Did Department of Defense (DOD) "whistleblowers" reveal what a headline claims were "mind-blowing COVID-19 vaccine injury numbers"? Yes, they did, but their figures were based on a comparison with what the Pentagon says were under-reported medical data from years preceding COVID-19 vaccines. A Pentagon spokesperson says the data has been taken "offline to identify and correct the root-cause of the data corruption."

A January 24, 2022, panel discussion hosted by Sen. Ron Johnson of Wisconsin exposed some attention-grabbing figures on miscarriages, cancer and neurological issues that were attributed to the Defense Medical Epidemiology Database (DMED) and brought to the attention of attorney Thomas Renz by three military physicians, whom he identified as whistleblowers. Because the numbers from preceding years were, according to the Pentagon, under-reported, their comparison to 2021 appeared to be exaggerated.

While the Democrats struggle to fix Joe Biden's public image and continue to push the COVID-19 jab, members of the GOP like Senator Ron Johnson are digging into the supposed pandemic and the data being suppressed from the general public. Since taking office, the Biden administration has been adamant about getting the jab and how it is the best option at fighting the virus.

However, recently, attorney Thomas Renz, who represents COVID-19 whistleblowers, spoke at a panel hosted by Senator Johnson. Instead of bashing the Democrats or Biden, Renz presented data showing the effects the jab could be having on the American people.

In the video, which is featured below, Renz detailed how data suggested that miscarriages have seen a 300% increase over the five year average. Following that same timeline, the attorney also revealed cancer is up 300%. Although such a high percentage can be alarming, when it came to neurological issues, the data introduced by Renz showed a 1000% increase. 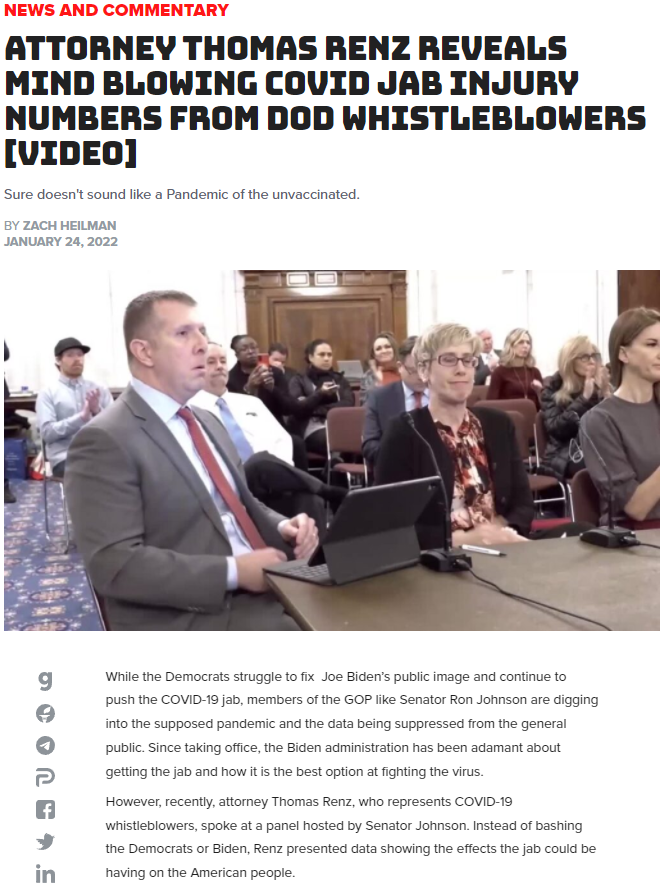 Renz has boosted his profile among COVID skeptics with federal lawsuits challenging coronavirus vaccines. America's Frontline Doctors, an anti-vaccine activist organization known to publicize unfounded and false medical claims, calls him part of their "Legal Eagle Dream Team." He appeared on January 24, 2022, in the panel discussion hosted by Johnson. At 33 seconds into the video embedded in the article, Renz credited the data he presented at the event to military physicians Lt. Col. Theresa M. Long, Lt. Colonel Peter Chambers and Dr. Samuel Sigoloff. Renz said:

Long and Chambers are part of lawsuits suing the Pentagon to stop its vaccine mandate.

In a February 1, 2022, email, DOD spokesperson Maj. Charlie Dietz said a review of the data contained in the DMED database was completed following a Lead Stories request on the whistleblower numbers. The review found the "data was incorrect for the years 2016-2020" and under-reported the numbers for that five-year span:

The CDC recommends a COVID vaccine for everyone 5 and over and says COVID vaccination is safe for pregnant people. There is no 300% increase in miscarriages:

UCI Health, the teaching hospital for the University of California, Irvine School of Medicine, says you can't get cancer from a COVID shot. Cancer isn't up 300%:

Do the COVID vaccines cause cancer?

The COVID vaccines do not cause cancer. In fact, scientific advancements have allowed these types of vaccines (mRNA vaccines and adenovirus vector vaccines) to treat cancer. The way these vaccines work is to provide an instruction set to make a protein. When used to treat cancer, these vaccines work to create proteins similar to those on the surface of cancer cells so that the body learns to recognize them as non-human and fights against them. In the same way, the COVID vaccines make the COVID-19 spike protein and help the body make antibodies and fight against the virus. The vaccine is not alive and cannot infect or change our cells.

The National Institute of Neurological Disorders and Stroke recommends COVID vaccination for almost everyone. There is no tenfold increase in neurological issues:

Scientists are studying the risk to benefit ratio of the vaccine in someone who previously developed Guillain Barré syndrome after a vaccination. The general sense is the COVID-19 vaccine is safe in individuals whose Guillain-Barré syndrome was not associated with a previous vaccination.

Guillain-Barré syndrome (a rare neurological disorder in which the body's immune system damages nerve cells, causing muscle weakness and sometimes paralysis) has occurred in some people who have received the Janssen [Johnson & Johnson] COVID-19 Vaccine. In most of these people, symptoms began within 42 days following receipt of the Janssen COVID-19 Vaccine. The chance of having this occur is very low.

The CDC website acknowledges that "serious adverse events after COVID-19 vaccination are rare but may occur" and must be reported to the Vaccine Adverse Event Reporting System (VAERS):