Is ivermectin "effective" against the omicron variant of COVID-19 in Phase 3 clinical trials? No, that hasn't been proven: The incorrect information comes from a January 31, 2022, Reuters story that was later updated by the news organization. The original story misstated that ivermectin was "effective" against omicron in Phase 3 clinical trials, which are conducted in humans. The story was corrected to say that the "anti-parasite drug ivermectin showed an 'antiviral effect' against Omicron and other coronavirus variants in joint non-clinical research," which is conducted in a lab. Despite the update, COVID skeptics and anti-vaccine activists shared the outdated information to back their cause.

The claim appeared in a Facebook post (archived here) by "The Joe Rogan Experience Podcast" on January 31, 2022. It opened:

JUST IN - Japan's Kowa in partnership with Kitasato University at Tokyo Medical University says ivermectin is effective against Omicron in phase III trial. 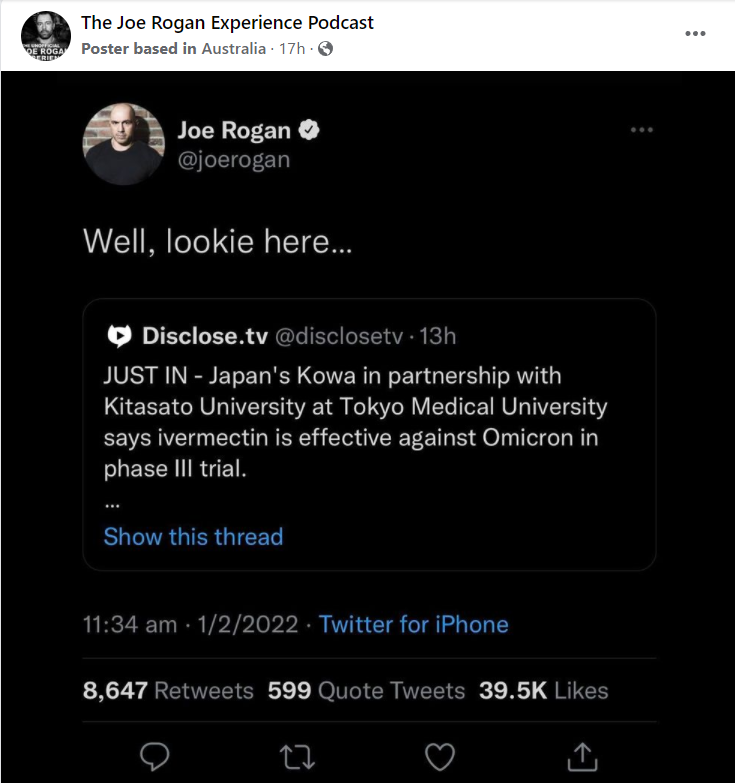 Podcaster Joe Rogan tweeted the outdated information from the Reuters story hours after it was corrected. The last update shown for the article at the time of publication was January 31, 2022, at 2:30 p.m. EST on the Reuters website:

The timestamp on the Joe Rogan tweet is 11:34 a.m. on February 1, 2022. The screenshot of the post was taken in Australia, where The Joe Rogan Experience Podcast, a fan page of the show, is based. In Australia, they reverse the month and date. In the United States, February 1, 2022, would be written 2/1/2022, but in Australia, it would be 1/2/2022. That's the way it appears in the Facebook post from earlier in this fact check. Taking into account the time difference, the post was made on the evening of January 31, 2022, in the United States, still hours after the correction appeared on the Reuters website.

The Reuters story was based on a news release by Kowa, a Japanese pharmaceuticals company. The release, translated from Japanese through Google Translate, says Kowa is conducting a Phase 3 human trial of ivermectin as a possible treatment for COVID. Those results aren't known yet. The release also says the anti-parasite drug showed an "antiviral effect" against omicron and other coronavirus variants in the lab. While many drugs have proven to work in a test tube, the outcome often can't be replicated in the human body.

In its updated version, Reuters said, "The original Reuters story misstated that ivermectin was 'effective' against Omicron in Phase III clinical trials, which are conducted in humans. Clinical trials are ongoing, but promotion of ivermectin as a COVID-19 treatment has generated controversy."

Ivermectin is a widely prescribed medicine around the world. Ivermectin tablets are approved by the U.S. Food and Drug Administration to treat certain infections caused by internal and external parasites. In addition, some topical forms of ivermectin are approved to treat external parasites like head lice and for skin conditions such as rosacea. The drug is not approved to treat any viral infection. On August 26, 2021, the Centers for Disease Control and Prevention issued an official health alert: