Does a viral photo show the Japanese ambassador to Ukraine dressed as a samurai? No, that's not true: The photo depicts the Ukrainian ambassador to Japan: Sergiy Korsunsky. Korsunsky posted the photo to social media ahead of Russia's invasion of Ukraine.

The Japanese ambassador to Ukraine stayed in Kiev. His great-grandfather's samurai sword and traditional armor was delivered to him from Tokyo, Japan. In a FB post, he declared that the samurai must protect the country in which he is! 'Glory to Japan! Glory to Ukraine!' 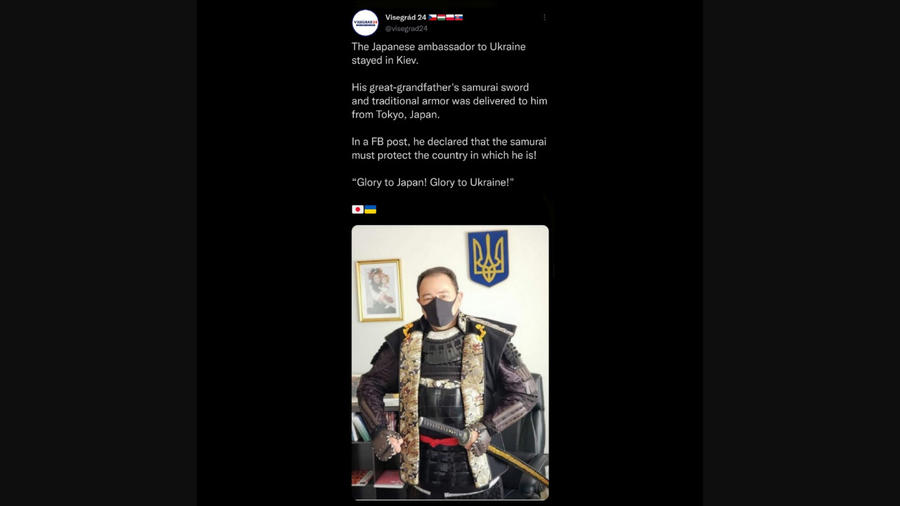 Korsunsky posted the photo on social media earlier this month, ahead of Russia's invasion of Ukraine, as can be seen below:

We know what we are fighting for. How about Russia?
私たちは何のために戦っているのかを知っています。ロシアはどうですか？ pic.twitter.com/8FEInU3bWn

He also took to social media to dispel the rumors that cropped up online after his photo was posted. On Facebook, on February 23, 2022, Korsunsky wrote:

Again and again I'm asked to rebuke that strange fake that went out around the world. Here's the original tweet from February 15. Target audience - Japanese who understood everything perfectly. You can see the stats. How could it be considered here that this is my kind and respected colleague Ambassador of Japan to Ukraine Mr. Kuninori - I don't understand, but this is my last attempt to refute the fake, I have no time to do it.

TruthOrFiction.com, a fact-checking website, similarly did a debunk of the viral photo. You can read its story here.