Does a video show a massive thermobaric explosion in Cherkasy Oblast captured on video on February 27, 2022? Some of these details may be confusing, incorrect or unconfirmed, but other details about what happened are coming together. Reports that this was a thermobaric bomb -- also known as a vacuum bomb because of its high-temperature blast and prolonged blast wave -- are unconfirmed.

Cherkasy is the name of both a city and an oblast, or territory, in Ukraine. This has caused some confusion. The explosion took place in the Cherkasy Oblast near the town of Rozsishky, about 125 miles from the city of Cherkasy. The location where the video was made has been geolocated, and the camera was pointed in the direction of an ammunition depot when the blast happened.

Available satellite imagery shows that a large explosion took place in this area between February 21 and February 26, 2022. Local news reported the blast at military warehouses near Rozsishky at 5 a.m. local time on February 24, 2022. The video did not begin to circulate widely on social media until February 27, 2022.

The video was posted on YouTube on February 27, 2022, by the channel "Top 5 The World" under the title "Ukraine War - Massive Thermobaric Blast In Cherkasy Oblast Reported." It opened:

Witnesses reported a massive blast in Cherkasy Oblast, Ukraine tonight.
Also video footage from a visible massive explosion that lit up the night was recorded.
The blast apears to be a what is belived to be a thermobaric explosion of a Russian TOS-1 rocket hit on a Ukrainian munitions depot.
This however can not be confirmed at the time.
Still important for you to know what happened.
Russia, frustrated by early battlefield setbacks in Ukraine, could be shifting its strategy to siege warfare just as President Vladimir Putin raises the risk of a catastrophic miscalculation by putting nuclear forces on heightened alert, a senior US defence official said on Sunday.

This is how the video appeared on YouTube at the time of writing: 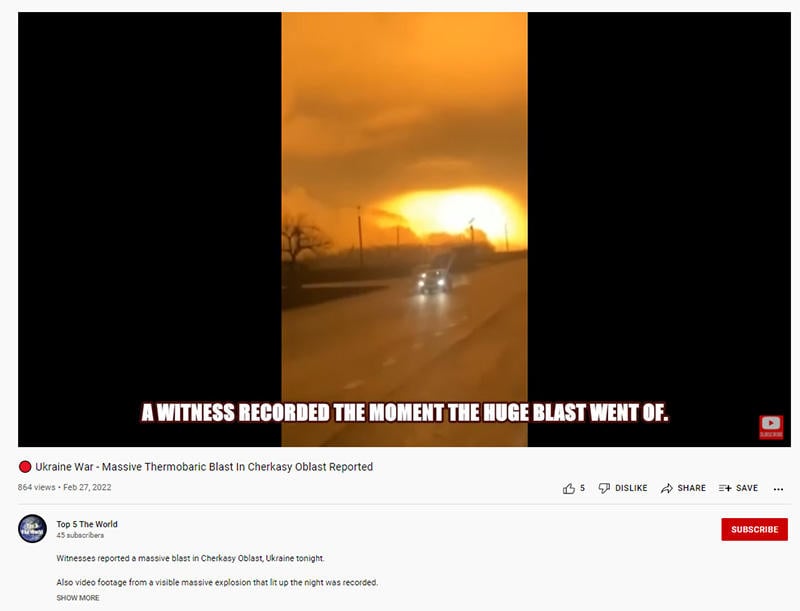 The timing and location of the blast was further confused by some social media posts. On February 27, 2022, the same day the video of the blast surfaced, a Facebook post from Oleksandr Skichko, governor of the Cherkasy Oblast, showed the video with text overlay that said, translated, "NOT CHERKASY! FAKE." The post was captioned:

❗️❗️WARNING❗️❗️
This video is NOT Cherkasy.
Don't spread FAKE! 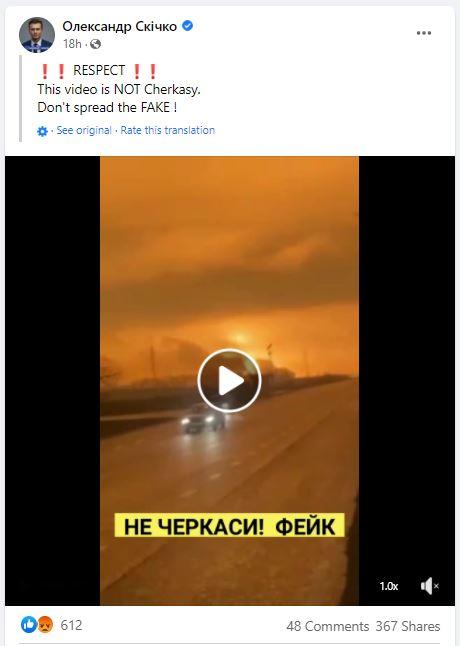 On the first night of the Russian Invasion of Ukraine, in the early hours of February 24, 2022, Skichko posted several messages (here and here) on Facebook to the residents in the region near the city of Uman. He said there were going to be evacuations from the area around the military unit, which is 30 kilometers (18½ miles) from Rozsishky and that military facilities, including another in Dubíivka, were under attack. The following day another post by Skichko said:

❗️ATTENTION❗️
Traffic towards Vinnytsia has been restored. The hub of the emergency is localized.
In the Uman region, I will remind you that the day before military facilities were attacked, resulting in fires in warehouses. 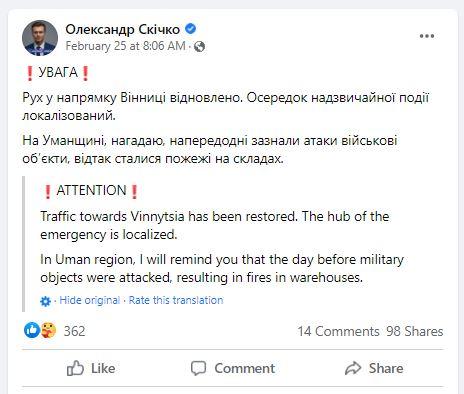 The attack on the military facilities near Rozsishky was reported on February 24, 2022, by the Ukrainian news website segodnya.ua in an article titled, "People are being evacuated en masse in Cherkasy region due to shelling, many wounded (photo)," which began:

There was an air attack on the military unit and warehouses near the village of Rozsishky.

Evacuation of people began in Cherkasy region. It happened after the shelling of a military unit near Uman. It is known about the dead and wounded.

In total, more than a thousand people were evacuated. More than 400 were taken out of Uman region. At 5 am, a military unit and warehouses near the village of Rozsishky were attacked there. After that, people within a radius of 30 km began to be evacuated.

On February 27, 2022, open-source investigator John Marquee published a tweet describing how he was able to geolocate the exact place where this video was filmed. The tweet contains a side-by-side image comparing a daytime Google Street View image to the night-time video at the moment when various landmarks at the intersection were illuminated by the explosion. The location of the video was identified first, before it was understood the explosion happened before February 27, 2022.

Another thread on Twitter by Christiaan Triebert pulled together many of the individual pieces open-source investigators contributed to identifying and verifying the location and timing of this video.

There have been concerns that Russia was preparing to use thermobaric weapons in Ukraine, but at the time of writing, there have not been any verified incidents.

Lead Stories has reached out to an explosives expert to learn if the video footage or reporting gives an indication of the type of bomb shown in this video and will update this article if appropriate.