Does this video show military action or shelling in Ukraine on February 24, 2022? No, that's not true: This is a recording from the video game War Thunder.

War Thunder was released in 2016. Several copies of this video game clip were posted on social media when Russia invaded Ukraine in February 2022. One example is a Facebook post published on February 24, 2022, by Grindface TV. It was captioned:

This is how the post appeared on Facebook at the time of writing. Many comments called the video out as fake and one comment identified War Thunder by name.

A short screen capture video of the game was posted on YouTube on December 15, 2021, titled, "The Iron Dome in War Thunder #shorts" with this caption:

This was the final segment in the countdown for the latest teaser. Cover your heads!

This is how the game footage appeared on YouTube: 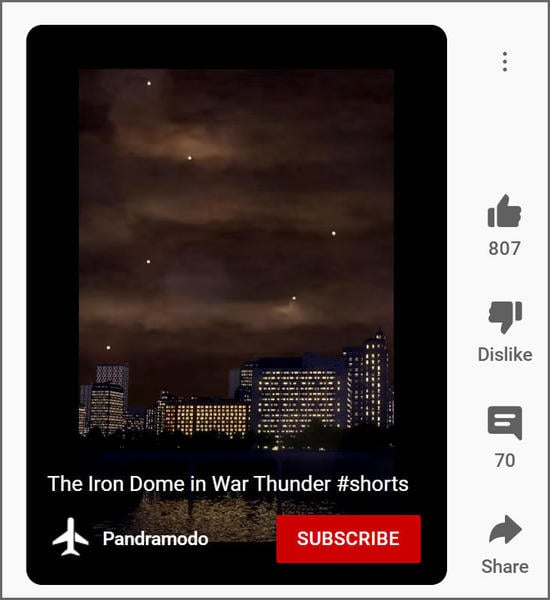 Iron Dome is the name of a real air defense system. It's described here on army-technology.com:

Iron Dome is an effective, truck-towed, multi-mission mobile air defence system developed by Rafael Advanced Defence Systems. The system has been developed to counter very short-range rockets and 155mm artillery shell threats with ranges of up to 70km. It can be operated in all weather conditions including fog, dust storm, low clouds and rain.