Did former President Donald Trump pass a bill in 2017 that increased tax rates for taxpayers making $75,000 or less starting in 2021 and ending in 2027? No, that's not true: Although an analysis of the 2017 Tax Cuts And Jobs Act (TCJA) suggested that the tax rate would increase for low-income earners in 2021, that analysis is misleading. 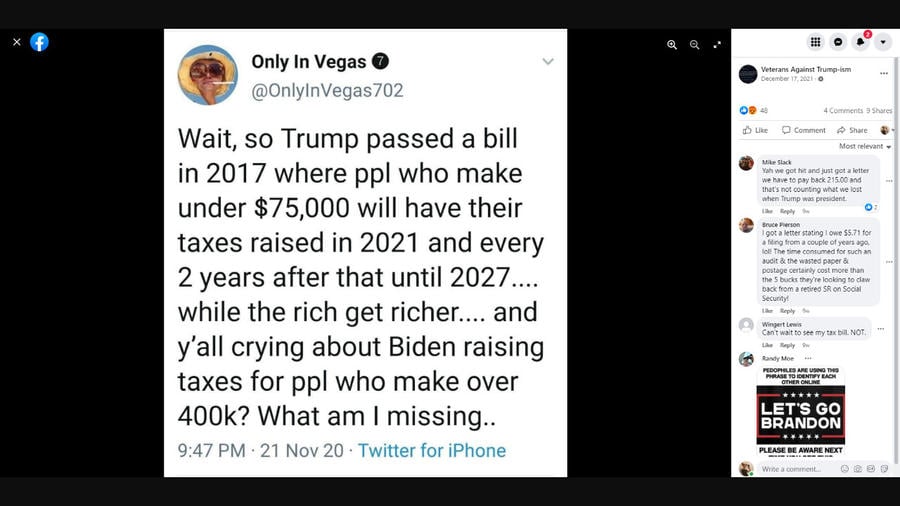 According to the Twitter thread from the user who published the tweet, the claim was made based on an opinion article published by The New York Times and written by Joseph Stiglitz, a Nobel laureate in economics. The article cited information (shown in a screenshot from the Tax Foundation here) from the Joint Committee on Taxation (JCT) to support its assertion of the tax increase. Stiglitz said:

However, other independent, nonpartisan tax experts did not share this perspective. Both the Tax Foundation and the Urban-Brookings Tax Policy Center reported that the TCJA allowed for tax cuts for most individuals between 2018 and 2025. In an article published on November 18, 2020, by Garrett Watson, a senior policy analyst at the Tax Foundation, Watson explained that a change to the Affordable Care Act's individual mandate played a role in the figures presented by the JCT:

While it is important to consider the impact of the TCJA on premium tax credits and health insurance take-up, it is misleading to call this effect a 'stealth tax increase.' The decline in premium tax credits has nothing to do with a change in tax rates or the generosity of the credits as established under the ACA, but rather due to voluntary decisions individuals make about whether to purchase qualified health insurance.

In an email to Lead Stories on February 22, 2022, Kyle Pomerleau, a senior fellow at the American Enterprise Institute who studies federal tax policy, reaffirmed that the TCJA actually cuts taxes for most individuals from 2018 to 2025. He explained that there are tax increases for businesses between 2020 and 2025:

However, Pomerleau noted that implementation of the TCJA still resulted in tax cuts for businesses in aggregate: