Did a news report accidentally reveal that doctors are giving a "banned" COVID-19 treatment to Queen Elizabeth? No, that's not true: Due to an editing error, the Australian program "A Current Affair" featured a clip showing a bottle of Stromectol, a brand name for ivermectin, along with the intended clip of Sotrovimab. The error was acknowledged and clarified on the station's website 9now.nine.com.au. The Australian doctor who was featured in the program, who is not treating the queen, also published a tweet calling attention to the editing error and linking to the correct information.

"A Current Affair" aired in Australia on February 21, 2022, with footage of the wrong medication thanks to a human editing error. Rumors began spreading on social media that Queen Elizabeth was being treated with Stromectol. An example is a short video clip published on Rumble by The Charlie Kirk Show on February 21, 2022. The video clip is titled, "News Report Accidentally Reveals Doctors Giving 'Banned' COVID Treatment to the Queen" (archived here). It opened:

(Pause at 0:19)
For more exclusive interviews, insight, and analysis like this, SUBSCRIBE to The Charlie Kirk Show TODAY: https://apple.co/2VCxGsh

In the short clip posted on Rumble, Dr. Mukesh Haikerwal speaks in general terms about people in their 90s and treatments for COVID. This is the transcription of the video clip:

Haikerwal: People in their 90s are at significant danger of the bad outcomes of COVID.

Narrator: Dr. Mukesh Haikerwal says a COVID patient the Queen's age should be isolating and might benefit from new medicines currently approved for high-risk patients at Australian hospitals.

Haikerwal: These tablets or these infusions can make a dramatic difference to their immediate welfare and health and how they feel but also their long-term benefits as well.

Narrator: Is it possible for a person in the 90s to have a mild case of COVID?

During this segment the footage switches from Haikerwal walking through a hallway to two brief shots of medications. The narration does not mention any medication by name, only describing them as "new medicines currently approved for high-risk patients at Australian hospitals." The image on the left below shows the approved infusion medication called Sotrovimab. The image of Stromectol on the right was accidentally included.

A Current Affair published a tweet on February 21, 2022, that announced an update. 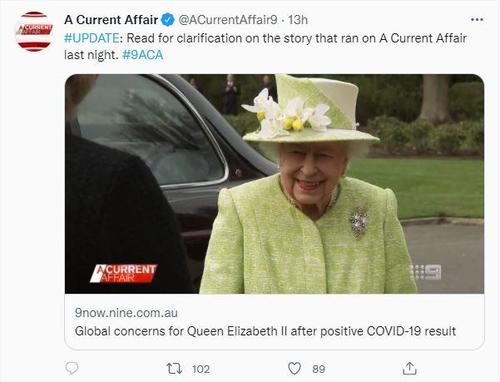 Last night our report on the Queen contained a shot that should not have been included.

The shot was included as a result of human error.

We were highlighting an approved infusion medication called Sotrovimab and the report accidentally cut to a shot of Stromectol - a product which contains Ivermectin.

As a program we've done numerous stories highlighting the concerns around taking Ivermectin as a treatment for COVID-19.

We did not intend to suggest Dr Mukesh Hawikerwal endorsed Stromectol.

We've apologised to him this morning and he has accepted that apology.

We do not suggest the Queen is using Ivermectin.

Haikerwal also published a tweet that includes a link to an article about the new COVID anti-virals on the Royal Australian College of General Practitioners website. Haikerwal's tweet says:

This is the list of medication that is used in Australia for definite treatment for COVID-19. I understand images inadvertently inserted into the @ACurrentAffair9 will be removed during the course of today. The channel has been alerted.