Images showing the plane with United Nations markings began to surface on February 19, 2022. One video originally posted on TikTok (and then retracted) continues to circulate on Twitter. Another example, a video shot after the sun went down, was posted on YouTube and also on Facebook on February 20, 2022, by "Truckers for Freedom 2022." It was captioned:

A United Nations Plane Has Been Reported to Be Parked in North Bay, Ontario, Canada 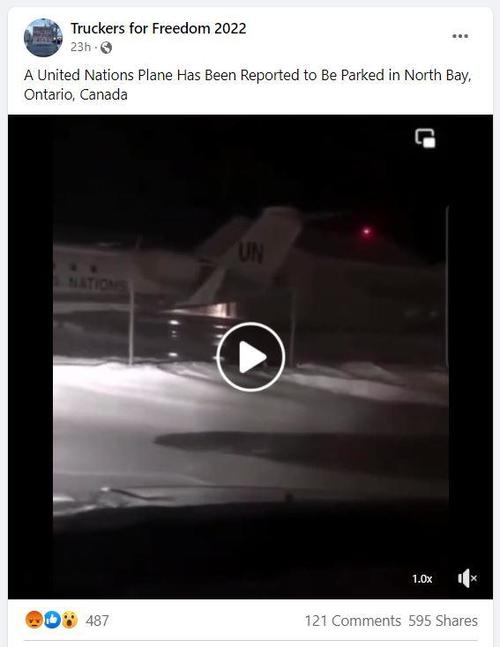 The narrator of this video says:

I seen a video online and I thought I'd come check it out for myself and here we go -- United Nations plane right here in North Bay. I wonder where all those cops in Ottawa came from? And there is no snow on it, it just snowed last night.

Another video posted on Twitter (archived here) on February 20, 2022, has narration that says:

This is not the first time that rumors have been spawned by the sighting of a U.N. airplane in North Bay. On December 5, 2018, factcheck.afp.com published a fact check titled, "A UN-sponsored migrant 'invasion' in Ontario? No, just routine plane maintenance." This article addressed rumors that the media was hiding an "invasion" after a U.N.-marked airplane was sighted in North Bay on November 28, 2018.