Did Nigeria send over 5,000 "military forces to Ukraine"? No, that's nothing to substatiate such a claim: The Nigerian federal government has discouraged Nigerian citizens from joining Ukrainian military forces, as of March 7, 2022. The Ministry of Foreign Affairs of Nigeria reports that some citizens have volunteered to join Ukrainian troops but doesn't say how many.

Also, the Armed Forces of Ukraine does not list Nigeria as one of the countries that make up the volunteers for the International Legion of Territorial Defense of Ukraine.

The claim appeared in a YouTube video on March 5, 2022, by the channel The Daily Unseen under the title "Nigeria Sends Over 5,500 Military Forces to Ukraine." At 0:05, it opened:

At least 5,000 mercenaries and 200 special forces from Nigeria have decided to enlist in Ukraine according to the Ukrainian embassy in Nigeria.

This is how the video appeared on YouTube at the time of writing: 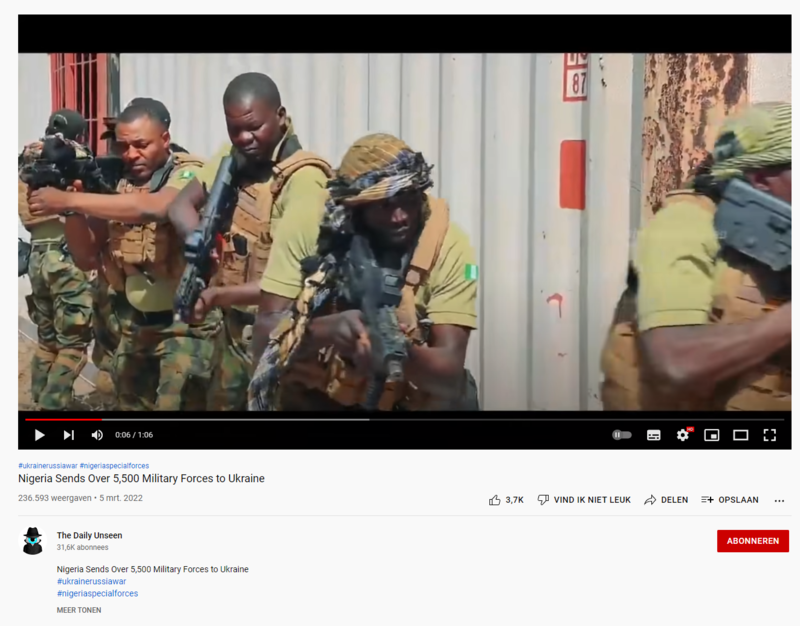 This channel does not provide any reputable sources to confirm its claim that over 5,000 Nigerian military forces were sent to Ukraine.

A Google search using the keywords, "Are Nigerian Soldiers Helping Ukraine Fight Against Russia?" produced this March 7, 2022, article by The Guardian, titled "Nigerians blocked from volunteering to support Ukraine's fight against Russia" and this March 7, 2022, Africa News article titled, "Russia-Ukraine conflict: Nigerians banned from joining fight in Ukraine." The Africa News article cites a tweet from the Ministry of Foreign Affairs with a press release that says some Nigerians have approached the Ukrainian Embassy in Nigeria to volunteer but does not say whether any of them belong to the armed forces. In part, it reads:

As a responsible member of the international community and consistent with our obligations under international law, Nigeria discourages the use of mercenaries anywhere in the world and will not tolerate the recruitment, in Nigeria, of Nigerians as mercenaries to fight in Ukraine or anywhere else in the world.
The Federal Government will continue to engage with the Embassy of Ukraine in Nigeria and other relevant authorities to prevent this possibility. 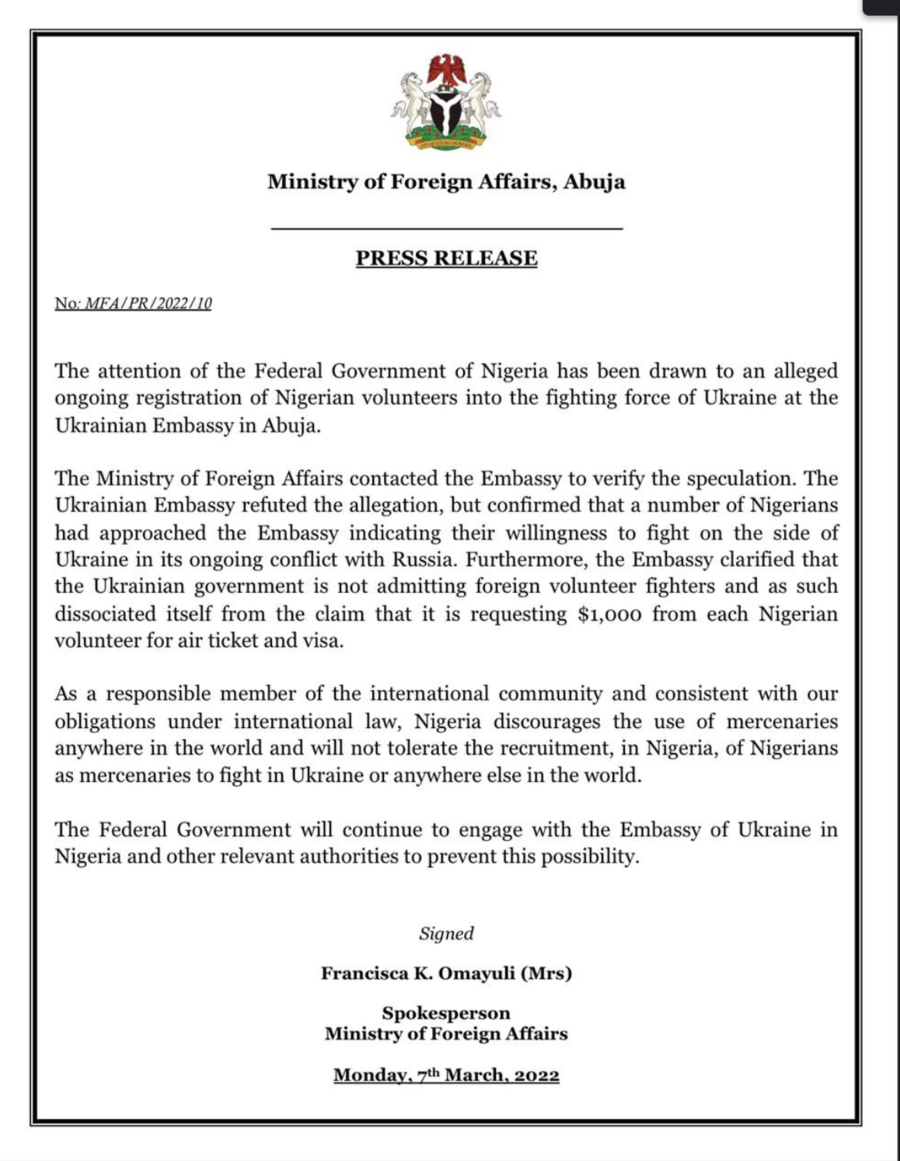 A March 7, 2022, tweet by the Armed Forces of Ukraine says that the first volunteers of the International Legion of Territorial Defense of Ukraine came from the U.S., Britain, Sweden, Lithuania, Mexico and India -- no mention of Nigeria.

A Google search of terms found in the video like, "The fact that Kyiv is actively attracting foreign mercenaries to counter the Russian special operation indicates that a number of countries around the world are escalating their opposition to Russia" and "At least 5,000 mercenaries and 200 special forces from Nigeria have decided to enlist in Ukraine according to the Ukrainian embassy in Nigeria" have produced no results that substantiate this claim.