Did Nathaniel Rothschild write a letter to members of the British government calling Russian President Vladimir Putin "the most dangerous man since the defeat of Hitler"? No, that's not true: "This is utterly untrue and completely fabricated," a spokesperson from Rothschild's investment company told Lead Stories.

Heir to the Rothschild family, Nathaniel Rothschild, today wrote to members of the British government, giving his view that Vladimir Putin is 'the most dangerous man since the defeat of Hitler, with Xi Jinping a close second,' and explained that, 'Ukraine is an essential piece that we cannot afford to lose, in the geopolitical chessboard.' 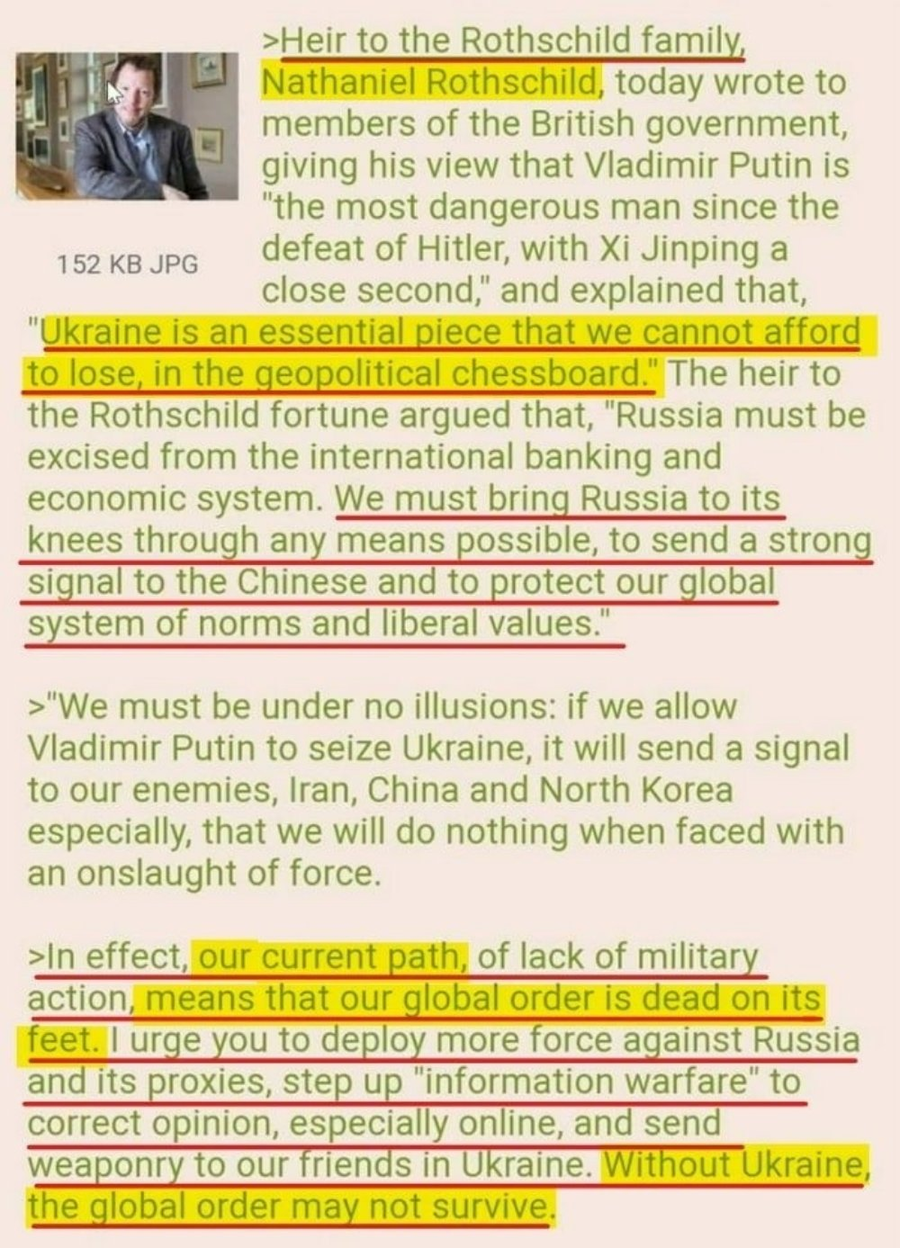 The heir to the Rothschild fortune argued that, 'Russia must be excised from the international banking and economic system. We must bring Russia to its knees through any means possible, to send a strong signal to the Chinese and to protect our global system of norms and liberal values.'
'We must be under no illusions: if we allow Vladimir Putin to seize Ukraine, it will send a signal to our enemies, Iran, China and North Korea especially, that we will do nothing when faced with an onslaught of force. In effect, our current path, of lack of military action, means that our global order is dead on its feet. I urge you to deploy more force against Russia and its proxies, step up "information warfare" to correct opinion, especially online, and send weaponry to our friends in Ukraine. Without Ukraine, the global order may not survive.'

THE WAR FROM THE UKRAINE... HE REALLY IS THE ROTHSCHILD !
On the 1st date. 03. 2022, Nathaniel Rothschild, the youngest son of Iacob Rothschild , draws the attention of the British government to the danger Putin represents, along with Xi Jinping for the "good" walk of the (hell) New World Order. A little must be knocked down as a warning signal for the Chinese leader. , declaring that the confiscation of Ukraine by Putin, will encourage the other suitable states NOM.... Iran, China and North Korea at the uprising, the reason why the British government urges the British government to deploy more fighting forces and weapons of Ukraine, because without Ukraine, NOM will not survive.
What must be known to everyone, is the fact that Ukraine from 2017, became the property of Rothschild, as it is in fact Romania since Dec. '89! (via Simon Petru)

A spokesperson for Rothschild told Lead Stories via email on March 8, 2022: "Thank you for bringing this to our attention - this is utterly untrue and completely fabricated. Nat Rothschild has written no such letter."

The Anti-Defamation League has published reports regarding the antisemitic conspiracy theories about wealthy Jewish families owning all the world's banks:

In more recent years, the antisemitic notion that 'the Jews' dominate and command the U.S. Federal Reserve System and in effect control the world's money has surfaced across the extremist spectrum.

A section in the report titled, "The Rothschild Connection," says, "In the literature of bigots, the name Rothschild is a trigger for the most explosive of antisemitic tremors, and it usually sets off a litany of other Jewish names." The article continues: