Was there an air battle over Chukchi Sea between Russian MiG-31 fighters and a U.S. RC-135 aircraft on March 12, 2022, as claimed by a title on a video posted on Facebook? No, that's not true: This clickbait headline overdramatizes a true incident that happened on May 6, 2021. This was not a "battle" involving shooting down planes as suggested by the thumbnail image: A U.S. reconnaissance plane over the Chukchi Sea was escorted away from the Russian border by a Russian MiG-31. The footage in the video includes a wide variety of shots from different sources and times. 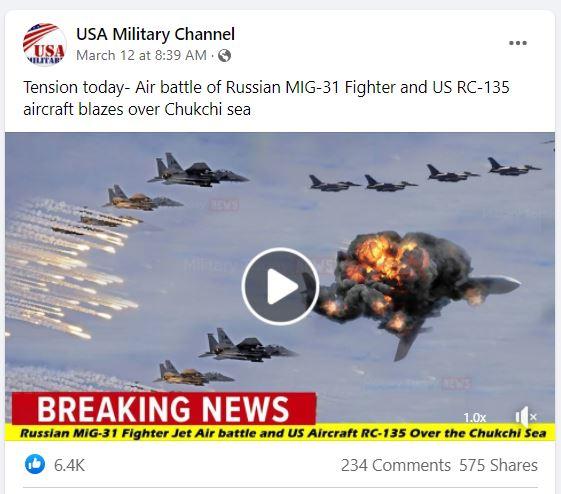 On May 6, 2021, the Russian news agency tass.com reported on the incident in an article titled, "Russian fighter scrambled to intercept US spy plane over Chukchi Sea - defense ministry." The article quotes a report from Russia's National Defense Management Center:

'A MiG-31 fighter from the Pacific Fleet's air defense quick reaction alert forces was scrambled to identify an aerial target and prevent Russia's state border violation. The crew of the Russian fighter identified the aerial target as a US Air Force strategic reconnaissance aircraft RC-135 and escorted it over the Chukchi Sea. After the US reconnaissance plane moved away from Russia's state border, the Russian fighter safely returned to its home airfield,' the Center said. 'The entire flight of the Russian Su-30SM fighter proceeded in strict compliance with the international rules of using the airspace. The Russian border was not violated.'

This video is watermarked with the name of the YouTube channel Military Today News and was also posted on that channel on March 12, 2022. The video is a collection of military aircraft images from a variety of sources. A clip of a MiG-31 firing its engines at 0:58 appeared on YouTube as far back as September 2017.

The script for the robo-voice narration is taken word for word from the May 6, 2021, newsweek.com report of this incident over the Chukchi Sea, with a significantly deceptive difference. At the 1:05 mark in the video on Facebook, the narration says:

The incident is Russia's latest intercept of an American aircraft. In January, Russia's Defense ministry released footage of a MiG-31 fighter accompanying an RC-135 over the coast of Kamchatka in Russia's far east.

Only days earlier, a Russian MiG-31 fighter jet escorted the same kind of U.S. reconnaissance aircraft over the Pacific Ocean.

Moscow has warned that the increased reconnaissance activities near Russia pose the risk of an accidental escalation as tensions simmer between Russia and the West.

The original Newsweek article does not say January, but April. Were the narration to say April, it would be clear to the audience watching the video in March 2022 that this story is from sometime in the past and could not be a current event.

At 1:37 in the video, the narration begins to discuss Russian helicopters. Lead Stories found the text of that block of narration on a news and variety blog that appears to originate from Hong Kong, min.news. The min.news blog article published on March 11, 2022, contains some satellite images of the Russian helicopters in Belarus near the border of Ukraine. These same images also appear in a February 25, 2022, article in militarytimes.com titled, "New images show about 150 helicopters, large ground force 100 miles from Kyiv," that reported:

New satellite imagery shows several large deployments of ground forces and rotary-wing aircraft in southern Belarus, roughly 20 miles from the Ukrainian border and less than 100 miles from Kyiv, the capital of the besieged nation.