Were documents published that confirm Moderna created the COVID-19 virus? No, that's not true: Bala Ambati, a University of Oregon research professor and one of the authors of those documents, told Lead Stories, "We are not casting aspersions on any person, company, or country, but rather raising the hypothesis that recombination in a human cell line with a lab leak could be the origin of SARS-Cov2."

The claim appeared in an article (archived here) published by The Exposé on March 14, 2022, under the title "Whilst you were distracted by the Battle for Ukraine, Documents were published confirming Moderna created the Covid-19 Virus." It opened:

Evidence has emerged which proves beyond a reasonable doubt that the Covid-19 virus was created by the very pharmaceutical giant that has made billions through the sale of an experimental Covid-19 injection; Moderna. 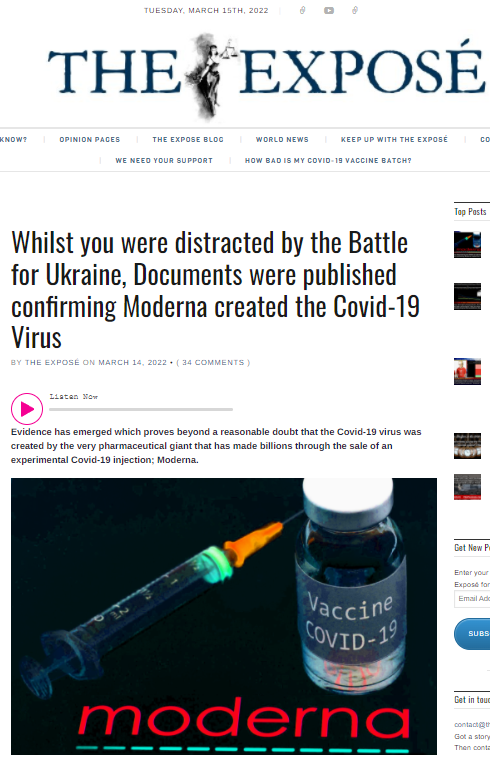 The claim that documents were published that confirmed Moderna created the COVID virus was based on reporting by the Daily Mail, which was based on an article published in the journal Frontiers in Virology: "MSH3 Homology and Potential Recombination Link to SARS-CoV-2 Furin Cleavage Site." A unique furin-like cleavage site (FCS) in the spike protein of COVID-19 (SARS-CoV-2) is responsible for its high infectivity and transmissibility.

In a March 16, 2022, email to Lead Stories, Ambati, as the lead author of the article, explained the reason behind it:

Our peer-reviewed article was published as a perspective, the main purpose of which was to stimulate discussion. We understood from the beginning that this match [between a tiny gene sequence patented by Moderna and the COVID virus] could be random chance and stated this in the article very prominently. What stimulated our interest was not that the sequence was from Moderna, and not that there were other matches in the BLAST database, but rather that it matched the reverse complement of a synthetic and likely human codon optimized MSH3 mRNA. This led us to the idea that it was possible that there could have been recombination in a human cell line containing this mRNA and a SARS-like virus to produce the FCS. Potential experiments could come from this perspective to test this hypothesis.

In more simple language, the hypothesis is COVID-19 may have been created in a lab. Ambati continued:

Our only interest is seeing if an experiment could be designed to test our hypothesis. If such an experiment resulted in the acquisition of an FCS, especially from a synthetic mRNA sequence, it would quite interesting. However, there are multiple other hypotheses that propose a lab leak that are supported indirectly, that probably have a better basis at this point than ours. There are also many hypotheses for a natural spillover which also have reasonable bases as well. The issue with most of these hypotheses is that they are not prospectively testable. We want to stimulate discussion amongst all concerned on both 'sides' of the issue to try to produce prospective experiments that can prove or disprove their hypotheses.

Ambati said their article was not intended to name a scapegoat:

We are not casting aspersions on any person, company, or country, but rather raising the hypothesis that recombination in a human cell line with a lab leak could be the origin of SARS-Cov2.

Ambati is an ophthalmologist at Pacific Clear Vision Institute and is a research professor at the Knight Campus at the University of Oregon.

Lead Stories requested a response to the claim from Moderna but had not received one at the time of writing. Lead Stories has previously published stories showing no clear evidence that COVID-19 was made in a lab (here, here, here and here).