Does a disproved meme using an old photo of Ukraine's President Volodymyr Zelenskyy imply that he must have left the capital city of Kyiv in early March 2022? Does the Russian chairman of the State Assembly, Vyacheslav Volodin, know that Zelenskyy is in Lviv, in western Ukraine, and if not there, that he must be in Poland? No. In the absence of evidence that he is anywhere else, as of this writing Zelenskyy maintains that he has been in the capital city Kyiv and has posted videos filmed in unmistakable Kyiv locations.

The article (archived here) published by waronfakes.com on March 4, 2022, under the title "Fake: Zelensky refused to evacuate," starts:

What is fake about:

In her Instagram Kim Kardashian admired words of Zelensky's, who refused to evacuate and asked to bring him ammunition. 'America offered to evacuate him, but he refused. He said, "I don't need to run, I need bullets,"' Kardashian wrote. The model added that she is proud of those who make efforts to become the best version of themselves. This post was immediately replicated by Ukrainian telegram channels.

This is how the waronfakes.com article appeared at the time of writing: 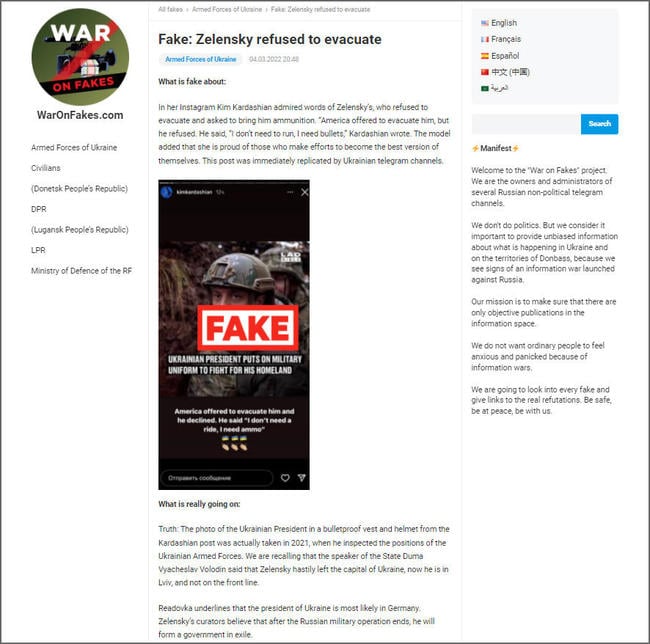 Waronfakes.com is a new website registered on March 1, 2022, and hosted in the Russian Federation. This website says in its manifest, in part:

Welcome to the 'War on Fakes' project. We are the owners and administrators of several Russian non-political telegram channels.
We don't do politics. But we consider it important to provide unbiased information about what is happening in Ukraine and on the territories of Donbass, because we see signs of an information war launched against Russia.

The meme at the center of this article was posted to Kim Kardashian's Instagram Stories, a feature that only lasts for 24 hours before disappearing. The meme bears the watermark of the website LADbible, but the original post of that meme is not currently visible on the LADbible Facebook page either. The photo of Zelenskyy is real, but it's from 2021 -- any caption implying that it shows a current scene is misleading.

Lead Stories also published a fact check about a misleading caption on that photo of Zelenskyy wearing a helmet and armored vest visiting Ukrainian troops in 2021. In that instance, a February 25, 2022, post of the photo was captioned:

Ukraine's president on the front line due to the tension of Ukraine and Russia!

But posts with misleading captions on social media are not proof that the president of Ukraine has evacuated, as the waronfakes.com post implies. When the United States offered to evacuate Zelenskyy from Kyiv, his reply was relayed to the public through a tweet from the Embassy of Ukraine to the United Kingdom on February 26, 2022. It read:

'The fight is here; I need ammunition, not a ride.' - @ZelenskyyUa on the US evacuation offer.

Ukrainians are proud of their President💙💛

That same day, February 26, 2022, Zelenskyy posted a selfie video of himself speaking from the street with an ornate building as a backdrop. The caption translates, "Don't believe the fakes."

This building is the Gorodetsky House, or "The House with Chimeras." This Art Nouveau building, designed by architect Vladislav Gorodetsky, is decorated with sculptures of animals. The building isn't merely a unique Kyiv landmark -- it is directly across Bankova Street from the Office of the President of Ukraine.

A day earlier, on February 25, 2022, Zelenskyy posted a selfie video along with other government officials, filmed at night. In the background the columns of the facade of the Office of the President show on the left, and the Gorodetsky House on the right. The Facebook post was captioned:

We are here. We are in Kyiv. We are defending Ukraine

Good evening everyone. The leader of the faction is here. The head of the President's Office is here. Prime Minister Shmyhal is here. Podolyak is here. The President is here. All of us are here. Our military is here, citizens and society are here. We are all here, defending our independence, our state. It will continue to be so. Glory to our men and women defenders.
Zelensky: Glory to Ukraine.
Others: Glory to the Heroes.

The second half of this waronfakes.com article fails to make a conclusive case that misleading social media posts of a year-old photo mean the president of Ukraine has left the country. They wrote:

What is really going on:

Truth: The photo of the Ukrainian President in a bulletproof vest and helmet from the Kardashian post was actually taken in 2021, when he inspected the positions of the Ukrainian Armed Forces. We are recalling that the speaker of the State Duma Vyacheslav Volodin said that Zelensky hastily left the capital of Ukraine, now he is in Lviv, and not on the front line.

Readovka underlines that the president of Ukraine is most likely in Germany. Zelensky's curators believe that after the Russian military operation ends, he will form a government in exile.

The same day this waronfake.com article was published, March 4, 2022, Speaker of the State Duma Vyacheslav Volodin posted on Telegram that Zelenskyy could not be found in Lviv and "Now he is in Poland." This also fails to make a case for Zelenskyy's whereabouts.

On March 7, 2022, Zelenskyy posted another video. This one opened with a handheld shot looking out at Kyiv at night, the ornate roofline of the Gorodetsky House on the right side of the frame. As he speaks, Zelenskyy turns and films the passages and gilded woodwork of the building as he walks to his office. He takes a seat at his desk, and while continuing to speak, puts his phone down and addresses another camera. The film has one cut from the selfie view to the formal view of the president at his desk. The Facebook post is captioned:

I stay in Kyiv.
On Bankova Street.
I'm not hiding.
And I'm not afraid of anyone.
As much as it takes to win this Patriotic War of ours. 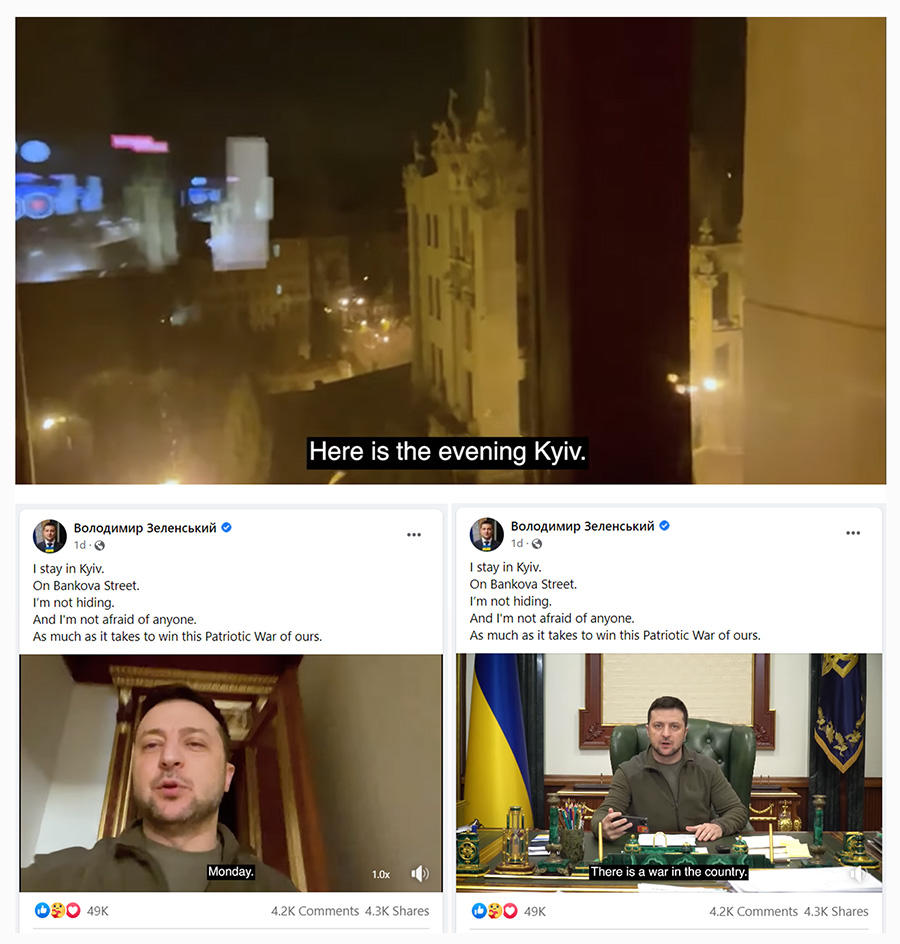 Zelenskyy has also been photographed in an undisclosed location in Kyiv that has been described as a bunker. This is where he signed an application for Ukraine to become a member of the European Union on February 28, 2022 (here and here). On March 1, 2022, Zelenskyy met foreign journalists at that location (photo with CNN's Matthew Chance and CNN Video).

President @ZelenskyyUa has signed application for the membership of #Ukraine in the European Union.

This is a historic moment! pic.twitter.com/rmzdgIwArc