Was the "longest freshwater shark on record" found in Deep Creek Lake in Maryland? No, that's not true: A spokesperson for the Maryland Department of Natural Resources told Lead Stories this claim is "false" as "Deep creek lake is a freshwater man-made impoundment."

The claim appeared in a Facebook post (archived here) on June 7, 2017. Beside a caption that opens, "This is fucking weird," the post has a screenshot of a Google search using the keywords, "shark in deep creek lake." The text below the image in the post reads: 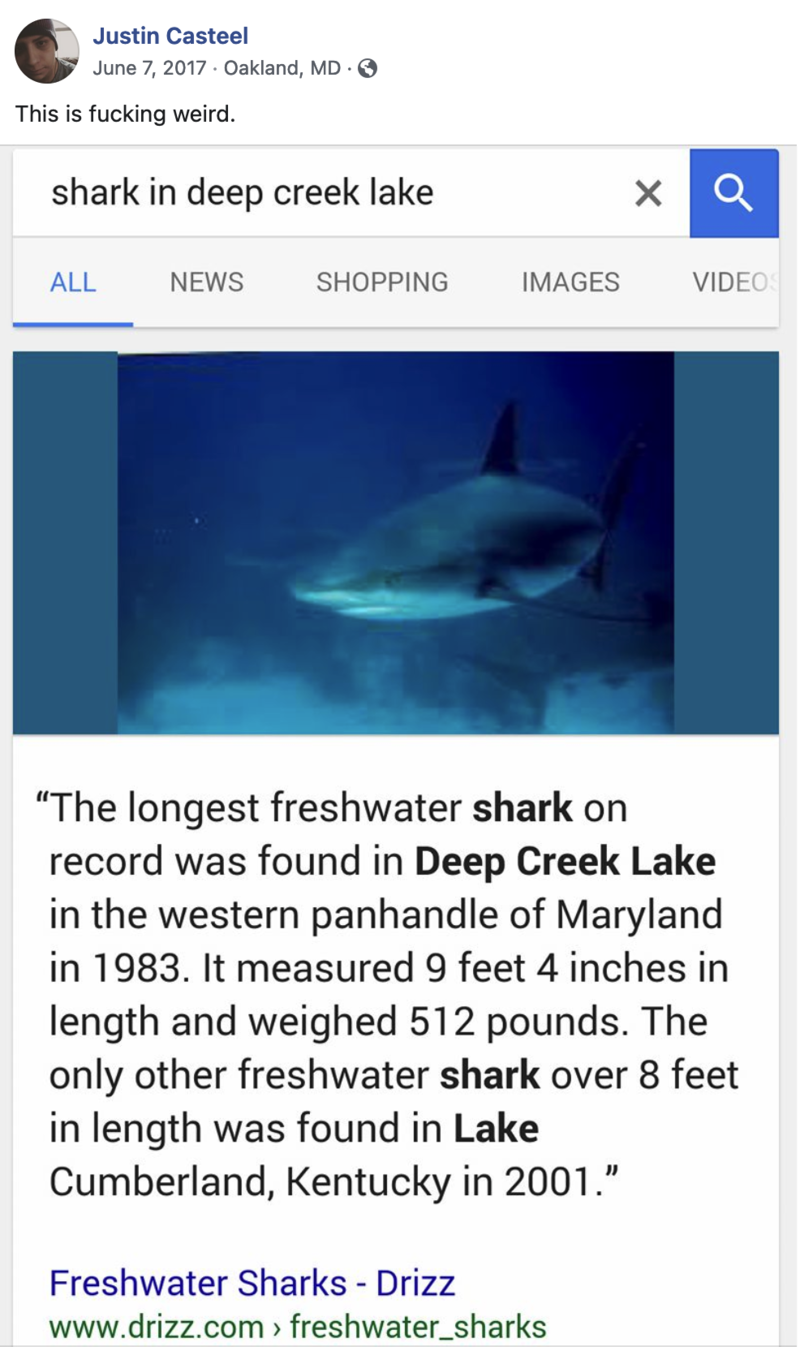 This fact check focuses on the portion of the claim that says a "freshwater shark" was found in Deep Creek Lake.

Lead Stories reached out to the Maryland Department of Natural Resources for more information regarding the claim's validity. In an email response sent to Lead Stories on March 24, 2022, Paul Peditto, the director of Wildlife and Heritage Service, told us:

False. Deep creek lake is a freshwater man-made impoundment. Sharks would not survive there. Lake was the same in 83.

Lead Stories reached out to California State University, Long Beach, marine biology professor Christopher Lowe concerning the type of "freshwater" shark depicted in the photo of this post. In a March 26, 2022, email, he replied:

The image in the photograph on facebook is a bit to fuzzy to tell for certain but that shark looks more like a Caribbean reef shark, which is common throughout the Caribbean. Nonetheless, that photo was taken of sharks on a coral reef and not in a lake.

In a March 27, 2022, email, Lowe also clarified what a freshwater shark can refer to:

Technically, there are no species of sharks that solely live in freshwater, but some species, such as the bull shark can live in freshwater for long periods of time (months to years) assuming sufficient resources. The bull shark is a true sharks (elasmobranch) whereas the 'freshwater shark catfish' often referred to as a freshwater shark' isn't actually a shark but is a teleost (bony fish) in the catfish family. These are often kept in fish tanks in people's homes and are quite small - only a few inches long.

A Google search using keywords found from the website in which this claim appears -- which does not list any credible sourcing otherwise -- reveals no duplicate results of some of the website's information.