Is this a photo of the Mariupol maternity hospital in Ukraine that Russia bombed on March 9, 2022? No, that's not true: The photo posted by the Twitter account of the Russian Embassy in Israel, purporting to show an intact and empty maternity hospital, has been geolocated. It is a picture of a building 10 kilometers (about 6.2 miles) from the actual hospital in Mariupol according to evidence supplied by Bellingcat, an international independent group of researchers, investigators and journalists.

Fake: Vladimir Zelensky on Instagram called Russia's strike on the Mariupol maternity hospital atrocity and said that children, their mothers and doctors are under the rubble.
Truth: The maternity hospital has not worked since the beginning of Russia's special operation in Ukraine. The doctors were dispersed by militants of the Azov nationalist battalion. 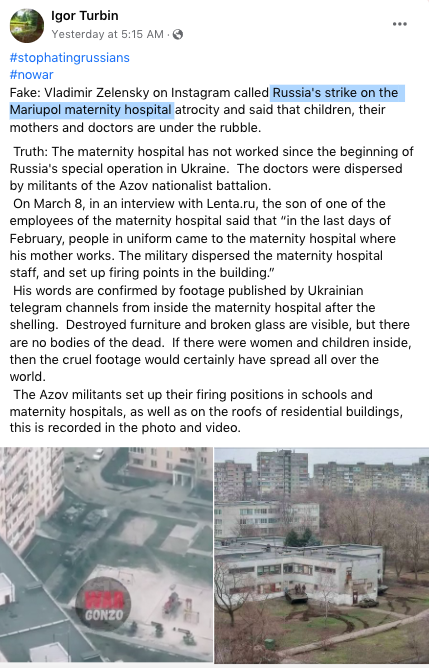 Bellingcat posted on Twitter on March 11, 2022, that this is not the Mariupol maternity hospital.

The Netherlands-based investigative journalism group was founded by British journalist Eliot Higgins who has been a senior fellow in the Atlantic Council's Digital Forensic Research Lab, a visiting research associate at the Centre for Science and Security Studies at the Department of War Studies at King's College London and a visiting research fellow at University of California Berkeley School of Law's Human Rights Center.

Bellingcat relied on an open source investigation carried out by @digitaljonah, who uses techniques Bellingcat developed and taught widely. By matching the shapes of the buildings in the Russian embassy's Twitter post and their spatial relation to one another (behind, in front, taller, etc.) the investigator created a unique set of shapes that do not match the Mariupol maternity hospital. Instead, publicly available photos of Mariupol, searched for the unique set of shapes, prove that the photo used by the Russian Embassy's Twitter account depicts a building more than six miles from the hospital bombed by Russia's army.

Color-coded for ease of use, @digitaljonah's illustration demonstrates the false claim made by Russia's Embassy in Israel Twitter account. 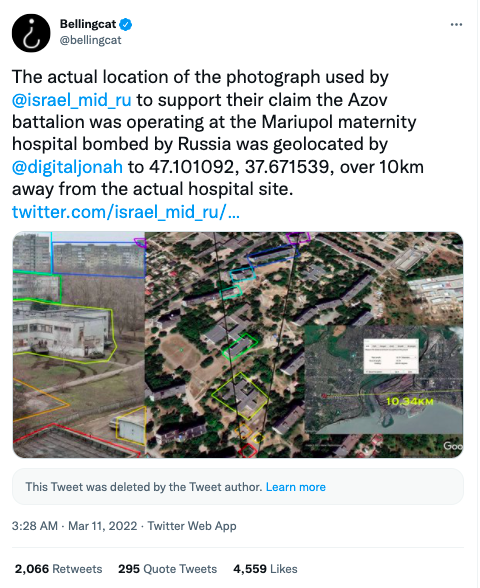 The original tweet attached to the account @israel_mid_ru has been taken down.
Other Lead Stories fact checks related to the 2022 Russia-Ukraine conflict can be found here.