Did NPR publish an article on the morning of January 6, 2021, about Trump supporters storming the U.S. Capitol and clashing with police before any clashes with police had occurred? No, that's not true: This intentionally deceptive post focuses on the National Public Radio article's original publication timestamp while cropping off the well-marked notice that the article had been updated later that day while the protesters clashed with Capitol police and stormed into the Capitol Building.

The NPR article was published on the morning of January 6, 2021, and updated later in the day. This update included new photos and a new headline. An image of this article was shuttled through several social media channels before becoming the backdrop for a TikTok video by @bruhmage (an account no longer available but replaced with new alt accounts). A copy of that TikTok video was then posted on Facebook on March 20, 2022, with no caption. The narrator of the 15-second-long video says: 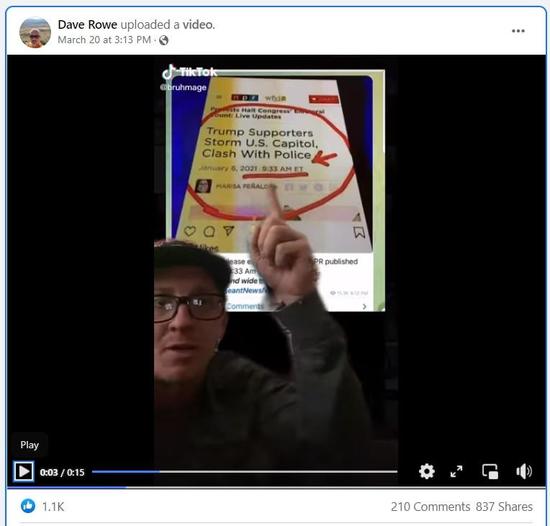 In the Lead Stories image below, this Facebook post has been deconstructed to show the path a screenshot of the NPR article traveled along the way. Screenshots are a common device employed in information laundering. Rather than share a URL link directly from the source, the person using a screenshot acts as a gatekeeper, only offering the selected picture and omitting what may be just beyond the frame. In this case, highlighting the incongruity between the headline and the timestamp of the article, but cutting off just before the viewer could see the clear bold "Update" notice that shows this NPR article was changed over the course of the day.

The screenshot was first posted on Instagram. The name of the Instagram account is not apparent. A photograph of that post was posted on Telegram by SargeantNewsNetwork, marked up with red circles and underlines. That became the background image in @bruhmage's TikTok video, which was then reposted on Facebook.

This NPR article was archived by webarchive.org 14 times on January 6, 2021. The Wayback Machine of the internet archive provides a record of how websites looked on certain days. Some websites are archived automatically, while other webpages are archived (for free) at the request of the public. A link to an archived copy of a web page is a much more reliable form of proof than a screenshot, as it records the whole web page, the URL, the date and time, cannot be altered and is open for anyone to view.

The image below (opens larger in a new window) compares screenshots of archived copies of the NPR article published on January 6, 2021. The timing of the archive snapshots (here, here and here) are not determined by the updating of the article, but it is possible to see several updates over the course of the day. The archive shows that when the article was first published at 9:33 a.m., the headline read, "Diehard Trump Supporters Gather In The Nation's Capital To Protest Election Results." 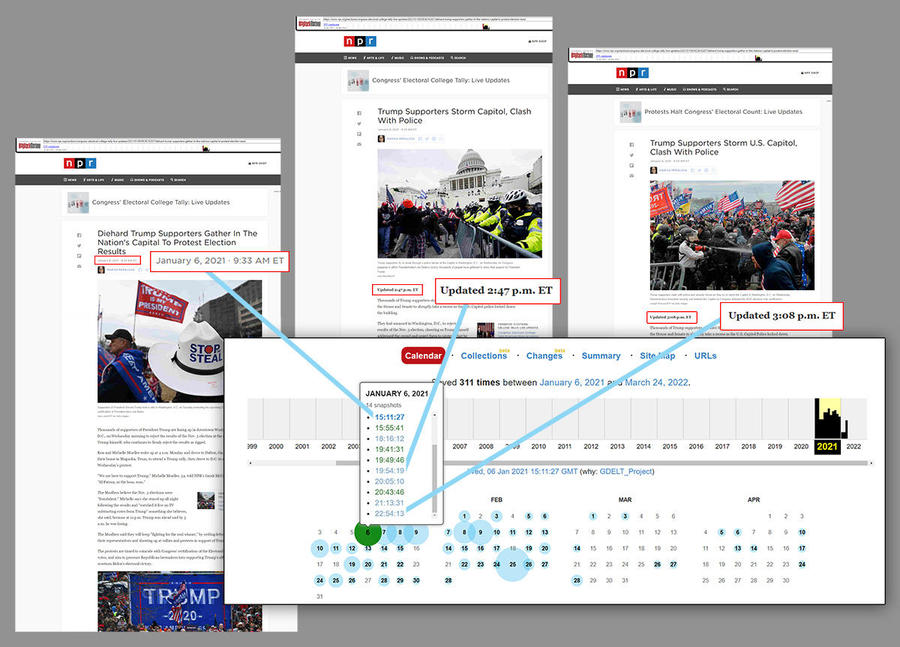 The article update published at 2:47 p.m. described the crowd pushing past barriers after the president addressed them "midday Wednesday." This part of the timeline was not something that NPR had to "admit" a full year later as proposed by the narrator of the TikTok video.

Trump supporters, many wearing red MAGA hats but no face masks, gathered at The Ellipse where the president addressed them midday Wednesday. The crowd faced the White House and a stage was flanked by two big 'Save America March' signs swayed to the beat of the Village People song 'Macho Man' and Michael Jackson's 'Billy Jean.'

After the speech, they pushed past barriers onto the Capitol grounds, while yelling, 'Whose Capitol? Our Capitol,' NPR's Hannah Allam reports. Police and other security put up more barriers and security layers as protesters breached the initial security layer. Protestors climbed the scaffolding, looking for any way in to get to the Capitol, Allam said, and armed police rushed in tackling them.