Did a pregnant crisis actor wear bloody makeup to play the role of several different injured pregnant women in order to be photographed in the aftermath of the real bombing of a "long non-operational maternity hospital" in Mariupol, Ukraine that was being "used by the Ukrainian Armed Forces and neo-Nazi Azov Battalion," as suggested in a tweet by the Russian Embassy in the United Kingdom? No, that's not true: Seventeen real people, including pregnant women at the hospital, were injured. Reports now confirm that three people, one of them a child, were killed. A pregnant woman identified by name in one of the Russian Embassy tweets and accused of being a crisis actor has now given birth to a girl. This beauty blogger with a large Instagram following was one of the people injured in the bombing of the Mariupol maternity hospital.

On March 10, 2022, the Russian Embassy in the U.K. posted two tweets that have been deleted by Twitter (they are archived here). The first opened:

FM #Lavrov on the #Mariupol attack: The maternity house was long non-operational. Instead, it was used by 🇺🇦armed forces and radicals, namely the neo-Nazi Azov Battalion. Moreover, #Russia warned #UN Security Council about this 3 days ago.

No, it's the indeed pregnant beauty blogger Marianna Podgurskaya. She actually played roles of both pregnant women on the photos. And first photos were actually taken by famous propagandist photographer Evgeniy Maloletka, rather than rescuers and witnesses as one would expect.

The tweets included images from the bombing and from the Instagram account of Marianna Podgurskaya. Two of the pictures posted by the Russian Embassy had a large red "FAKE" stamp over them. Lead Stories occasionally employs a similar device to avoid confusion.

In this case the "FAKE" label on these photos is the subject of this fact check. This is how the archived tweets appear: 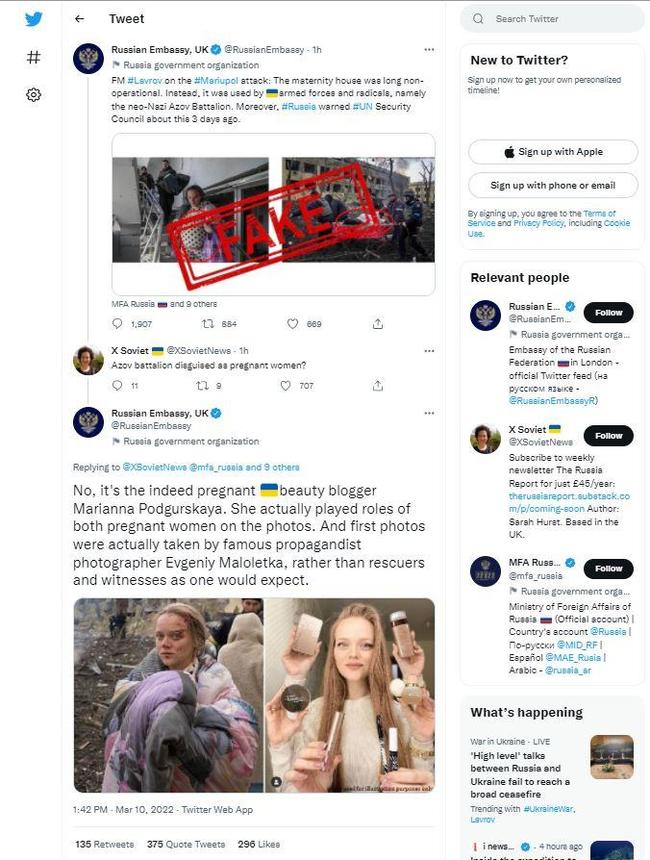 Photojournalists Evgeniy Maloletka and Mstyslav Chernov, both based in Ukraine, photographed and filmed the chaotic scene in the aftermath of the maternity hospital bombing on March 9, 2022. These photos, distributed through the Associated Press, are featured in many articles about the bombing.

The photos stamped "FAKE" in the tweet from the Russian Embassy show two different pregnant women who were photographed by Maloletka. The tweets imply that it was one actress who played the part of two women -- a pregnant woman being carried on a stretcher and the pregnant woman in polka dot pajamas descending the stairs with a blanket over her shoulders (shown here in a collection on cnn.com). They are not the same woman. These two women also appear in widely circulated video footage.

In the second tweet from the Russian Embassy, Chernov's photo of the woman standing wrapped in a blanket in the hospital courtyard is presented with a comparison photo taken from the Instagram page of the beauty blogger.

The Russian Embassy was not the only source of this false narrative. Below are some of the social media posts that push a crisis actor narrative. The Telegram post on the right names an entirely different woman, Anastasia Bagriychuk, as the purported crisis actor. The tweet from @soreiabtc repeats the claim that the two pregnant women photographed were played by the same Instagram model. They also suggest that a bucket of red liquid in a maternity ward bathroom, momentarily visible (timestamp 1:03) in one of the videos, is "fake blood." The city of Mariupol has not had power or water since at least March 3, 2022. The hospital posted a request for diesel and gasoline so they could keep operating on March 2, 2022. 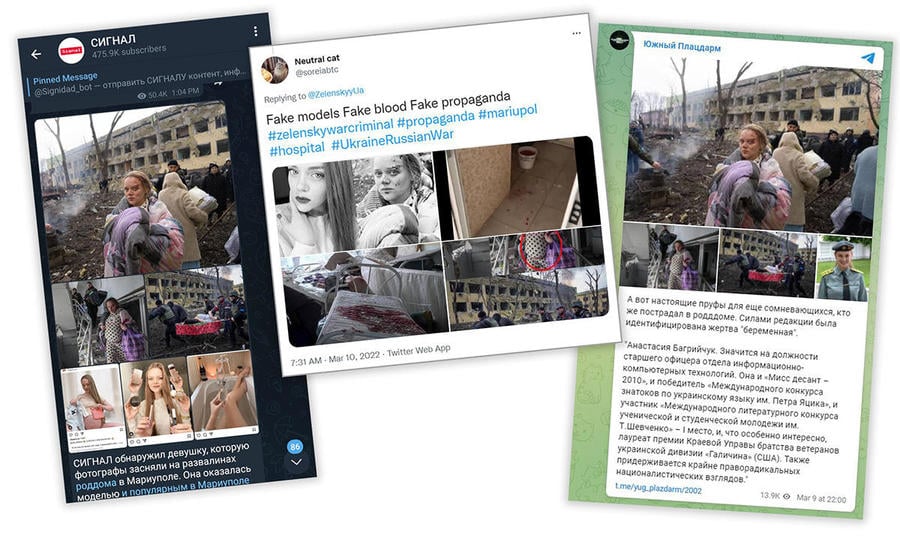 The news of baby Veronika's birth on March 10, 2022, was relayed through a relative, written up in thedailybeast.com (archived here) and a photo of mother and baby is included in the telegraph.co.uk article.

Lead Stories has not found an update on the unidentified injured pregnant woman who was carried on the stretcher.

The Russian Embassy tweet claimed that the maternity and children's hospital that was bombed was nonoperational and the facility was being used by Ukraine for military purposes. On March 9, 2022, the Russia in Israel account tweeted (deleted tweet archived here) photos of the bombed hospital, which is yellow and green, and a photo of a second hospital with tanks around it, which is white, as if they were one and the same hospital. An independent researcher was able to pinpoint the location of that second hospital, finding it was over 10 kilometers (six miles) away from the bombed hospital.

The actual location of the photograph used by @israel_mid_ru to support their claim the Azov battalion was operating at the Mariupol maternity hospital bombed by Russia was geolocated by @digitaljonah to 47.101092, 37.671539, over 10km away from the actual hospital site. https://t.co/uFuao8c1gm pic.twitter.com/ZaOP8jCnD6