Vladimir Putin has kept frequent contact with Donald J. Trump as Russian soldiers, aircraft, and warships continue to bombard eastern Ukraine, targeting not civilians but Western-sponsored bioweapons laboratories that zigzag the countryside like a child's connect-the-dots puzzle, a Mar-a-Lago source told Real Raw News. Our source emphasizes he is reporting only what Putin has told [...]

Vladimir Putin has kept frequent contact with Donald J. Trump as Russian soldiers, aircraft, and warships continue to bombard eastern Ukraine, targeting not civilians but Western-sponsored bioweapons laboratories that zigzag the countryside like a child's connect-the-dots puzzle, a Mar-a-Lago source told Real Raw News. Our source emphasizes he is reporting only what Putin has told [...]

While the article also claims that Putin has been in contact with former U.S. President Donald Trump, there is no public evidence to support that. This fact check will address only the claim of "Western-sponsored bioweapons laboratories" purportedly in Ukraine.

The claims in this article are simply not true.

Pope also said there are no U.S. bioweapons laboratories in Ukraine:

The Ukrainians own and operate their own laboratory infrastructure. The Department of Defense, through the Cooperative Threat Reduction Program, helps foreign partners like Ukraine with upgrading or building new labs that have the most modern equipment and training to be in compliance with International Health Regulations, and providing our foreign partners, like Ukraine, with safe and secure facilities to detect and identify disease outbreaks - before they become pandemics. Furthermore, Ukrainian Labs receive support and sponsorship from a range of international sources including the WHO, EU, and US Department of Defense.

Pope's email also included a link to this video to show the U.S. government's public response to such claims.

There is a treaty between the U.S. and Ukraine signed in Kyiv on August 29, 2005. In the agreement, the U.S. Department of Defense and Ukraine's Ministry agreed to cooperate

in the Area of Prevention of Proliferation of Technology, Pathogens and Expertise that could be Used in the Development of Biological Weapons.

But, as noted above, the labs are Ukrainian-owned and funded.

The U.S. Embassy in Ukraine previously posted a statement to its website on April 22, 2020, on such misinformation:

to set the record straight regarding disinformation spreading in some circles in Ukraine that mirrors Russian disinformation regarding the strong U.S.-Ukrainian partnership to reduce biological threats.

Here in Ukraine, the U.S. Department of Defense's Biological Threat Reduction Program works with the Ukrainian Government to consolidate and secure pathogens and toxins of security concern in Ukrainian government facilities, while allowing for peaceful research and vaccine development. We also work with our Ukrainian partners to ensure Ukraine can detect and report outbreaks caused by dangerous pathogens before they pose security or stability threats.

Other posts on social media also carried similar unsubstantiated claims, with no sourcing or evidence, such as this: 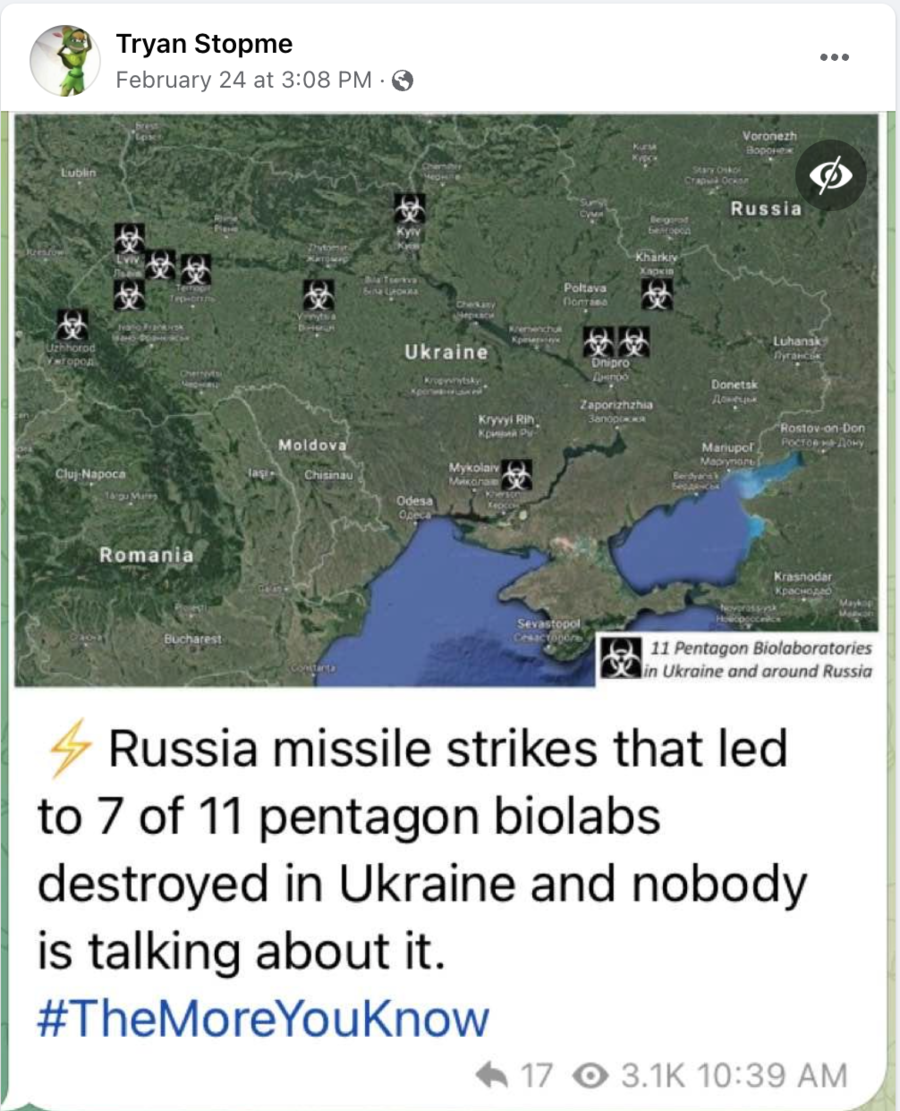 Other Lead Stories fact checks about the ongoing Russia-Ukraine conflict can be found here.