Does Ukraine produce 25% of the world's wheat crop? No, that's not true: The Food and Agriculture Organization of the United Nations (FAO) estimates Ukraine's annual wheat harvest at just over 3% of the global total. Ukraine accounts for 9% of the global wheat export market. Many of the world's largest wheat producers -- China, India, Russia and the United States -- also consume a large portion of their production domestically. Ukraine exports a larger share of its crop than other top producers.

So I'm sure you all heard that Ukraine grows 25% of the world's wheat? So @JoeBiden comes out n says we're to expect Food shortages ,ok! WHAT'S YOUR PLAN JOE? You Need to tell Americans what your gonna do to fix that!! Your Administration Has NO PLAN! For anything! 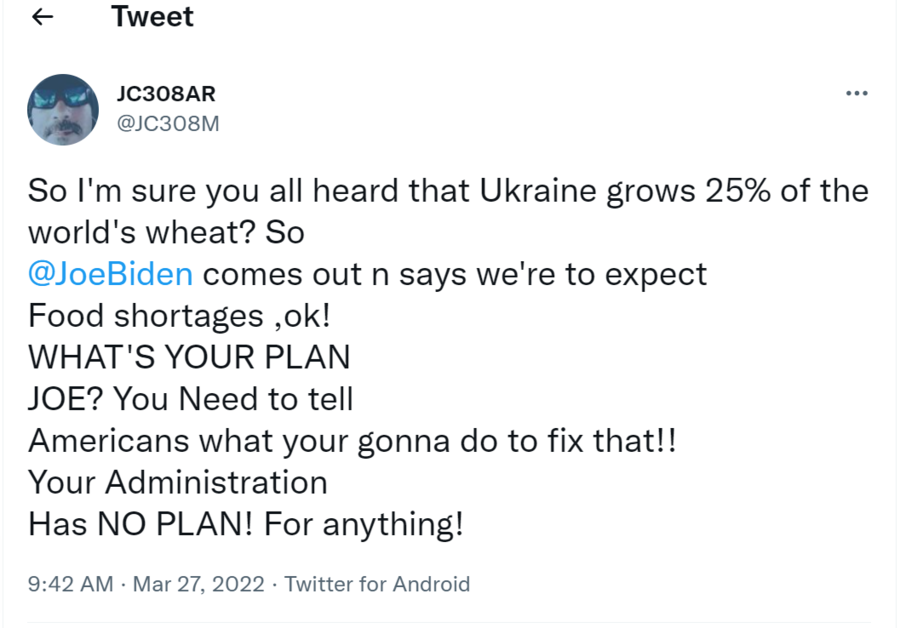 In a March 27, 2022, email to Lead Stories, Aaron Smith, a professor of agricultural economics at the University of California, Davis, said Ukraine grows nowhere near 25% of the world's wheat. Even when you add the loss of Russian wheat from world markets, the total falls well short of that mark:

Russia produces 11% of the world's wheat and Ukraine produces 3%. These countries make up a larger proportion of global exports. Russia accounts for 19% of the global wheat export market and Ukraine 9%.

This FAO graphic shows Ukraine was the No. 8 global wheat producer in 2020:

The claim in the tweet followed a press conference by President Joe Biden at NATO headquarters in Brussels on March 24, 2022. Speaking with reporters, Biden talked about his discussions with the leaders of the world's other leading industrial nations:

With regard to food shortage, yes, we did talk about food shortages. And -- and it's going to be real. The price of these sanctions is not just imposed upon Russia, it's imposed upon an awful lot of countries as well, including European countries and our country as well. And -- because both Russia and Ukraine have been the breadbasket of Europe in terms of wheat, for example -- just to give you one example.

But we had a long discussion in the G7 with the -- with both the United States, which has a significant -- the third-largest producer of wheat in the world -- as well as Canada, which is also a major, major producer. And we both talked about how we could increase and disseminate more rapidly food. Food shortages.

And in addition to that, we talked about urging all the European countries and everyone else to end trade restrictions on -- on sending -- limitations on sending food abroad. And so, we are in the process of working out, with our European friends, what it would be -- what it would take to help alleviate the concerns relative to food shortages.

Smith said some parts of the world may face food shortages, but that won't be the case for most nations:

We are not facing global food shortages. That said, some countries such as Egypt that have relied primarily on Russia and Ukraine for their wheat will face challenges finding new suppliers. These challenges may mean extra-high prices and shortages in those countries over the next few months.

Egypt imports 80% of its wheat from Russia and Ukraine, according to world-grain.com.

Russia's invasion of Ukraine on February 24, 2022, and the tensions leading up to it had dramatically increased the price of wheat on global markets. As of March 28, 2022, the grain was up 7.47% over the month and 68.50% over the year, according to Trading Economics.