Was a video recently leaked showing U.S. Marines and an international team of scientists on an Antarctic expedition to investigate three ancient pyramids, and did they explore inside the pyramids after they lost contact with their base? No, that's not true: This claim has two elements, the question of pyramids in Antarctica and the images of a mysterious military operation. There are real mountains in Antarctica that have striking pyramidal geometry, but they are natural landforms made by glaciers, not built by an ancient civilization or aliens. The photos accompanying this story are stills from a video that has been digitally altered. The altered video combines real 2017 footage of U.S. Army paratroopers doing a military exercise in Alaska, with pyramid images from some other source.

These claims have circulated online for several years and have recently resurfaced. One example is an article linked in a Facebook post (article archived here) that was posted by the Facebook page Strange Truth on March 24, 2022. It opens:

A team of European and American scientists found three pyramids in Antarctica in 2012.
Their audio and video lost contact with their base as they prepared to enter the first of the three pyramids, leaving them completely in the dark as they explored the pyramids.
Some suspect that this is merely a ruse to encourage them to visit the pyramids without having to inform their representatives, but none of this has been proved.
However, as you can see in the video below, a video of their expedition was recently leaked. 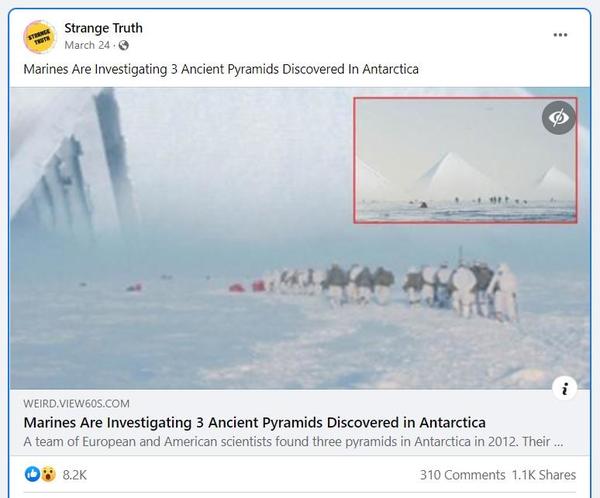 Claims about pyramids built by intelligent life forms in Antarctica were debunked by Snopes on August 24, 2017. Satellite images of the unnamed mountain, one of the Ellsworth Mountains in the Heritage Range, show that there is a mountain with a very interesting geometric shape. This view also shows that many nearby mountains have sharp and fairly straight ridges. These are formed by glaciers and are called arêtes.

A rather anticlimactic explanation came from Eric Rignot, a professor of Earth system science at the University of California, Irvine in a November 29, 2016, article on livescience.com:

This is just a mountain that looks like a pyramid. Pyramid shapes are not impossible -- many peaks partially look like pyramids, but they only have one to two faces like that, rarely four. 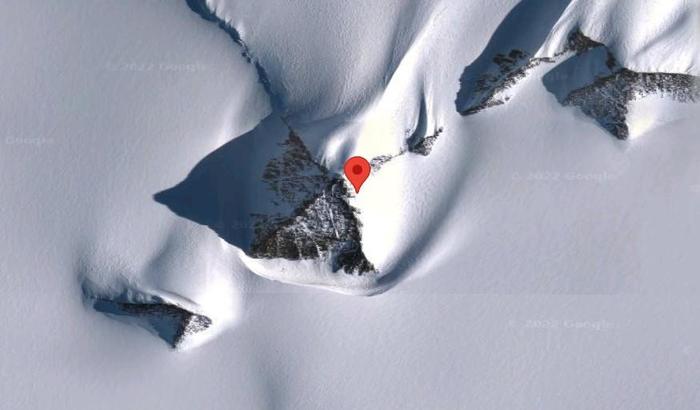 The article on wierd.view60s.com contains several images of what appears to be a military expedition in a polar landscape. Although the article references a video, no video is included with the article. Lead Stories was able to locate a "conspiracy styled" video in Russian language on the YouTube channel BELOGOR. This video, posted on November 26, 2021, contains some moving footage that shows scenes matching the images in the wierd.view60s.com article. The clips are repeated several times through the course of the video.

Lead Stories identified another YouTube video, this one posted on February 24, 2017, by AiirSource Military channel, titled "Paratroopers Parachute Into The Arctic," that contains the scenes featured in these conspiracy clips -- but without the pyramids in the background. The video description reads, "U.S. Army Paratroopers from 4th Brigade, 25th Infantry's parachute jump into Alaska." Lead Stories searched the U.S. Department of Defense video archive to verify this caption and date. There were two additional videos, the 2017 Spartan Pegasus B-Roll showing the paratroopers in the plane, and a teaser video from February 22, 2017, captioned:

The composite image below will open larger in a new window. On the left side are screenshots from AiirSource Military video. On the right side, outlined in red, are screenshots from the BELOGOR video that has pyramids added. The AiirSource video shows a line of soldiers carrying large packs and a helicopter in the distance. The BELOGOR video zooms in on that helicopter, which appears to be about to fly into a crystal pyramid cave -- that jagged structure was digitally added to the hazy landscape. 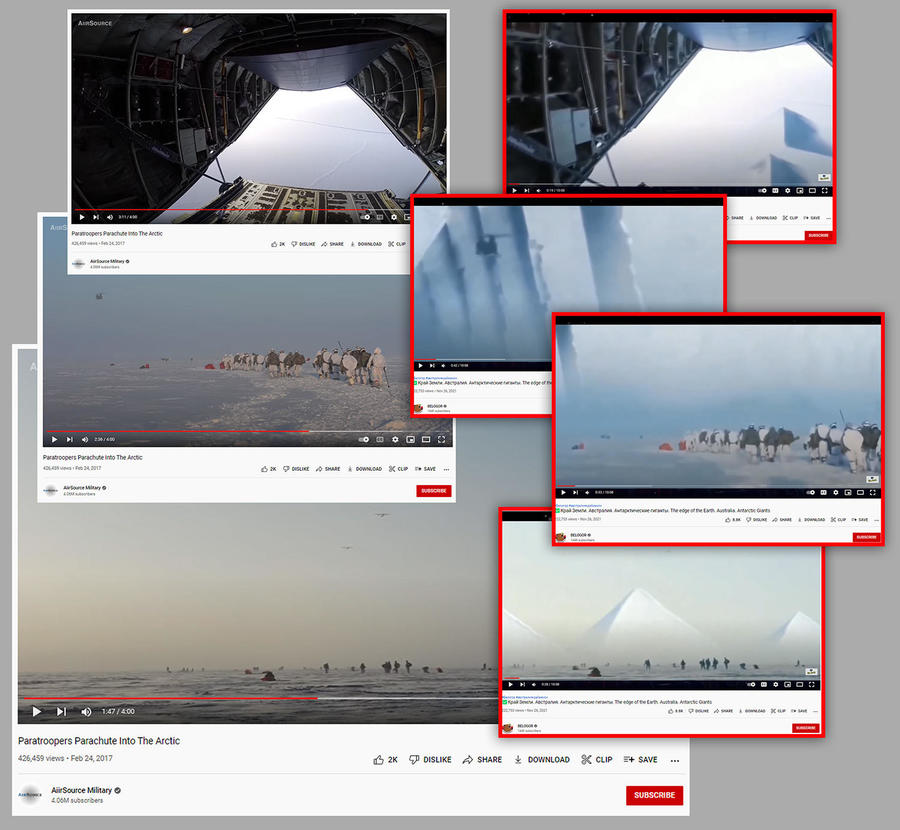 Lead Stories reached out to the U.S. Army media relations office at Joint Base Elmendorf-Richardson, Alaska, to verify the captioning on the independently posted Aiirsource Military video, and will update the article if appropriate.