Did President Joe Biden suck the country's Strategic Petroleum Reserve (SPR) dry -- and all for only a $.014 decrease in the price at the pump? No, that's not true: This meme is based on two false suggestions: that Biden's plan has exhausted the nation's SPR, and that the price per gallon reduction from Biden's plan has already been realized and is only $.014, or 1.4 cents.

On April 3, 2022, a meme posted to Facebook in the group "Conservative Political Cartoons" (archived here) used the viral "I did that" Biden gas pump sticker and was captioned: 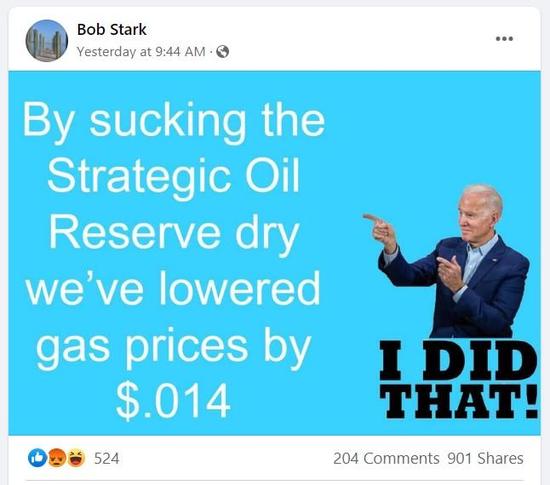 On March 31, 2022, Biden announced a plan to release 1 million barrels per day from the SPR for the next six months. The full transcript can be found at whitehouse.gov. The portion of his address (at the 7:08 mark) relevant to this Facebook post is excerpted below:

This is a wartime bridge to increase oil supply until production ramps up later this year. And it is by far the largest release from our national reserve in our history.

And we'll use the revenue from selling the oil now to restock the Strategic Petroleum Reserve when prices are lower so we'll be ready -- we'll be ready for future emergencies.

The Strategic Petroleum Reserve page on the energy.gov website links to a window showing updates about the current inventory. At the time of writing, the most recent update of the chart was March 25, 2022. It shows a total of 568.3 million barrels -- much more than the 180 million barrels Biden authorized to be released over the next six months. The meme misrepresents this as "sucking the Strategic Oil Reserve Dry." 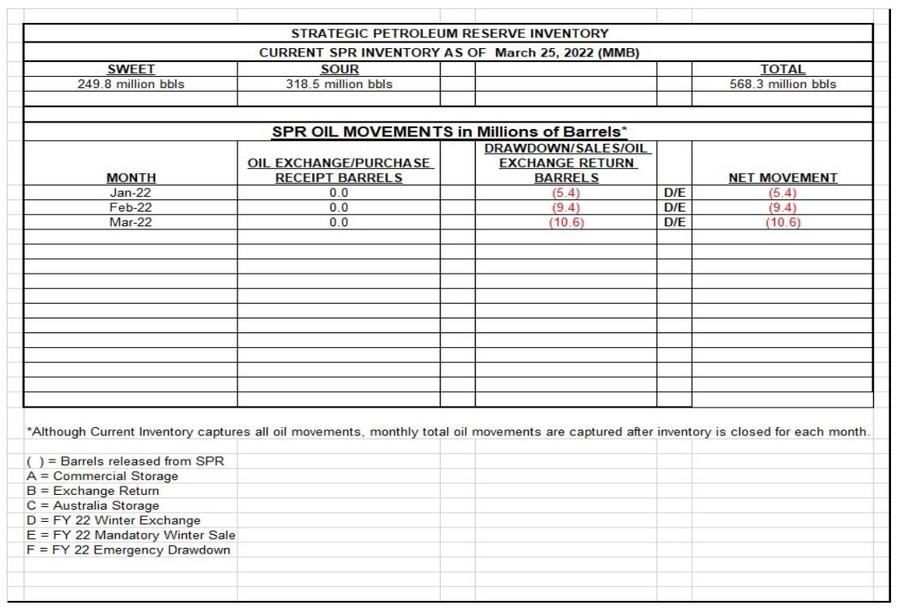 Because the meme lacks a source for the figure $.014, the second part of the statement is difficult to address directly. Lead Stories referenced the National Average Gas Prices chart on aaa.com. It is possible the meme has an error in the decimal point, and the intention was to say $.14 (or 14 cents). Between the all-time high average price per gallon of regular gas ($4.331 on March 11, 2022) and the average price of regular gas when the meme was posted ($4.192 on April 3, 2022) the average price of a gallon of gas fell $.139 -- almost 14 cents. Although this possible explanation of a decimal place error does find a similar number, it does not make sense as most of that price drop happened before Biden's announcement.

The average price of a gallon of gas had already fallen $.106 (10.6 cents) from the record high to the day of the announcement (archive of 03/31/22 AAA average gas price chart).

The average price drop between the announcement ($4.225) and the day the meme was posted ($4.192) -- is $.033 (3.3 cents). This is more than twice the $.014 in the meme, and only represents the first three days since the announcement of an 180-day plan. It is simply too early to say how much gas prices will change as a result of drawing from the SPR. Responding to a question from the press after his announcement, Biden said he anticipated that there would be a slight delay before the prices at the pump were lower:

And there's going to be a slight delay, because if you go out there and you're a gas station and you purchased X amount of gas at a certain price, you're not going to lower the price of the pump until you're able to get back what you invested. And that -- I'm talking a matter of, I think, you know, days and weeks. But it's hard to tell.

And the other thing is -- exact. But it will come down. And it could come down fairly significantly. It could come down the better part of -- you know, anything from 10 cents to 35 cents a gallon. It's unknown at this point.