Does a video in the Ukrainian city of Bucha show "corpses" waving and moving alongside a road? No, that's not true: Bodies laying along the street can be seen in a video taken after Russian forces pulled out of the town, but none move or wave. The video making that claim blurs images and distorts the scene by slowing the footage and taking advantage of the motion of a water droplet on a windshield.

The claim appeared in a video (archived here) published to YouTube on April 3, 2022, under the title "Bucha staged fake - one of the dirty bloody Kiev anti-Russian campaign." It opened:

All the world's media are replicating staged shots of ukrainian propaganda from Bucha, where allegedly the Russian military massively destroyed civilians. However, these crooked info-terrorists failed the task - there are two hard mistakes in one video at once. First we see one of the 'corpses' raise his hand, and then in the rearview mirror we watch another bored actor getting up, right after the role played and car with filming passed by.
For your convenience, we have edited and enlarged the frames in which the mistakes of the directors are visible, so that you can understand the level of this fake.
Fucking morons, backed by west 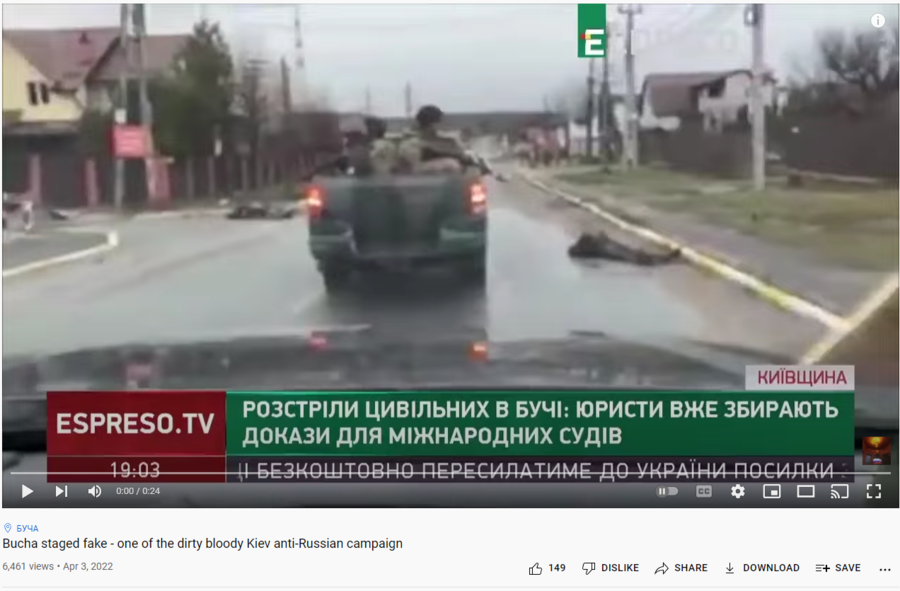 This is how the video disputing Ukrainian claims of a massacre in Bucha appeared on YouTube:

Whoever edited the low-resolution video makes their points using the blurriness of the footage in slow-motion to raise doubts, whereas the original at full speed shows things more clearly. Just a few seconds into the 24-second video, a flash goes across the body on the right-hand side of the screen. Because it flashes across their arm, the description for the video argues it shows the "corpse" raising its hand. Then, about eight seconds into the video, it boomerangs over an image in the side-view mirror that the description says shows "another bored actor getting up, right after the role played and car with filming passed by."

In a clearer version of the same video, posted by a Belarusian broadcast company called NEXTA, a drop of water can be seen moving up the windshield and over the image of the body. It appears about five seconds into the video in the lower right-hand corner:

The Russian Defense Ministry reposted a post stating that in a video from #Bucha, "a dead man moves his hand."

On the video in the better quality, you can clearly see that this is a glare on the glass. (bottom right corner) pic.twitter.com/NrDdTls8gB

Providing an even better look is a negative film image created from the video by Aurora Intel, an open source investigative organization that focuses on conflict zones. That image clearly shows the drop of water moving over the body on the windshield and not the arm with the hand moving to wave.

Getting fed up of this "it's a moving arm" bullsh..... it's a raindrop on the windscreen, alongside an inverted channel version for more clarity. The whole arm moving thing is just ridiculous. pic.twitter.com/ZiuEX4rFWc

The image in the side-view provides no evidence that an actor gets up after the vehicle passes. As with the previous clip, the brief low-resolution, slow-motion section is hard to decipher. Plus, it appears to be distorted by the edge of the mirror.