Was Dr. Deborah Birx, the White House coronavirus response coordinator under the administration of former President Donald Trump, executed at Naval Base Guam on July 6, 2021? No, that's not true: Lead Stories found no evidence supporting the claim. The claim was published by Real Raw News, an outlet known for releasing fictitious information.

The claim originated in an article (archived here) published on April 4, 2022, by Real Raw News and titled "Dr. Deborah Birx Was Executed Last July." It opened:

In May 2021 Real Raw News reported that Deep State Dr. Deborah Birx, a woman more famous for polychromatic scarves than medical expertise, was arrested on charges of treason and mass medical malpractice at her multigenerational home in Pennsylvania. We then reported that JAG had set aside time in June for her military tribunal. After [...]

In May 2021 Real Raw News reported that Deep State Dr. Deborah Birx, a woman more famous for polychromatic scarves than medical expertise, was arrested on charges of treason and mass medical malpractice at her multigenerational home in Pennsylvania. We then reported that JAG had set aside time in June for her military tribunal. After [...]

Lead Stories found no evidence that Birx was even arrested in 2021, let alone executed. While Lead Stories could not locate any photos or videos of Birx taken after her supposed execution -- most likely because at the end of 2020, she announced her retirement from government service -- she has stayed in the news. In October 2021, several media outlets reported that Birx was interviewed between October 12 and 13, 2021, in closed-door testimony used by the House Select Subcommittee on the Coronavirus Crisis. Birx was credited as the author of an opinion piece published in USA Today on December 1, 2021, about HIV/AIDS prevention efforts in the U.S. She also wrote a memoir about her time as the White House coronavirus response coordinator that is scheduled for release on April 26, 2022.

Additionally, the Real Raw News article making the claim contained an obvious sign of fabrication: the URL of the article said that Birx was executed in June 2021, while the article's headline and body claimed that she was executed in July 2021. A screenshot of the inconsistency is included below: 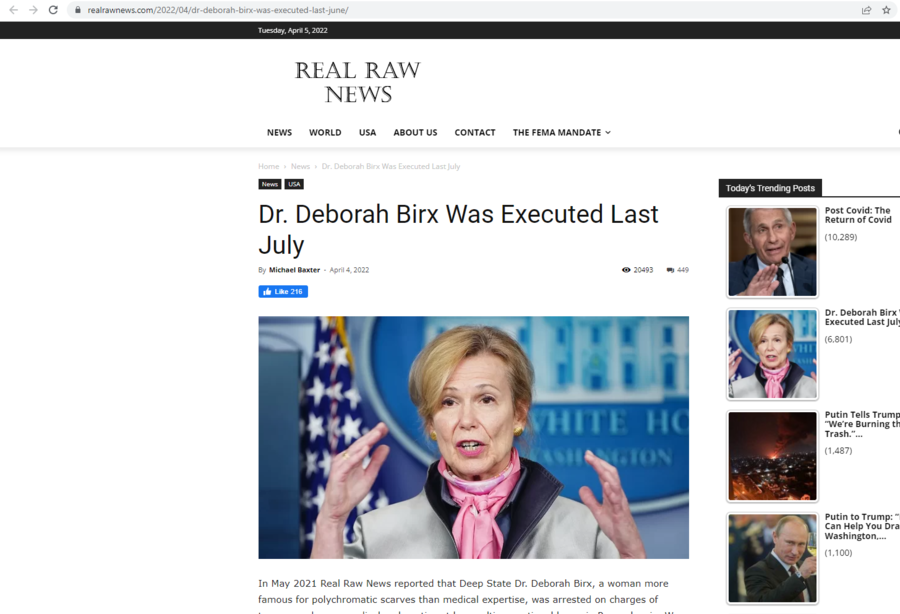 Lead Stories reached out to the George W. Bush Institute, where Birx is listed as a senior fellow at the time of writing, and Naval Base Guam for more information about the claim. We will update this fact check with any relevant responses.