Is former President Barack Obama a Muslim? No, that's not true: He has spoken frequently about being a Christian, not a Muslim. He gave speeches about his Christian faith before and during his eight-year presidency. The site that posted the image and claimed Obama's religion is Sunni Muslim usually shares memes, jokes and military-related posts.

I'm not a single issue voter, but Biden did something Republicans haven't been able to do. 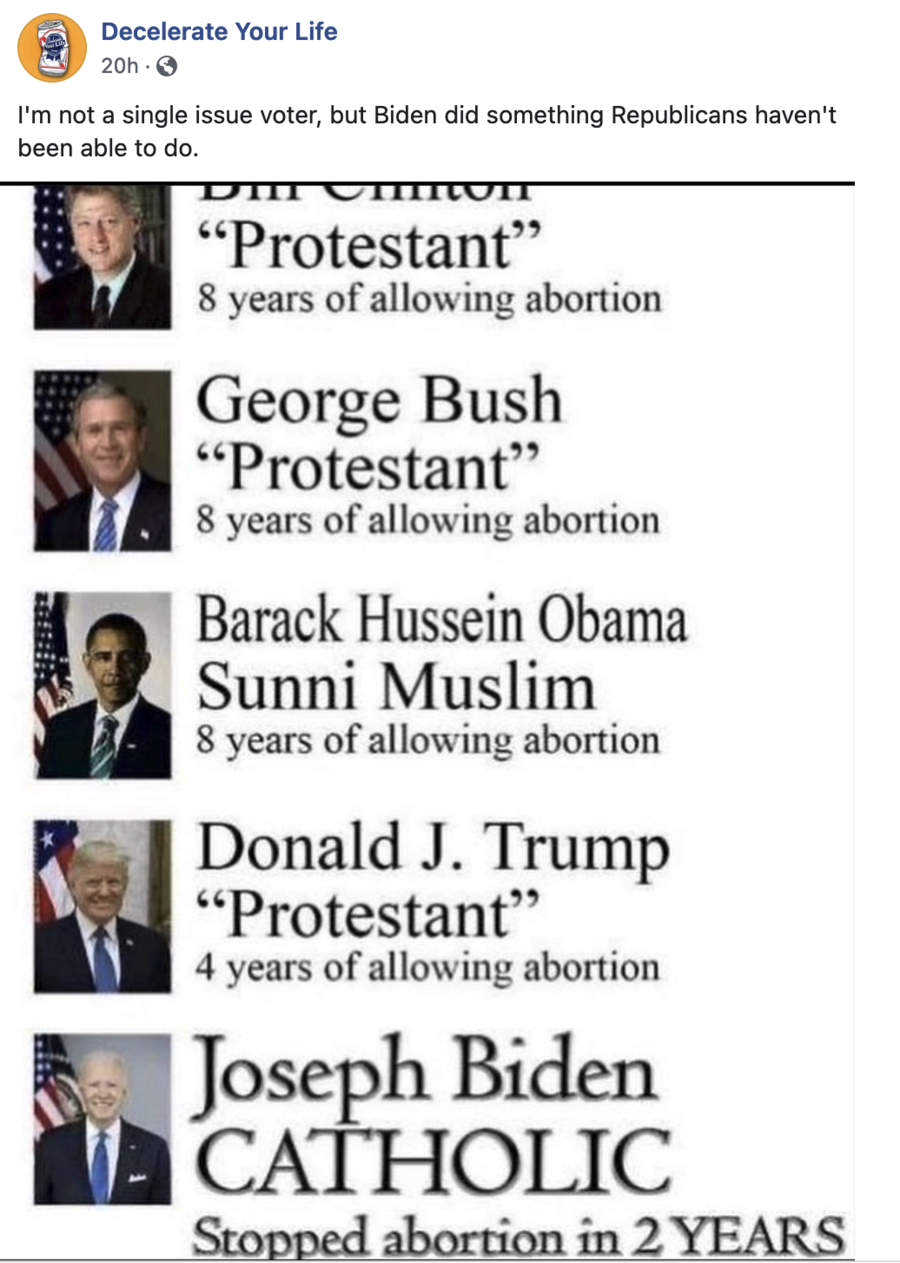 While the post's main focus appears to be the ongoing issue of abortion in the United States, this fact check will focus only on the false claim that Obama is a Muslim.

The image in the Facebook post lists former presidents Bill Clinton, George W. Bush, Obama and Donald Trump; and President Joe Biden. Accompanying the photos of Clinton, Bush and Trump is the word "Protestant," for Biden it's "Catholic," and for Obama, "Sunni Muslim."

In February 2009, then-President Obama spoke at the National Prayer Breakfast where he talked about becoming a Christian, according to the White House archive:

I was not raised in a particularly religious household. I had a father who was born a Muslim but became an atheist, grandparents who were non-practicing Methodists and Baptists, and a mother who was skeptical of organized religion, even as she was the kindest, most spiritual person I've ever known. She was the one who taught me as a child to love, and to understand, and to do unto others as I would want done.
I didn't become a Christian until many years later, when I moved to the South Side of Chicago after college. It happened not because of indoctrination or a sudden revelation, but because I spent month after month working with church folks who simply wanted to help neighbors who were down on their luck - no matter what they looked like, or where they came from, or who they prayed to. It was on those streets, in those neighborhoods, that I first heard God's spirit beckon me. It was there that I felt called to a higher purpose - His purpose.

The New York Times published an article in 2007 titled, "A Candidate, His Minister and the Search for Faith," noting that Obama was baptized at the Trinity United Church of Christ in 1988 and giving a detailed history of his religious history.

Christianity Today published an interview with Obama in 2008 in which he spoke about being a Christian and said, "I believe in the redemptive death and resurrection of Jesus Christ."

Although the post with the false claim about Obama appeared on a site that shares humorous memes and jokes, it also appeared on social media pages with religious and political themes