Did a NATO Patriot missile attack hit Russian troops near the Ukraine border? No, that's not true: A NATO official confirmed there was not any kind of NATO attack on Russian troops in late April 2022. The Patriot is used by more than 17 nations as part of defensive -- not offensive -- military measures. It is the U.S. Army's primary air and missile defense system that identifies and attacks incoming missiles and other threats.

It shows a video of NATO troops, but the more than eight-minute-long video doesn't show any attack of any kind. 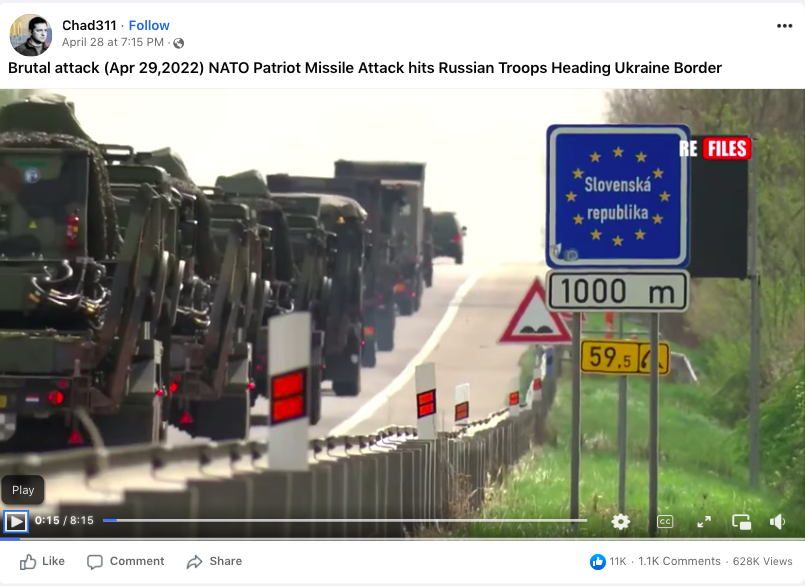 In an email to Lead Stories on May 4, 2022, a NATO official (who asked to be identified only by that title) wrote:

Any claim that NATO forces in late April fired on Russian troops is totally false and untrue.

The email provided further information on NATO troops in the region:

In response to Russia's invasion of Ukraine, NATO significantly strengthened its defences in the eastern part of the Alliance. We have activated our defence plans and deployed thousands of extra troops from both sides of the Atlantic. These deployments include several Patriot air defence systems. We are also setting up four new multi-national battlegroups - in Slovakia, Hungary, Bulgaria and Romania - effectively doubling NATO's presence in the region. This is all backed by major air and naval power.

Further information on NATO's military presence can be found here.

The MIM-104 Patriot is produced by Raytheon in Massachusetts and Lockheed Martin in Florida.

According to the website Missile Threat, a product of the Missile Defense Project at the Center for Strategic and International Studies (CSIS):

Other fact checks related to the 2022 Russia-Ukraine conflict can be found here.