Was the "Ghost of Kyiv" identified after dying in battle? No, that's not true: The Ghost of Kyiv is not a real person. The mythical aviator "embodies the collective spirit of" Ukrainian pilots, according to the Twitter account of the Ukrainian air force. The Ghost of Kyiv has been both a rallying point and a source of pride for the nation following the 2022 Russian invasion of Ukraine. It's also been part of a running gag.

The claim appeared in a Facebook post on May 1, 2022, under the title "His death led to his identity being revealed.😯." It opens: 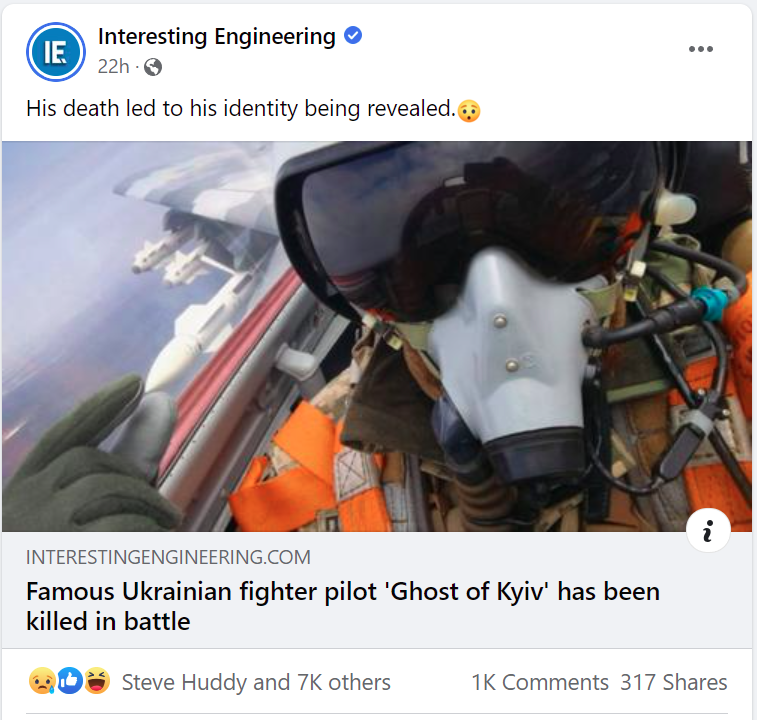 The legend of the 'Ghost'

Stories about the great aerial feats of the Ghost of Kyiv first surfaced in late February 2022, as Russia began its invasion of Ukraine. Some stories had him shooting down 40 Russian planes. Lead Stories has debunked multiple claims about the mythical pilot. Early reports identified him as Samuyil Hyde, a play on the long-running gag of putting comedian Sam Hyde at the center of various violent events.

Then on April 30, 2022, The Times of London identified the Ghost of Kyiv as Maj. Stepan Tarabalka, who it reported was shot down in March 2022. Tarabalka was a Ukrainian fighter pilot who died in battle, but the Ukrainian air force tweeted he was not the "Ghost." It added the mythical aviator "embodies the collective spirit of" Ukrainian pilots. This is the post by the Ukrainian Air Force: 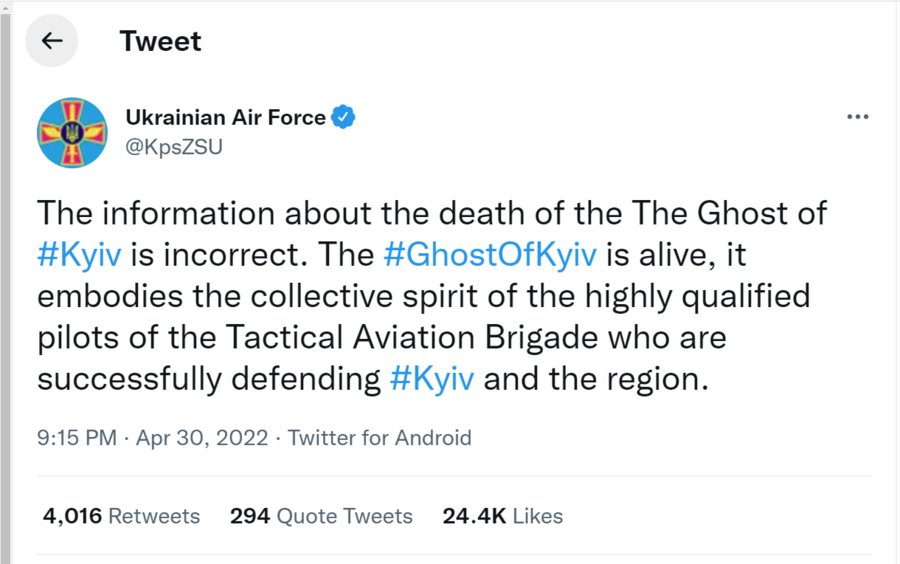 On Facebook, the Ukrainian air force called the Ghost of Kyiv a "superhero-legend":

❗️ Hero of Ukraine Stepan Tarabalka is NOT "Ghost of Kiev" and he did NOT hit 40 planes.
On March 13, 2022, Major Stepan Tarabalka was heroically killed in an air battle with the dominant forces of the Russian occupiers. Here is the information about him on our official website: https://www.facebook.com/kpszsu/posts/339462291555059
Ghost of Kiev is a superhero-legend whose character was created by Ukrainians! This is a faster collected image of pilots of the 40th Air Force tactical aviation brigade, who protect the sky of the capital. What suddenly appear where they are not expected!

This is what the Ukrainian military's profile from March 23, 2022, said about Tarabalka:

🕯️ HEROES DON'T DIE - HEROES AMONG US!..
Stepan Tarabalka is one of those romantikív who from childhood dream of becoming a military lʹotčikom. And he was confidently walking towards his dream. At the age of 13, Stepan entered the Carpathian Military Sports Lyceum, and later joined the flying military college - Kharkiv National University of the Air Force. And. Every oak that successfully completed in 2014.
This is an officer of the new generation of the Ukrainian army who began his officer career at the same time when the war came to Ukraine. Protecting his country was a conscious choice for him.
Everyone who knew Stepan Tarabalka personally says that he is a real officer and professional in his field. On people like him level subordinates, and senior commanders are sure that everything in the units will be under control.
On March 13, 2022, Major Stepan Tarabalka was killed in an air combat with the dominant forces of Russian occupiers.
The President of Ukraine prisvo Преv lʹotčiku title " Hero of Ukraine " with the udostoênnâm of the Order " Gold Star " posthumously.
Hero of Ukraine Stepan Tarabalka will always live in our hearts!
Glory to the Hero!
#stoprussia
We continue the fight against the occupier!
Повітряне командування "Захід" Повітряних Сил ЗС України