Is this a real photo of a town on Mississippi Highway 14, either past or present, that has a road sign that warns, "Whites Only Within City Limits After Dark"? No, that's not true: This photo is a still frame from the 2018 movie "Green Book," which was set in the early 1960s, and this is not Mississippi, it is Amite City, Louisiana. The movie was filmed almost entirely in Louisiana except for a small portion shot in New York.

"Sundown Towns" and signs like the one in the photo were real, but this picture shows a movie set. Sundown towns may exist informally without the signs in the present day.

PSA: Please be aware of the Sundown Towns in your state. If your wondering what a Sundown Town is; let me enlighten you. A Sundown Town is a town where black people or people of color are not allowed to be in after the sunsets. These are towns are reserved for white people only. If you are found in these towns after sunset the consequences are indefinite incarceration, torture or death. Sirens on windmills sound off at 6pm (typical time the sunsets) to alert people if you're not white to leave the town. You will find signs plastered throughout business to often say "ANNA" (Ain't No Niggers Allowed) or NAPA (No African People Allowed). I was in disbelief when I saw this because they can't possibly still exist, but my own state of North Carolina still have towns following these rules. Please check the link below and select your state so that you will know what towns your not allowed in after sunset. Sad to say but it's so true.... Stay Woke. I don't say woke cause I never sleep on how my people are treated.
https://sundown.tougaloo.edu/content.php...
Source: Takara Jackson
Elevated FHz
#LLTJ #LLNN #elevatedfhz #deeplyunlocked #Godfidence #awareness 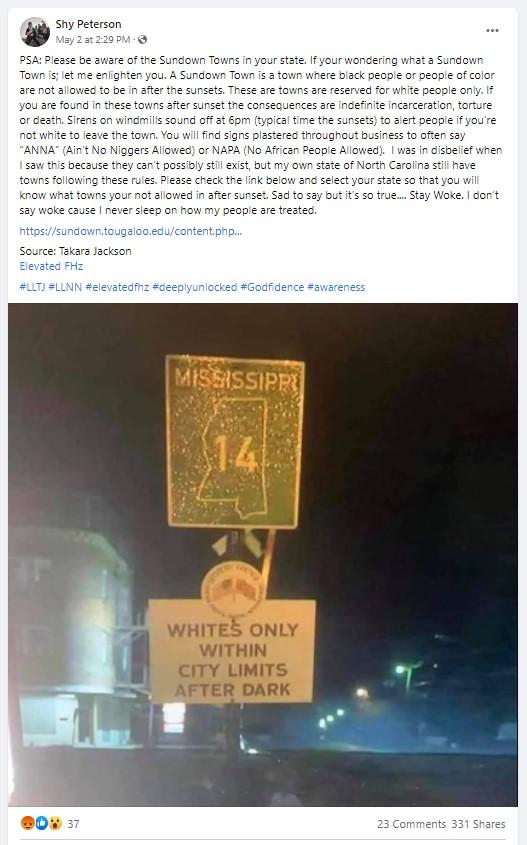 The embedded clip below begins with the scene where the pictured road signs appear in the "Green Book" movie:

An April 16, 2019, article in nola.com titled, "Where was 'Green Book' filmed? A rundown of New Orleans shooting locations" explained that Louisiana had provided almost all the settings for a wide variety of scenes depicting places around the country:

'Green Book' is a road movie, and so, like most road movies, it's set in a variety of places, from New York City to Pennsylvania to Memphis to New Orleans. Surprisingly, though, the cast and crew of Peter Farrelly's Oscar hopeful didn't have to hit the road themselves while filming.

'All of it was shot in Louisiana, (except) for one day. We shot just a driving shot, the scene where Viggo (Mortensen) went into the car to get his wallet out,' Farrelly said in October at the New Orleans Film Festival, where his film earned the prestigious opening-night slot. They also used that day, in New York City, to collect only-in-NYC exterior shots.

Lead Stories was able to identify the railroad crossing in the photo on Instantstreetview.com. It was filmed at East Chestnut Street and South Central Avenue in Amite City, facing the Hotel Ponder with its distinctive rounded corner. Aside from the railroad crossing signs, and the intersection streets, the Google street view image from February 2022 only shows one other sign, an arrow sign pointing to U.S. Route 51. There is no sign that says, "Whites Only Within City Limits After Dark." 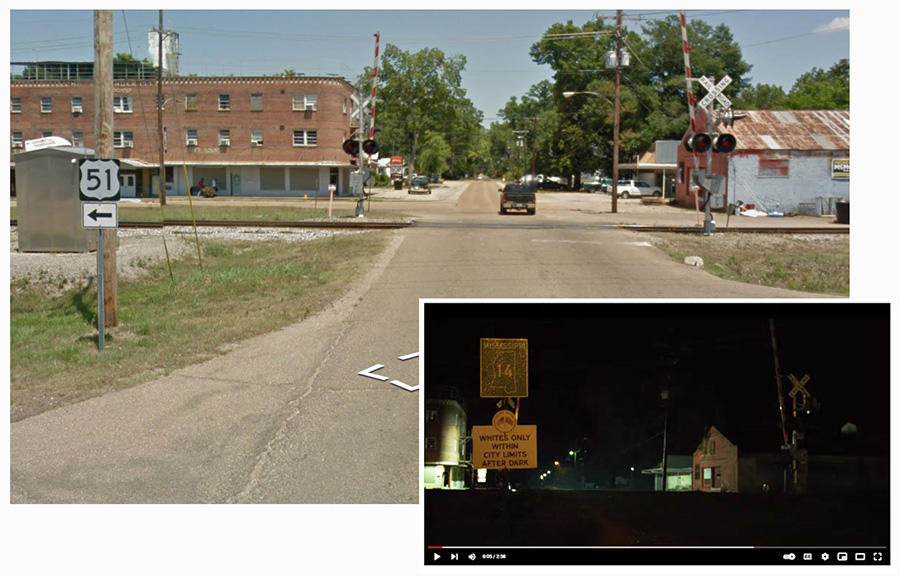