Did illustrator Lainey Molnar make a webcomic where the two panels compare "An Established And Complete Woman" with "A Victim Of Feminism"? No, that's not true: The original artwork has undergone several changes. Some changes were made by the artist. Other, trolling alterations were made by an unidentified person who also changed the intent of the original message with a different label on the second panel.

Molnar reposted a revised edition of her own earlier comic on Instagram on November 19, 2020. On May 5, 2022, a digitally vandalized version of the original comic, which had already circulated for some time on messageboards, was posted on Twitter (archived here) by @KevOnStage with the caption:

The caption text visible on the two panels of the comic reads:

An Established And Complete Woman

A Victim Of Feminism

This is how the tweet appeared at the time of writing. This is an altered version of the comic. Notable additions are a ball and chain of college debt, a sex toy, sexual conquest tally marks, a cat and a "We Can Do It" poster on the right panel and three more children on the left panel. The smile of the "victim of feminism" has literally been turned upside down into a frown with a digital cut and paste: 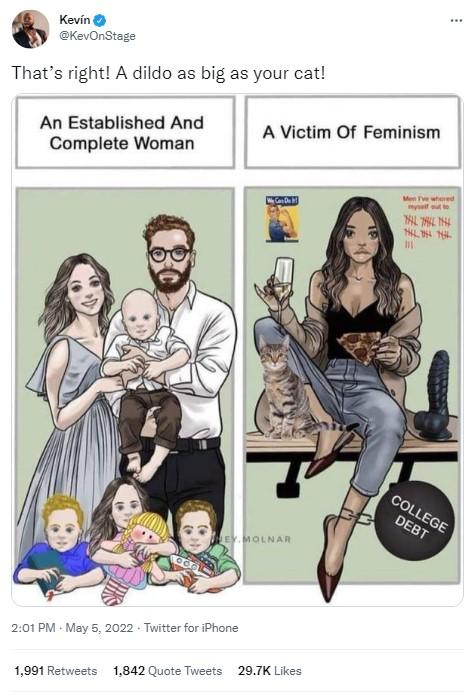 Lainey Molnar's comic artwork can be found in a November 19, 2020, Instagram post. The comic has the watermark "@LAINEY.MOLNAR." The two panels are captioned:

AN ESTABLISHED AND COMPLETE WOMAN

ALSO AN ESTABLISHED AND COMPLETE WOMAN 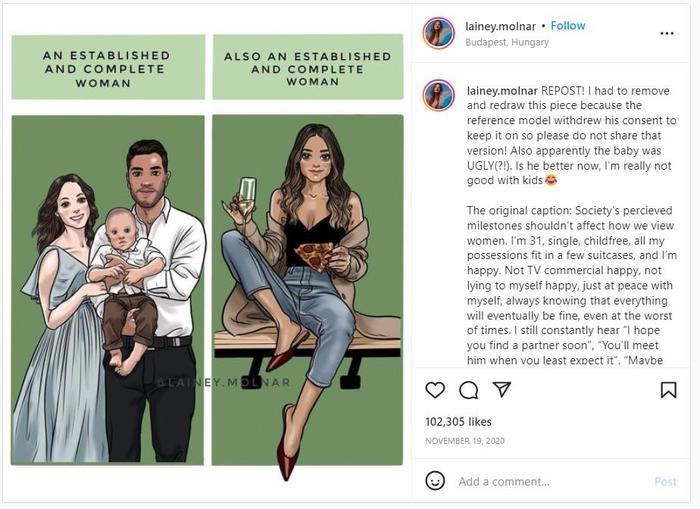 In her post Molnar explains that this is the second rendition of the cartoon she has published:

REPOST! I had to remove and redraw this piece because the reference model withdrew his consent to keep it on so please do not share that version! Also apparently the baby was UGLY(?!). Is he better now, I'm really not good with kids😂

The original caption: Society's percieved milestones shouldn't affect how we view women. I'm 31, single, childfree, all my possessions fit in a few suitcases, and I'm happy. Not TV commercial happy, not lying to myself happy, just at peace with myself, always knowing that everything will eventually be fine, even at the worst of times. I still constantly hear 'I hope you find a partner soon', 'You'll meet him when you least expect it', 'Maybe it's time to settle down'. Eh. We have the right to choose our lifestyle and not apologize for it, we have the right not to settle for less, we have the right to pick whatever makes us whole, being a white picket fence and three toddlers or backpacking around the world. Don't let anyone's rulebook or judgement define you. #YouDoYou

The crudely altered version of Molnar's comic has appeared in various iterations on message boards such as 4plebs, an archive of 4chan, and Reddit (here and here). The intent of the altered version is not exactly clear. False flag mocking memes are a common device on these message boards -- but the altered comic still bearing Molnar's watermark is causing confusion. Is it anti-feminist? Racist? Or is it a mocking parody of Quiverfull beliefs? Some people are questioning the change of complexion of the man appearing in the first panel and think that Molnar was also the person responsible for that -- she wasn't.

There is a backstory to this comic even before the trolling edit was done. The person whose likeness appears as the man in the original comic made two TikTok videos (here and here) where he explains his side of the story. He, @averie_wright, also posted this video on Twitter on May 5, 2022. In the videos, he shows his sister's photograph of him, which was used by Molnar for the reference picture. He criticized Molnar's very subtle revision of the male character after he and his sister objected, saying "she took off my glasses and gave me a haircut."

It was the original version of the cartoon, still with glasses, curly hair and a beard, that was subjected to the trolling edits, which included pinching the nose, and changing the man's hair color to auburn and skin color to white. Pictured below is a still frame from @averie_wright's video where he compares the original photo to the original comic and then the altered, hijacked version of the comic. 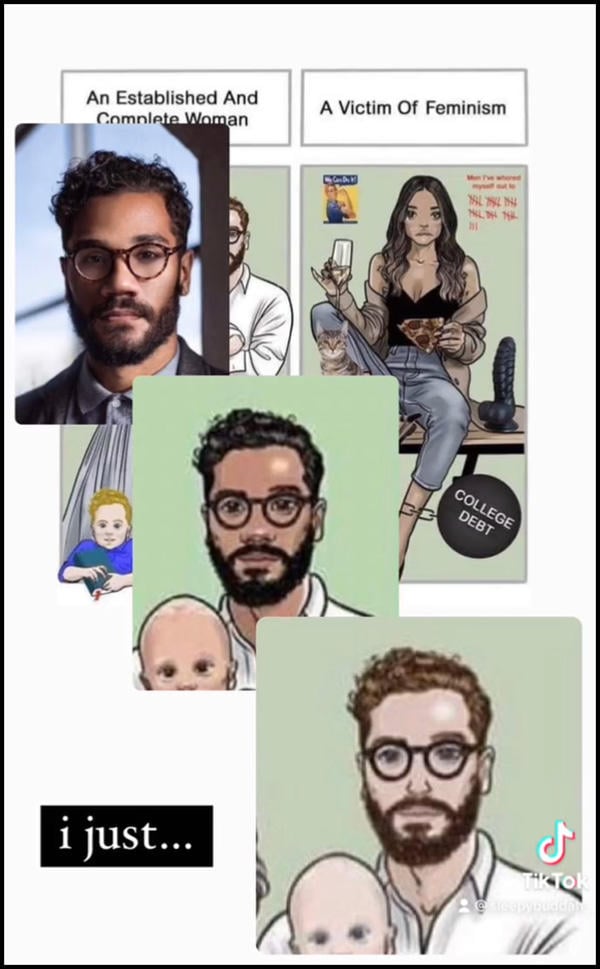