Did Pfizer CEO Albert Bourla say by 2023 that "we will reduce" the number of people in the world by 50%? No, that's not true: This is a doctored video and Bourla did not say that. The phrase clipped out of this video -- about reducing the number of people who can't afford medications -- changes Bourla's meaning. 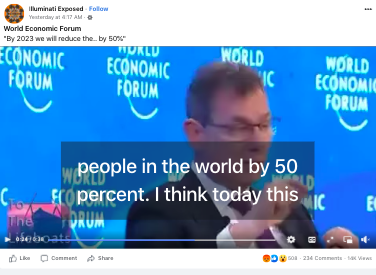 The original video can be found here on the World Economic Forum website. Its title is "Davos Annual Meeting 2022-Conversation with Albert Bourla, CEO of Pfizer -Original."

Posted on May 25, 2022, it's from the original live-streamed session. The words "in the world that cannot afford our medicines" have been cut out in the doctored video.

In the original video from 2:42 to 3:00 in the video Bourla actually says:

...the first week we met in January of 19 in California and to set up the goals the number of people in the world that cannot afford our medicines by 50%. I think today this dream is becoming a reality.