Did a retired nurse in hospice care just reveal that she had swapped 5,000 babies over over the course of her 44-year career working at many hospitals in the St. Louis, Missouri, area? No, that's not true: There is no evidence supporting this claim. There is however, a very similar story that circulated in 2019 regarding the purported "confession" from a dying nurse in Zambia. In that fake news story, the claim was that the dying nurse confessed to swapping close to 5,000 babies in a 12-year period. There was no evidence for that claim, either. In 2015, a real situation in St. Louis, Missouri, was reported in the news when a mother and daughter were reunited after 49 years. The situation caused many elderly women who had been told decades earlier that their baby had died to wonder if they had also been tricked by a baby-stealing scheme. The investigation into the matter found that the other babies had indeed died.

The original story about the purported confession of a dying Zambian nurse circulated in April of 2019, on clickbait websites and in Facebook posts. A new post with slightly different details was published on Facebook on May 26, 2022. The post does not provide a link to any supporting evidence, names of any St. Louis hospitals or the name of the nurse:

A retired nurse on hospice just revealed she swapped over 5000 babies during her 44 year career. She claimed to have worked at countless hospitals In and around the Saint Louis area 😳😳😳😳

The fake news story about the Zambian nurse's deathbed confession circulated originally in April of 2019, but was still circulating on Facebook as recently as April 20, 2022, as seen in this post below: 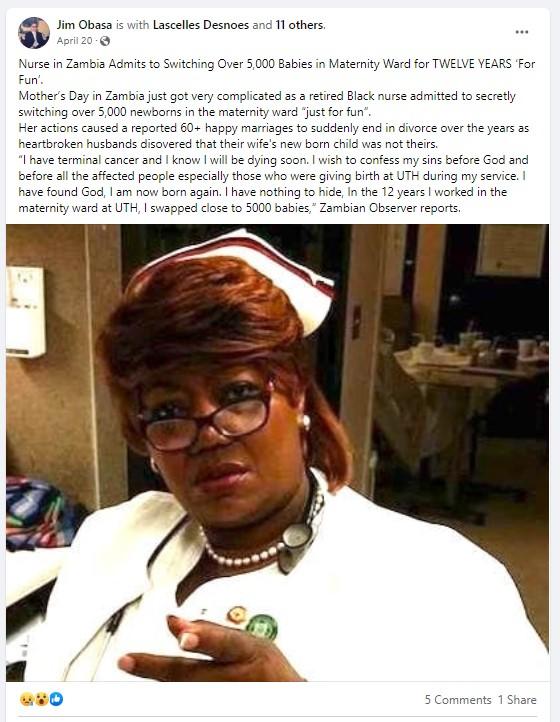 Lead Stories debunked the original fake news story about the Zambian nurse in April of 2019.

The Facebook profile that posted the new version of the story, which changed the location of the dying nurse to St. Louis, happens to be marked as residing in St. Louis.

The real-life situation in 2015 concerned a mother and daughter who were reunited 49 years after they were separated. The attention to the reunion story caused worry in many elderly Black mothers who had given birth at Homer G. Phillips Hospital in St. Louis decades earlier. They were told their baby had died and they were now concerned that they may have been the victim in a baby-stealing scheme. An August 14, 2015, follow-up article (archived here) on cbsnews.com titled, "U.S. attorney: Evidence disputes stolen baby claim" reported the findings of the investigation of U.S. Attorney Richard Callahan who said at a news conference:

We can now say with complete confidence that there is no truth to that allegation and our investigation is now closed.

Although the 2015 baby-stealing scare was a real news story in St. Louis, the concerns were found to be unwarranted.