Are students in Wilkes County, North Carolina, identifying themselves as cat or "furries" and asking for litter boxes in school classrooms? No, that's not true: The public information officer for Wilkes County Schools in North Carolina told Lead Stories they have received no such requests from students.

The claim appeared in a Facebook post by the page Wilkes Weather and Breaking News on May 17, 2022. It opens:

We are in trouble and it's worse than many are aware. 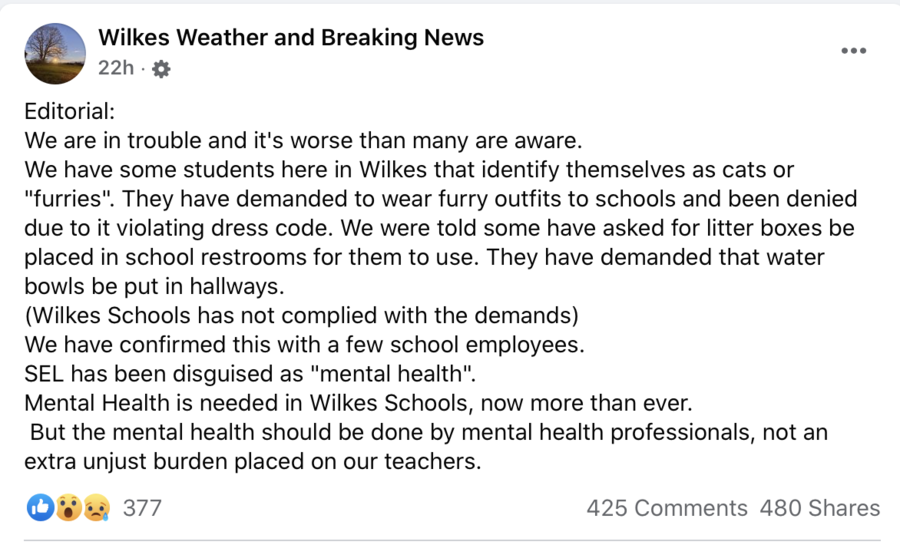 We have some students here in Wilkes that identify themselves as cats or "furries". They have demanded to wear furry outfits to schools and been denied due to it violating dress code. We were told some have asked for litter boxes be placed in school restrooms for them to use.

While the post does not identify the state, the "About" information for the page "Wilkes Weather and News" lists its location as North Wilkesboro, NC, and the page says, "Share weather events and breaking news for Wilkes County, NC."

Merriam-Webster dictionary defines "furries" used in this context as:

Morgan Mathis, the public information officer for Wilkes County Schools, denied the claims made in the social media post in an email to Lead Stories on May 18, 2022:

As a system, Wilkes County Schools is not aware of any of the requests mentioned in this post such as items in restrooms.

Lead Stories has published debunks of similar claims made elsewhere in the United States that students are dressing like "furries" and asking for litter boxes in the restrooms. One school district was accused of putting cat litter boxes in school bathrooms for students who identify as "furries," but the superintendent of Michigan's Midland Public Schools said the claim was false and just a viral rumor, as Lead Stories reported here.

A similar claim was made in Wisconsin, that a school put a "furry protocol" in place to normalize students who identify as and act like cats and dogs at school. Randy Guttenberg, the superintendent for the Waunakee Community School District in Wisconsin, told Lead Stories in April 2022 that the district "does not have protocols for Furries, nor do we allow disruptions in our school and classrooms."