The claim appeared in a video posted to Facebook May 14, 2022, by Mark Dice, an Internet personality who has published other satirical videos. The video featured Dice conducting man-on-the-street interviews about a supposed partnership between Planned Parenthood and Walmart. According to Dice, Walmart would be opening abortion clinics in their stores to make abortions more accessible. The caption of the video read:

Abortions on sale at Walmart?

At the time of writing, none of the news releases nor documents from Walmart's corporate website detail such an announcement. There were also no press or news releases found on Planned Parenthood's website that made the claim.

Dice acknowledged that the claim was false in the same video. At the 1:50-mark, one of his interviewees asserted that Walmart was not offering abortions. Dice confirmed the interviewee's suspicions:

You're right, they're not.

However, there were several comments under the video from users who appeared to take the claim seriously. Screenshots of such comments are included below: 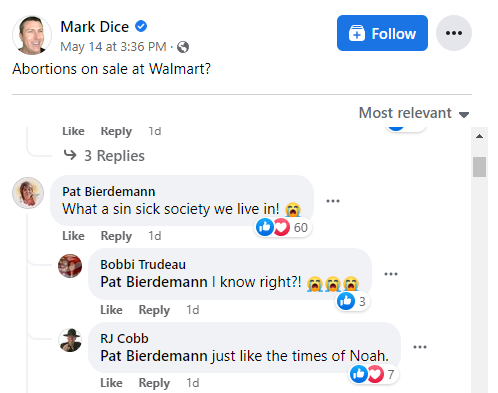 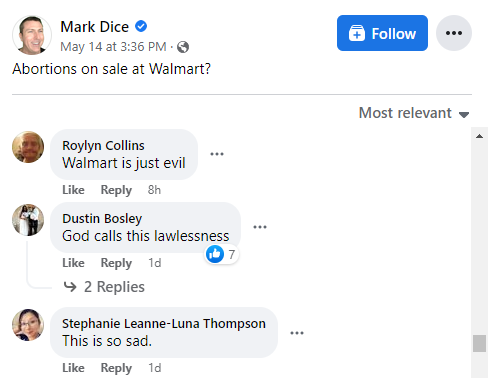 Of course we won't fact check every satirical story that crosses our desk. We will generally only do it if it seems there are enough people believing it is real. We often look at the comments and if there are several that appear to be coming from people taking the story at face value we may opt to fact check it.

Lead Stories reached out to Walmart about the claim. We will update the story with any relevant response.

Other Lead Stories fact checks related to abortion can be found here.