Was a Boeing 737 forced into an emergency landing on the beach after the pilot had a heart attack? No, that's not true: The footage is not real; it's gaming video footage created for entertainment. The video shows an animated airplane being shot at by animated police officers and then crashing on the beach of what appears to be Santa Monica beach in Los Angeles. There is no pilot shown in the video, much less one having a heart attack. Only one person from the plane jumps out at the end of the video and survives, using a parachute to land on the ground.

The claim appeared in a video on Facebook on March 4, 2022, under the title "Boeing 737 Forced To Emergency Land On Beach After Pilot Has Heart Attack." 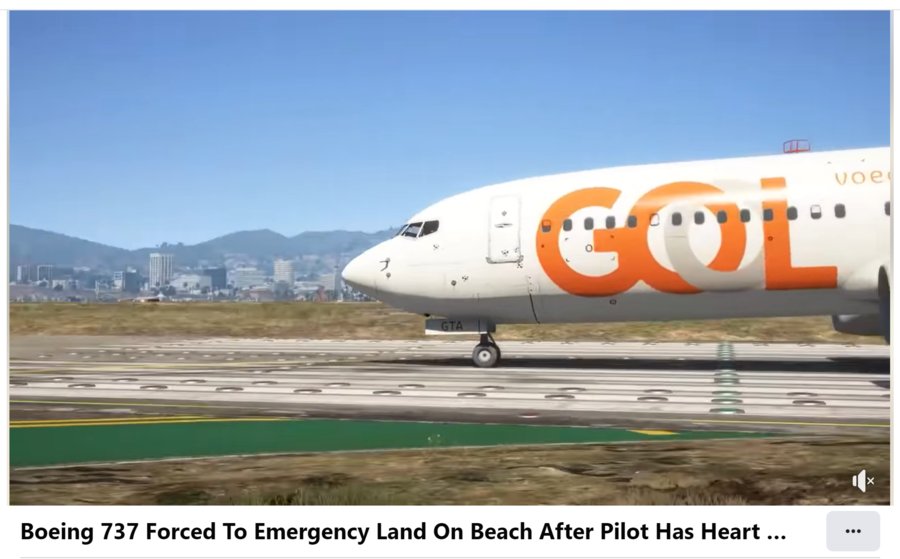 The Facebook page where the six-minute animated video was posted, F9, is described as Gaming Video Creator. The page includes other animated videos of surreal scenes, including one of Air Force One titled "Boeing VC-25 Air Force One Emergency Water Landing GTA 5," which is a reference to the video game Grand Theft Auto 5. The videos are not news stories or actual footage of plane crashes but are user-generated animated videos.

The video in the Facebook post shows a plane from a large Brazilian airline, Gol Linhas Aéreas Inteligentes S.A., on the ground at what appears to be an airport with police officers firing their guns at the plane as it takes off, only to crash land on the beach at 1:25 in the video.

At 1:34 in the video the plane is on the sand going forward and backing up, narrowly missing bikini-clad women on the beach, as a police car chases it back and forth. The plane then uses the sand as a runway and takes off again, flying up the coast. At 5:04, a person emerges through a hatch in the plane with a parachute on their back. The video ends with the plane crash-landing on the ground and the person surviving as a rainbow parachute opens and guides them to safety.

Airline pilots have become targets of COVID-19 vaccine conspiracy theories. Lead Stories has published debunks of similar claims regarding pilots who have died after receiving the vaccine here, here, here and here.