Have the DUI charges against Paul Pelosi, husband of House Speaker Nancy Pelosi, been dropped? No, that's not true: The Napa County district attorney's office was working on charges stemming from Paul Pelosi's DUI arrest in Napa County, California, according to a voicemail message by Assistant District Attorney Paul Gero taped on June 10, 2022. Larry Kamer, the spokesperson for Paul Pelosi, told Lead Stories in an email on June 8, 2022, that claims that the charges have been dropped were "untrue." Kamer confirmed that status on June 13, 2022.

The claim, which cited no sources, appeared in an Instagram post on June 7, 2022, with the title "BREAKING: All charges have reportedly been dropped against Paul Pelosi for his DUI crash." It continued:

Gavin Newsom reportedly intervened at the request of Nancy Pelosi and directly ordered the California Highway Patrol to drop all charges. 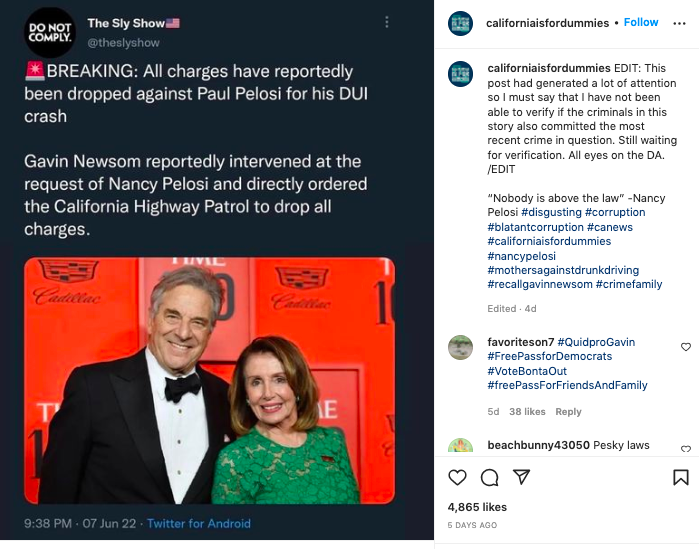 Larry Kamer of The Kamer Group Inc., a strategic communication consultancy, is Paul Pelosi's spokesperson. Lead Stories reached out to him twice about this claim.

He replied on June 8, 2022 to the question, "have all charges been dropped from Mr. Pelosi's DUI," with this email: "That's false."

Fran Clader, director of communications in the office of the commissioner for the California Highway Patrol (CHP), clarified via email on June 9, 2022, that the CHP does not file the actual charges:

The Napa County District Attorney's office is currently working on charges stemming from the DUI arrest in Napa County, California. The case is currently under review to decide what if any charges will be filed against Mr. Pelosi. This is a standard protocol for any DUI case that is referred by a law enforcement agency in Napa County. No decision has been made at this time. Any speculation to the contrary is incorrect. When a filing decision is made by the Napa County District Attorney, the media and public will be notified.

The claim also mentions California Gov. Gavin Newsom. Lead Stories reached out to Newsom's office, and spokesperson Erin Mellon responded by email on June 14, 2022, saying, "The Governor and the Governor's office have had no involvement in this incident."