Did President Joe Biden approve a "healthcare card" that provides free health, vision and dental benefits? No, that's not true: There's no such "healthcare card" approved by the president -- and the claim is an advertising ploy.

The claim appeared in a Facebook post published on May 23, 2022. It featured a picture of Biden with stacks of legislation and a picture of a UnitedHealthcare card, along with a link for users to message Affordable Health Savings, the page making the claim. The caption of the post read:

🚨 Biden approves new healthcare card that gives $𝟬 𝗵𝗲𝗮𝗹𝘁𝗵, 𝘃𝗶𝘀𝗶𝗼𝗻 & 𝗱𝗲𝗻𝘁𝗮𝗹 benefits to those 25 and older. Claim Before the Deadline 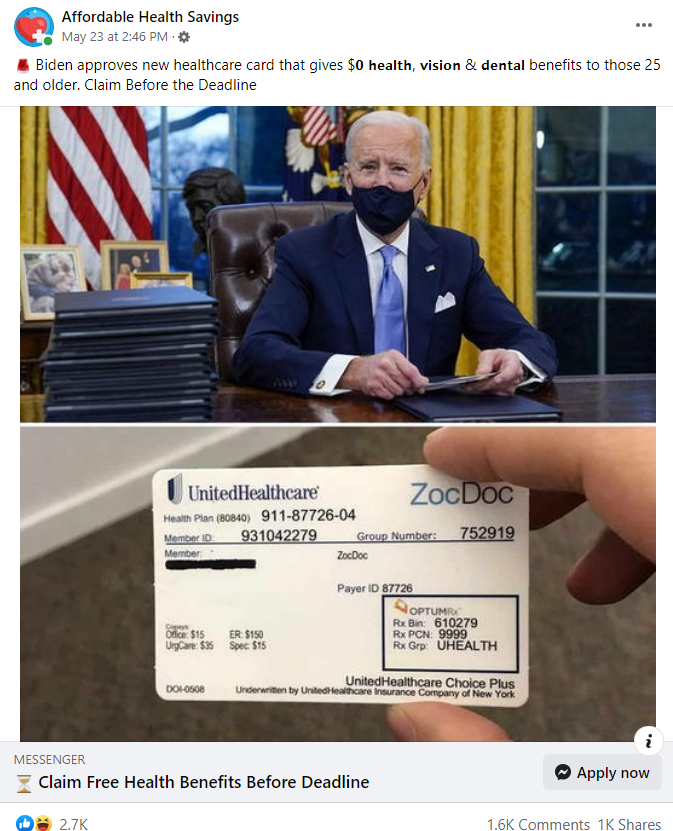 There is no Biden-approved "healthcare card" that provides free benefits to Americans. The Biden administration has only announced plans to provide health care within the Affordable Care Act (ACA). A fact sheet about the administration's health care efforts published on April 5, 2022, stated:

Thanks to the landmark American Rescue Plan, ACA premiums are at an all-time low, while enrollment is at an all-time high. Four out of five Americans can find quality coverage for under $10 a month, and families are saving an average of $2,400 on their annual premiums--$200 in savings every month back to families. The Administration has lowered costs and increased enrollment to a record high of 14.5 million Americans--including nearly 6 million who newly gained coverage. With the addition of Missouri and Oklahoma, two states that expanded Medicaid last year, nearly 19 million low-income Americans are enrolled in the ACA's Medicaid expansion coverage, adding up to a record nearly 80 million children, pregnant women, seniors, people with disabilities, and other low-income Americans covered by Medicaid.

None of these administrative actions are equivalent to "$0 health, vision & dental benefits to those 25 and older."

The meaning behind the UnitedHealthcare card picture included in the Facebook post was not made totally clear, although the implication is that it was the "healthcare card" that Biden supposedly approved. Lead Stories reached out to United Healthcare to check whether it's associated with a program like the one described in the post. We'll update this story with any response.

Welcome to the Health Enrollment Center! You may qualify for $0/Month Medical, Dental, Vision & more. Click Get Started to see if you qualify!

A screenshot of the chat box is below: 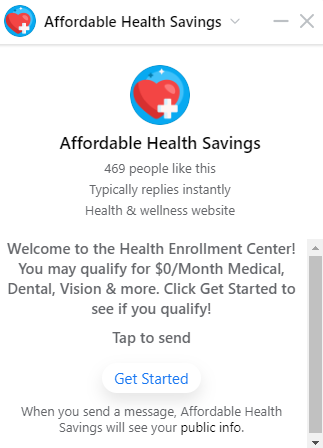 The website for Affordable Health Savings includes a statement on its homepage that reads:

Americans Making Less Than $50,000 Per Year Can Qualify For Free Health Insurance

A screenshot of the homepage is included below: 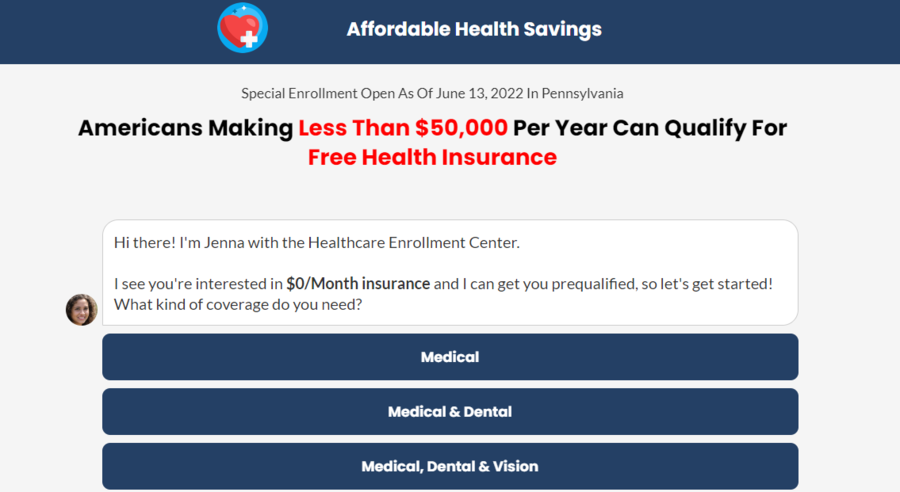 Disclaimer: This website is not affiliated with the Affordable Cares Act program or any other government entity. The information provided on this website is for informational purposes only. It is not intended to be, nor does it constitute any kind of financial advice. Please seek advice from a qualified professional prior to making any financial decisions based on the information provided. This website acts as an independent digital media & advertising publisher. This webpage is formatted as an advertorial. An advertorial is an advertisement that is written in an editorial news format. PLEASE BE AWARE THAT THIS IS AN ADVERTISEMENT AND NOT AN ACTUAL NEWS ARTICLE, BLOG, OR CONSUMER PROTECTION UPDATE.

A screenshot of the disclaimer is included below: 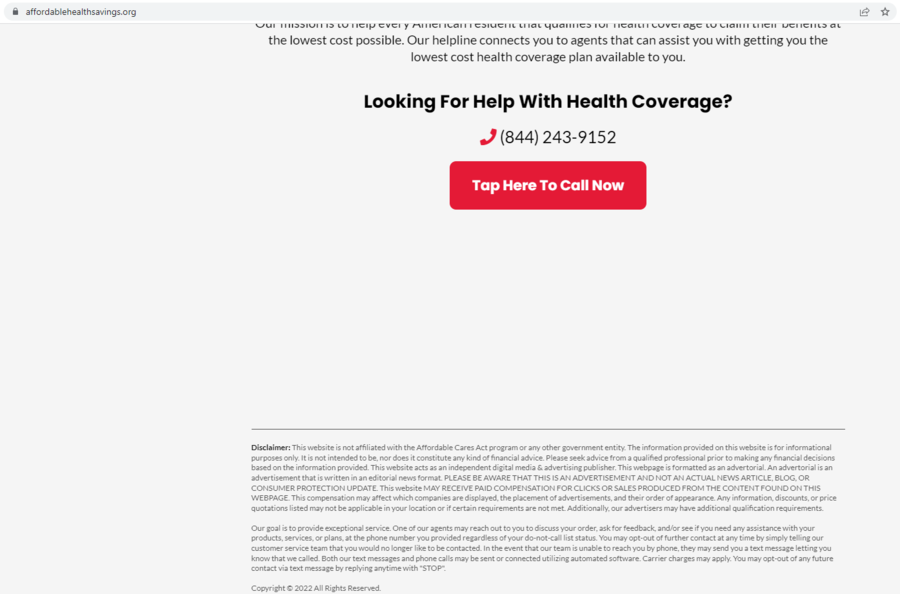 No more EXPENSIVE health bills anymore! Thanks to recent changes in 2022, adults who make less than $50k a year have access to FREE healthcare coverage. Speak to someone right now and receive your coverage immediately

However, the link in the post led to an advertorial by claimhealthcredits.com with a disclaimer that was close to that of the website discussed above. There was no evidence presented in this advertorial to support the advertorial's claim. 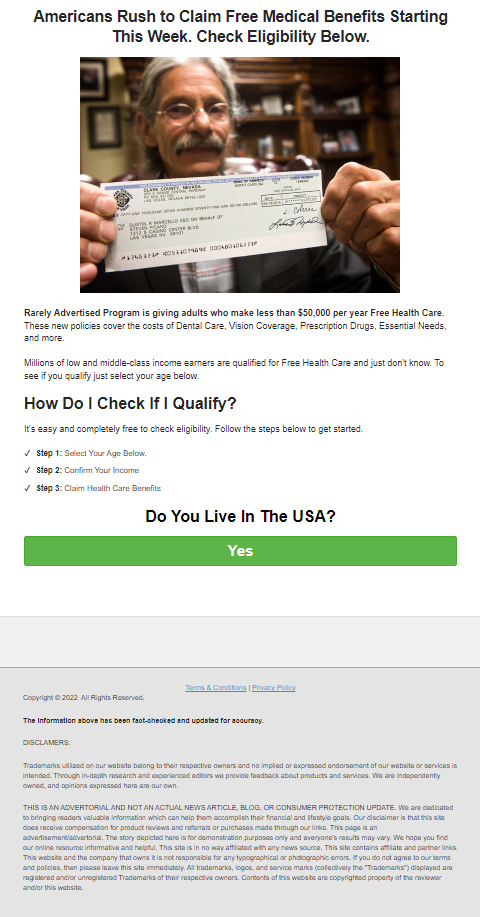 Another Facebook post published on August 5, 2022, made the claim that Congress approved "$0 Health Insurance" but, like the other posts mentioned in this fact check, did not provide any evidence for the claim.

Lead Stories has previously debunked various misleading or false advertisements, including one claiming that the government would erase debt for Americans with over $10,000 in debt and one falsely claiming that CNN ran a report about a program in which Americans could earn up to $50,000.