Are people who have five inches of fat on their body "bulletproof"? No, that's not true: Body fat may slow a bullet but it does not stop the projectile nor does it render a person "bulletproof."

The claim appears in a 13-second reel published on Facebook on May 13, 2022, without a caption. The transcription of the video is:

I just read an article that said five inches of fat can stop a bullet.
I'm not fat ... bitch, I'm bulletproof!

The statement made by the woman in the video is not a spontaneously unique idea. People have been sharing posts on Facebook with nearly identical phrasing as far back as 2021 (here and here). The Lead Stories composite image below shows a sampling of those posts. Lead Stories was not able to identify any one specific article that may have been the source of this trend.

A June 10, 2018, post on Facebook shared a meme attributed to blowingfacts.org, which estimated a much thicker bullet-stopping depth to the fat layer. It said:

If you had a 2-foot thick layer of fat on your body, it could stop a 9mm bullet from reaching your internal organs. 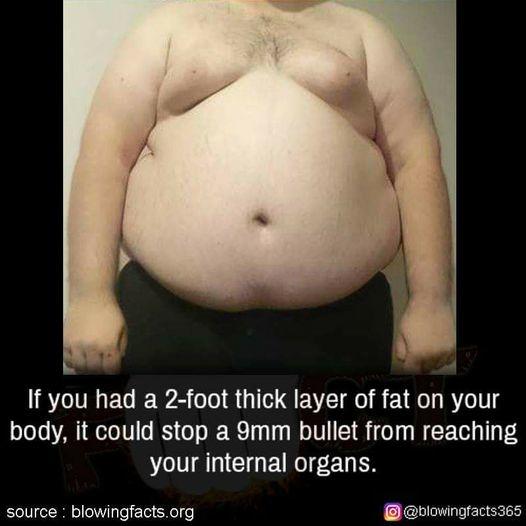 Ballistic gel is a uniform material that is used for testing firearms and bullets in such a way that the results can be compared to each other. On the website customcollagen.com, a distributor of a professional grade ballistic gelatin, the purpose and limitations of the material are described:

While ballistic gel is the closest artificial equivalent to human or animal flesh, it can't predict exactly how much damage a firearm can do. Ballistic gel is a fairly accurate representation of human and animal muscle and organ density, but it doesn't represent skin or bones. Therefore, the gelatin tears more easily than skin, causing a margin of error that you will always need to account for.

Additionally, no two target scenarios in real life are going to be exactly the same. This fact alone makes it impossible for ballistic gel, or any other test substance, to predict the performance of a bullet with 100% certainty.

On June 17, 2007, thenakedscientists.com published an article, "How fat would you have to be to stop a bullet?" The article includes the "Kitchen Science" experiment podcast interview with David Williamson at the Cavendish Laboratory at the University of Cambridge. The specific test conducted used a ball bearing fired with compressed gas from a barrel. The ball bearing easily passed through a 36-centimeter-long tube of ballistic gel (14.17 inches) and shattered the tube. They estimated that it would take twice that thickness of gel, a body about 2 meters wide (6½ feet) or "unfeasibly fat," to stop the bullet.

This question of human fat can be bulletproof was also tested by TV's "Mythbusters" in "Episode 112: Coffin Punch," which aired on November 5, 2008. The fan page mythbustersresults.com says the test in the bulletproof body fat segment was derived from the proportions of a man who was once recorded by Guinness Book of World Records as having the largest waist, 119 inches when he weighed 1,197 pounds:

Determining that the largest layer of fat around a human (Walter Hudson) would measure 16 inches, Adam and Jamie placed that amount of human-temperature cow fat in front of the dummy. The bullet made it all the way through the fat easily.