Is geotracking the only evidence being used by the Department of Justice (DOJ) to place January 6, 2021, defendants inside the U.S. Capitol? No, that's not true: FBI investigators and the DOJ are using the tracking data, along with Wi-Fi access points, Bluetooth beacons that interacted with phones and security cameras to confirm people were inside the building during the insurrection. 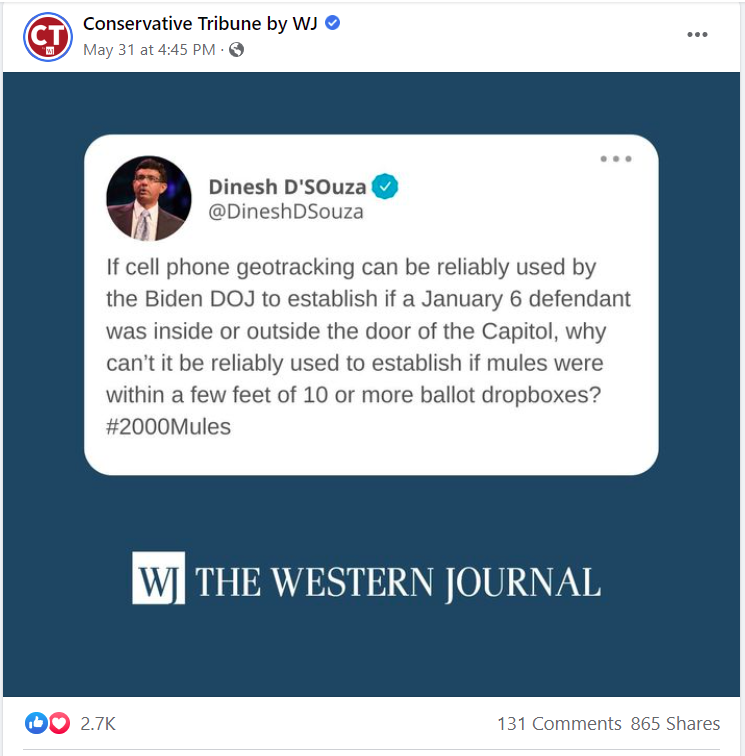 The Facebook post is a copy of a tweet by "2000 Mules" producer Dinesh D'Souza, who has had his use of geotracking in the movie questioned by journalists (here, here and here) and fact checkers, including Lead Stories. The original post appears below:

The producers of "2000 Mules" promote a theory that 2,000 people in five key swing states collected and delivered hundreds of thousands of absentee ballots on behalf of a "cartel" to throw the presidential election in favor of Joe Biden. Cellphone geotracking data and drop-box surveillance video were cited in the movie as evidence of paid illegal ballot harvesting, the practice of groups or organizations collecting and turning in individual voters' completed election ballots.

In his tweet, D'Souza is in effect asking the question: If it's OK for the Justice Department to use geotracking to prove its case, why isn't it OK for the producers of "2000 Mules"?

Neither the government nor anyone else can solely prove their cases with geotracking evidence. The findings in the film are based on the organization True The Vote's false assumptions -- that geotracking is extremely accurate and that driving by a ballot drop box means you actually stopped and deposited ballots in it. In reality, the GPS on a smartphone only gets you so close, according to the ItStillWorks website:

Accuracy to within 10 meters [32.8 feet] can be expected as long as the phone locks on to at least three satellites.

With fewer satellites, the information is less accurate.

Also, there's a big difference between placing someone inside a large building and putting them at a ballot box. The website of the Architect of the Capitol says the U.S. Capitol covers a ground area of 175,170 square feet or about 4 acres. Ballot boxes are much smaller. A dual ballot drop box made by Kingsley Library Returns and Equipment has a footprint of 20 square feet. More than 8,750 dual ballot drop boxes would fit within the footprint of the Capitol.

In the Justice Department's cases against Stephanie and Brandon Miller, the cellphone data was just a starting point, the Insider reported:

While investigating Stephanie and Brandon Miller, a married couple who prosecutors allege were at the Capitol, investigators obtained GPS and other cell phone records from Google via a search warrant.

Using this data, investigators were able to map out where specifically Brandon Miller was during the Capitol breach with an accuracy of 32 feet using knowledge from GPS data, nearby Wi-Fi access points, and Bluetooth beacons that interacted with the phone during the insurrection.

Security camera footage provided by U.S. Capitol Police also showed the couple inside the building. There were also Facebook photos showing them in the Capitol.

This map of the Capitol shows where Brandon Miller's phone was on January 6, 2021, based on subpoenaed cellphone data: 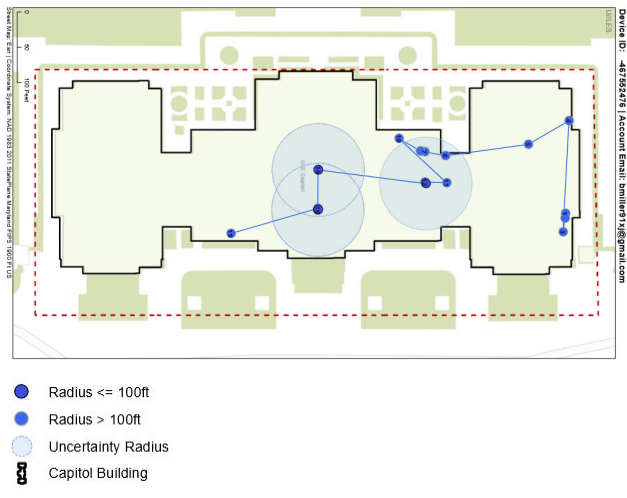 After plea agreements, both Millers were sentenced in March 2021 to a few weeks of incarceration, 60 hours of community service and $500 in restitution.

Jared Adams was another case where the Justice Department used geotracking to pin down a person's whereabouts in the Capitol, using subpoenaed data. But as Forbes reported, the evidence isn't solely based on cellphone information:

The government filing also noted that Google's location data isn't perfect. Using information from GPS, Wi-Fi and Bluetooth beacons, Google can pinpoint a location that's accurate to within 10 meters. That's why Google provides a 'maps display radius' for a location, rather than specific coordinates.

The Google data indicated the device linked to Adams' email address was within or around the grounds of the Capitol for nearly two hours on January 6, according to investigators.

As well as the Instagram and Google evidence, security footage captured an individual inside the Capitol whose face matched that on Adams' Ohio driving license, police believe.

This Capitol map shows where geotracking placed Adams. It was well within the confines of the building's footprint: 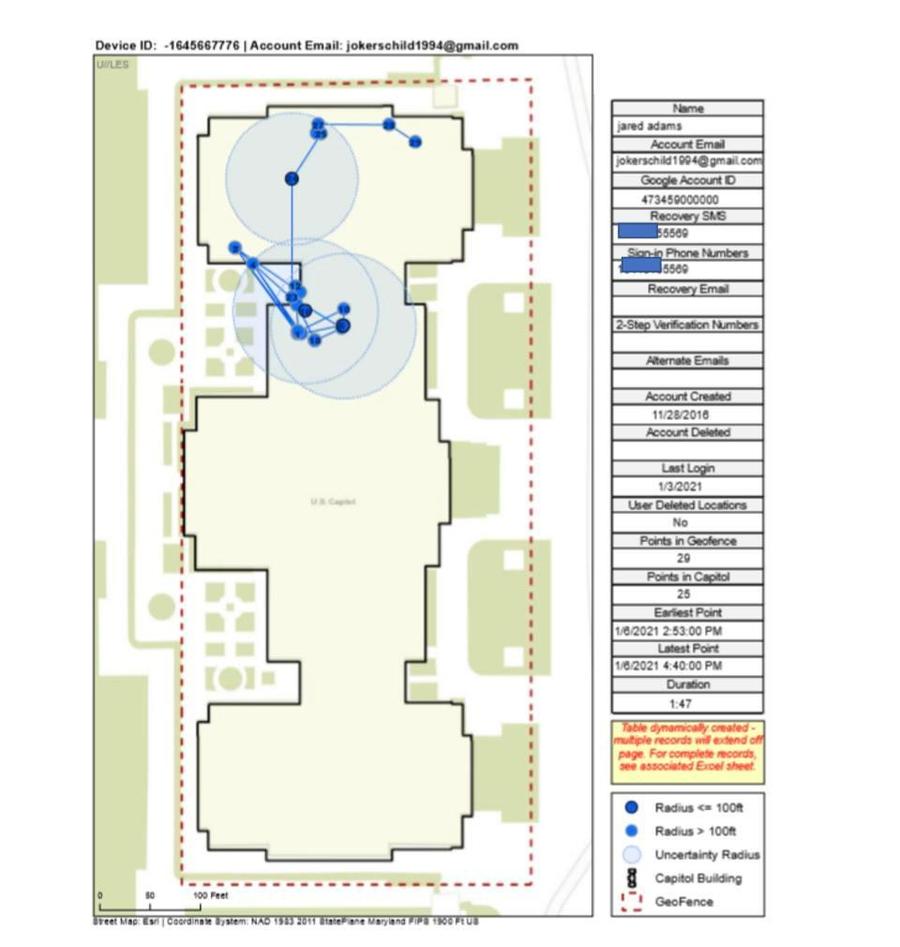 On May 4, 2021, Adams pleaded not guilty to all counts against him and remained on a personal recognizance bond at the time of writing.

The evidence in "2000 Mules" is less specific and less detailed. To make the cut as a "mule" who was involved in purported illegal ballot harvesting, a person's cellphone had to have been reported at 10 or more ballot drop boxes and also have made five or more visits to one of the one or more of the unnamed nonprofit organizations the producers said were involved in the scheme. True The Vote said the cellphone data it purchased covered the period from October 1, 2020, through Election Day on November 3, 2020. The geotracking in Georgia ran through the Senate runoff election on January 5, 2021.

True The Vote purchased anonymized data that doesn't directly link cellphone information to the phone's owner. To do that would require a warrant, something the organization wouldn't have access to.

The movie doesn't explain how the people analyzing the cell data determined whether the people associated with the cellphone signals actually stopped at the ballot drop boxes and nonprofits or just happened to be driving by on the way to work or somewhere else.

If the producers of "2000 Mules" could link their cell data to images of people at multiple drop boxes, they might be able to prove their theory, but they can't. True The Vote claims to have 4 million minutes (67,000 hours) of ballot drop box surveillance video that proves its claims of ballot harvesting. While the movie shows clips of people it identifies as mules, including two people it says went to multiple drop boxes in Georgia, True The Vote provided no additional data or video evidence that links them to any other locations.

In another blow to its case, True The Vote provided its geotracking information to the Georgia Bureau of Investigation, which found it legally lacking. GBI Director D. Victor Reynolds sent a September 30, 2021, letter to the organization and David Shafer, the chairman of the Georgia Republican Party. The text was provided to Lead Stories by the Georgia Secretary of State's office in early May:

Of those datapoints, the spreadsheets identify 279 cellphones which had made multiple trips to within 100 feet of a voter drop box. Other spreadsheets and documents provided tie these cell phones through geolocation to various organizations.

What has not been provided is any other kind of evidence that ties these cell phones to ballot harvesting; for example, there are no statements of witnesses and no names of any potential defendants to interview. Saliently, it has been stated that there is 'a source' that can validate ballot harvesting. Despite repeated requests that source has not been provided to either the GBI or to the FBI.

As it exists, the data, while curious, does not rise to the level of probable cause that a crime has been committed. For the GBI to get the same CSLI [cell site location information] information you provided, we would need to obtain a search warrant based on such probable cause. We cannot make that showing with what has been provided.