Was the school resource officer assigned to Marjory Stoneman Douglas High School in Parkland, Florida, "literally stealing hundreds of dollars from the backpacks of students" just before the 2018 shooting? No, that's not true: The Instagram post refers to a deposition without offering details of when or where or why that deposition was taken.

The deposition was taken for a lawsuit filed in 2018 by several students at Marjory Stoneman Douglas High School. The lawsuit claimed the school officer on duty the day of the shooting -- Scot Peterson -- "took two-hundred dollars ($200)" from a student's backpack and accused him of selling drugs several hours before the February 14, 2018, shooting. The lawsuit claimed the officer "eventually returned the money" to the student referred to as "T.M." in the lawsuit, "apparently realizing that he had seized T.M.'s money unlawfully." That encounter, according to the lawsuit, occurred on February 14, 2018 -- the same day the school subsequently was attacked by a shooter, with 14 children and three teachers killed. The lawsuit was dismissed in 2019.

BREAKING: A new deposition states that right before the Parkland school shooting began, the cop assigned to the school was literally stealing hundreds of dollars from the backpacks of students. When the shooting began, he then hid for 48 minutes. 17 people were slaughtered. 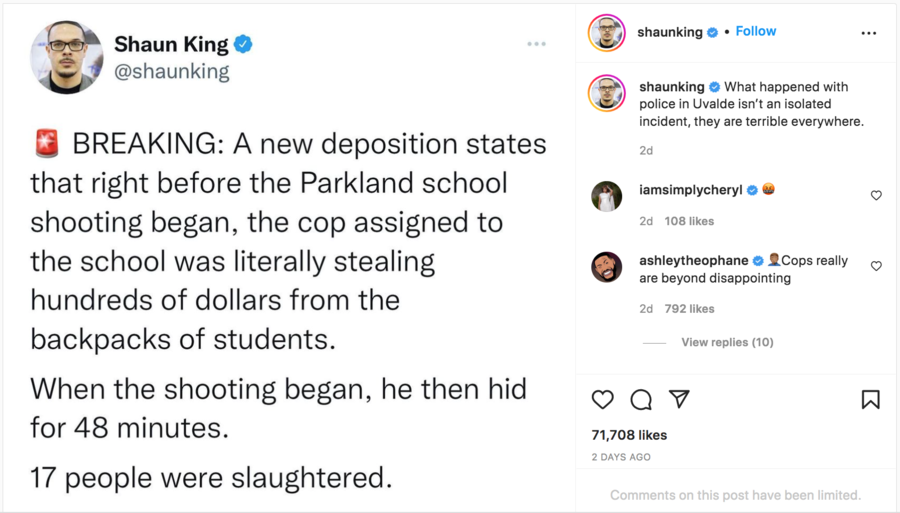 The post cited a "new deposition." Information regarding the 2018 lawsuit was reported by slate.com on June 7, 2022, the same day the Instagram message was posted, in an article titled, "School Police Don't Stop Shootings, so What Are They For?" The slate.com article noted the lawsuit was subsequently dismissed.

The description of the money being taken and then returned to the student was described on pages 8 and 9 of the 30-page lawsuit. Page 8 of the lawsuit claims that T.M. was taken out of class, detained and had his backpack searched, all while being denied contact with an attorney. It states:

T.M. was then detained by Defendant Peterson who took two-hundred dollars ($200) from T.M.'s backpack and conducted a custodial interrogation for approximately one hour.

Page 8 of the lawsuit also notes:

Defendant Peterson did not return the money to T.M. but instead put it in an envelope that he said may only be picked up by T.M.'s mother ...

Lead Stories viewed the deposition of the student referred to as "T.M." in July 2019. He was asked when Peterson gave the money back to him:

A By that time, he had given me the money back because he had been on the phone with my mom, gone through the whole you have to come, I'm not coming and my mom kind of was sticking up for me obviously, as a mom would, so he was like I'll just give you the money back. I can't keep your money, so -
Q So the money, the furthest away that it ever got from you was Scot Peterson's desk, right?
A Yeah. He put it in an envelope at one point, but it was on his desk after.

In October 2019 the portion of the lawsuit filed on behalf of T.M. was dismissed by U.S. District Judge Beth Bloom against Peterson.

The judge's decision is on Page 12:

Accordingly, Peterson's retention of T.M.'s money until T.M. left his office, similar to Peterson's continued detention of T.M. in the office after his conversation with T.M.'s mother, did not violate T.M.'s Fourth Amendment rights.

Accordingly, Plaintiff has failed to establish that there is law clearly establishing that Peterson's continued detention of T.M. or T.M.'s money after speaking with T.M.'s mother violated T.M.'s Fourth Amendment rights. Peterson is therefore entitled to qualified immunity on T.M.'s claims.

Lead Stories' research did not turn up any other public claims of alleged theft by Peterson.