Did a retired FBI agent provide evidence that the United Nations and U.S. Congress is conducting genocide against the people of the world, the United States and even their own families by dumping poison chemicals on them from airplanes? No, that's not true: Ted Gunderson makes some unsubstantiated claims and provides no evidence to support them. Expert consensus is that there is no evidence of the existence of chemical trails being used in a secret large-scale atmospheric program.

On January 12, 2011, Gunderson spoke on camera about what he called "death dumps," or chemical trails. His video was the first to be posted to the YouTube channel aircraporg on January 13, 2011. The video was reposted on the TikTok channel @doggiedude333 on May 1, 2022, and then published on Facebook on May 20, 2022. It was posted without a caption, but the video was covered with layers of text from TikTok captions. That text reads:

Please take a moment to watch this. This is former FBI TED GUNDERSON
A few months ago I would have thought this was crazy talk, but after what I've seen and the fact that the planes are here, in Nebraska, I wouldn't be surprised if it's true.
I may be a spiritualist, but I'm also a realist.
#chemtrails #tedgunderson #chemtrailpilot #geoengineering #weathermodificat...See more 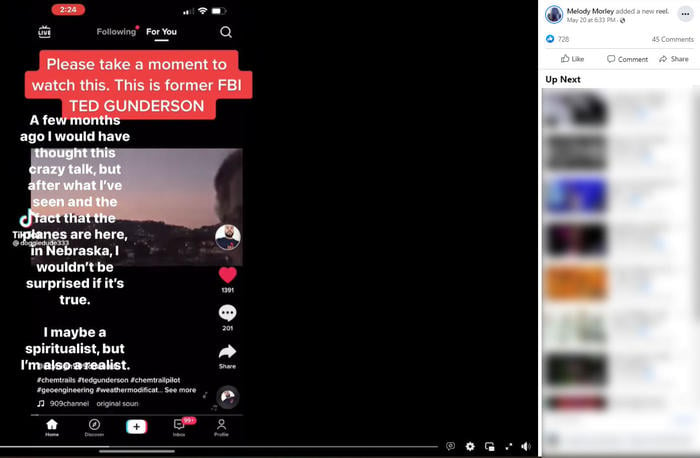 Gunderson's original two-minute 16-second video is cut off in the shortened copies. The transcript appears in full below with brackets indicating where the shortened one-minute clip begins and ends. The shortened TikTok version begins with robo-voiceover reading the caption, "Please take a moment to watch this This former FBI Ted Gunderson":

The death dumps, [otherwise known as chemical trails, are being dropped and sprayed throughout the United States, in England, Scotland, Ireland, Northern Europe, and I have personally seen them not only in the United States but in Mexico and Canada.
Birds are dying around the world, fish are dying by the hundreds of thousands around the world. This is genocide. This is poison. This is murder by the United Nations. This element within our society that's doing this must be stopped.
I happen to know of two of the locations where the airplanes are that dump this crap on us. Four of the planes are out of the Air National Guard Lincoln, Nebraska and the other planes are out of Fort] Sill Oklahoma. I personally have observed the planes that were standing still in Nebraska, in Lincoln, Nebraska at the Air National Guard. They have no markings on them, they're huge bomber-like airplanes with no markings. This is a crime against humanity, crime against America. Crime against the citizens of this great country. They must be stopped. What is wrong with Congress? This has an effect on their population and their people and their friends and their relatives and themselves. What's wrong with them? What's wrong with the pilots who are flying these airplanes? They're dumping this crap, this poison, on their own families. Somebody has to do something about it. Somebody in Congress has to step forward and stop it now. Thank you, I'm Ted Gunderson.

At the start of the video, a caption in red letters says, "'Death Dumps' over LA 1/12/11." The camera zooms to focus on some ordinary contrails visible over the hill, illuminated pink in the evening light. A contrail, or condensation trail, is a trail of water vapor from the passing of an airplane produced in certain weather conditions. These are not trails of chemicals sprayed from a plane. 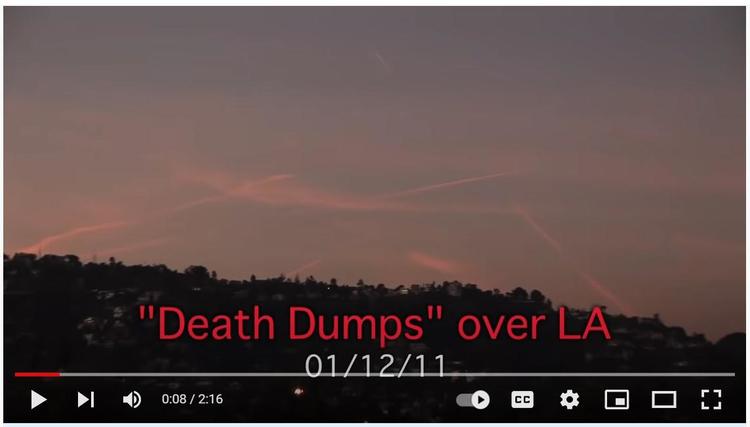 Gunderson blames chemtrails for killing fish and birds and calls it a genocide, a murder by the United Nations -- but he provides no evidence that the fish and bird deaths were caused by "death dumps," that chemical trails even exist or how the United Nations is involved. Expert consensus is that there is no evidence "chemtrails" being used in a "secret large-scale atmospheric program."

At about 0:27, images are shown to illustrate birds and fish dying. These images have not been associated with any cause such as "chemtrails." The image on the left shows a mass die-off of red-winged blackbirds, which happened in a square-mile area on New Year's Eve in Beebe, Arkansas. This mysterious and unusual event, which happened just weeks before Gunderson made the video, was covered by news outlets around the world. The cause of the birds' death was ruled to be blunt force trauma. An article in the journal of the American Veterinary Medical Association explained that the birds, which usually do not fly at night, were roosting in a group of about 1.6 million when it is believed that someone set off fireworks near the roost. The blackbirds' sudden flight even registered on weather radar. The article concludes:

The Arkansas Game and Fish Commission flew over Windwood in a helicopter to gauge the scope of the event. No dead birds were found beyond the initial area of fallen birds.

This would not be the only mass death incident for the blackbirds of Beebe, Arkansas. The following year it happened again on New Year's Eve but not on the same scale.

The photo on the right shows the shore of Mona Lake in Michigan covered with a layer of dead gizzard shad fish. The photo illustrates an article about viral hemorrhagic septicemia, in a January 29, 2011, article on mlive.com. It reported:

The Detroit Free Press and The Detroit News report that the weather and viral hemorrhagic septicemia, or VHS, are suspected in the fish deaths. Researchers from Michigan State University and the University of Toledo took samples of dead shad Thursday and Friday that showed signs of the fish virus.

Gunderson says he has seen the huge planes on the ground at the Air National Guard in Lincoln, Nebraska, and Fort Sill in Lawton, Oklahoma. He does not describe when he saw these planes, how he knew these were planes for spraying "chemical trails" or how the planes were equipped, only that they had no markings on them. The Lincoln, Nebraska Air National Guard is the home of the 155th Air Refueling Wing. The planes are indeed huge. Since 1994 the National Guard wing in Nebraska has operated KC-135 Stratotankers, which refuel other airplanes in flight:

Lead Stories has debunked a variety of other chemtrail claims in the past (here, here and here). Lead Stories reached out to the Air National Guard in Lincoln, Nebraska and will update the article if appropriate.