Does an image of a Russian passport shared on social media in spring 2022 prove that Ukrainian President Volodymir Zelenskyy is a secret Russian citizen? No, that's not true. Analysis of similar images shows that forged passport scans are easy to create with free software if one has a passport-style photograph of a person. Zelenskyy's image in the social media posts was not a passport picture -- it came from an old article about him meeting his wife. Additionally, the image of the purported passport contains a discrepancy between the issuance date and the numbers used to codify it.

The picture of Zelenskyy's alleged Russian passport was published on Twitter (archived here) on March 24, 2022, the day that marked the one-month anniversary of Russia's invasion of Ukraine. The caption said: "Few people remember, but Zelenskyy once received a Russian passport." Here is what the tweet looked like: 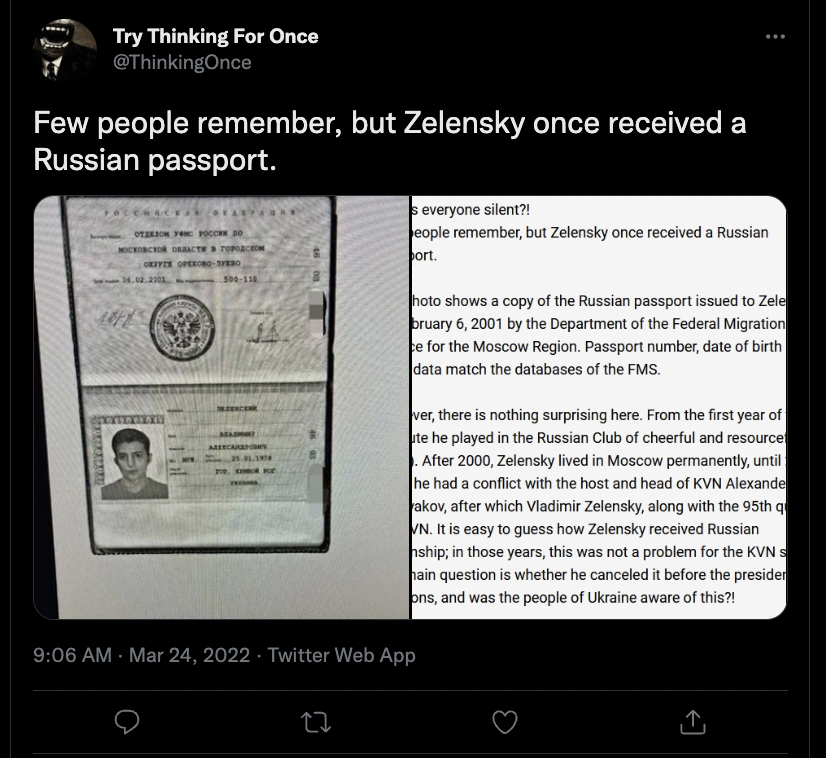 Variations of this English-language claim appeared here and here. Additionally, on April 20, 2022, the same image with a Russian-language caption was posted on Telegram by Ilya Kiva -- a former member of the Ukrainian parliament who was removed from office on March 15, 2022, for making pro-Russian statements shortly before the Russian invasion. Kiva insisted that Russian authorities should prosecute Zelenskyy:

It's in Ukraine [where] he is the president and has, for now, immunity, while for the Russian Federation, he is a simple citizen who has turned into a terrorist and murderer. Zelensky had no right to participate in the presidential election with dual citizenship and him being president is illegal, [but] after all his crimes, it is just a child's prank! 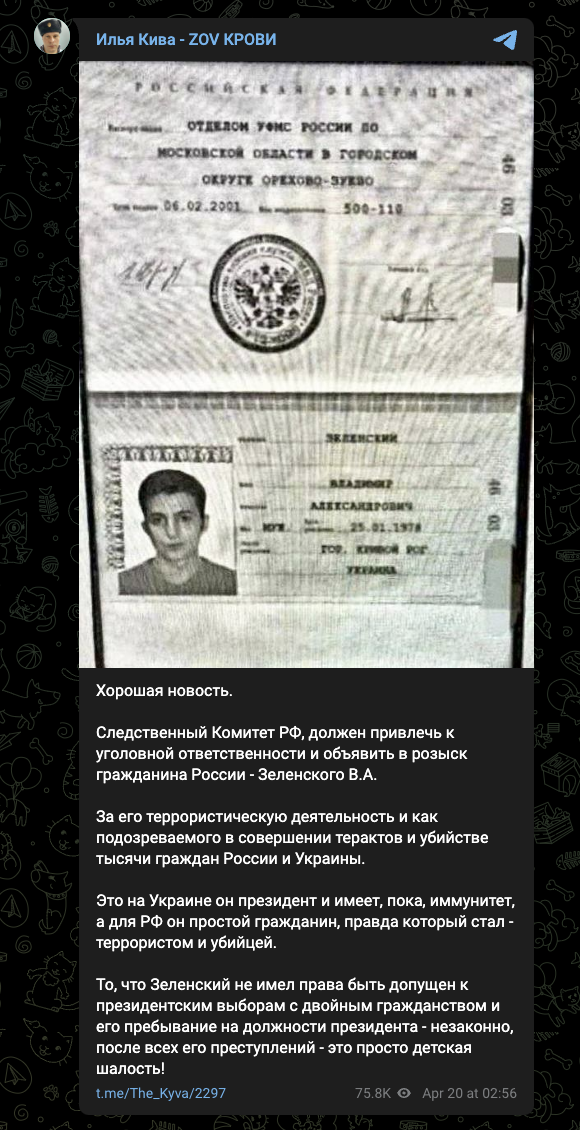 Article 4 of the Constitution of Ukraine says that Ukraine is a country of single citizenship. The law, however, does not explicitly prohibit dual citizenship, and high-ranking officials with multiple passports have long been a source of controversy in Ukraine. However, the picture of his purported Russian passport does not prove that Zelenskyy is one of them.

A reverse-image search identifies multiple pictures of Russian passports allegedly issued to many famous people, including Western politicians and celebrities. These "scanned" copies of the first passport page can be easily created using free template-based software, for example, RF Screater. The problem is that the fake passport templates always put the document stamp in the exact same place on the photograph without variation, whereas the stamp in real passports lands in slightly different spots. American freelance journalist Max Bernhard noticed that the stamp on the first page of Zelenskyy's Russian "passport" exactly matched the template stamp.

The passport picture itself is another weak spot on these fake passports. Paid facial recognition services show that the original photo of Zelenskyy was not in black and white, which Russian passports were required to use back in 2001 when, according to social media, his "passport" was issued. Moreover, it was not a passport picture in the first place. Multiple media outlets have used the original photograph to illustrate articles about the current Ukrainian president (for example, here and here.)

Here is what the original picture of young Volodymir Zelenskyy looks like: 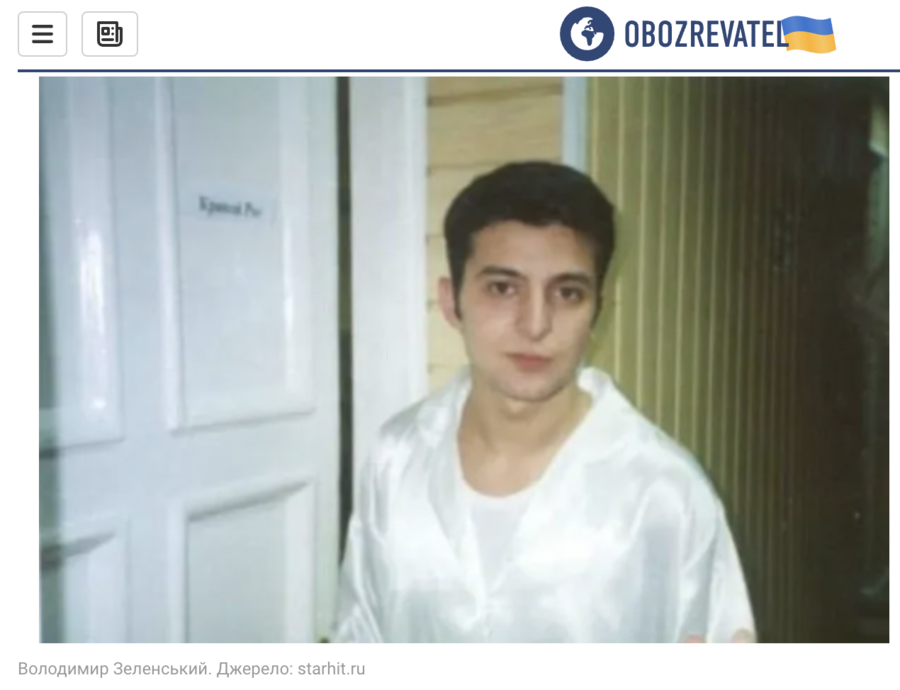 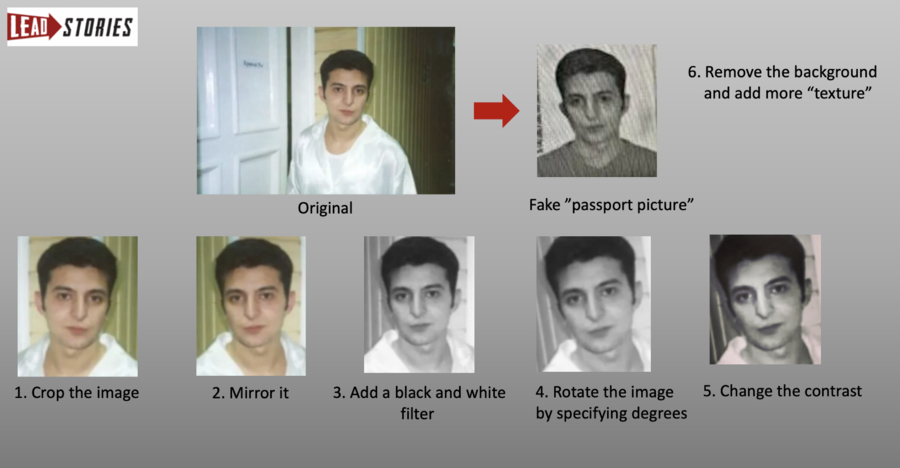 The stamp and the picture are not the only reasons to doubt the authenticity of Zelenskyy's Russian "passport." There is also a discrepancy between the purported document's issue date and the code that is supposed to correspond with it:

In this picture from social media, the code consists of two digits -- 03. They refer to the partial serial number of the form used to print out passports, and this form can slightly change from year to year. The code often reflects the exact year of the document's issuance. However, there might be variations. For example, at the beginning of the following year, some passport offices still use the previous year's code. And if a person receives a passport during the last months of the year, they may get the following year's code. However, the two-digit code is almost never more than one digit different than the last two digits of the actual year. Thus, the purported Zelenskyy passport with an issue date of February 4, 2001, should have the code 01 or 00, not 03 -- that sequence could not have been used until late 2002.

Additionally, the signature shown on the Zelenskyy's alleged passport raises questions, too. Its first letter looks similar to the first letter in the verified signature of the Ukrainian president on a baseball put up for action in the spring of 2022. But the second letter and the stroke connecting the two symbols are quite different, suggesting that the "passport" signature was forged: 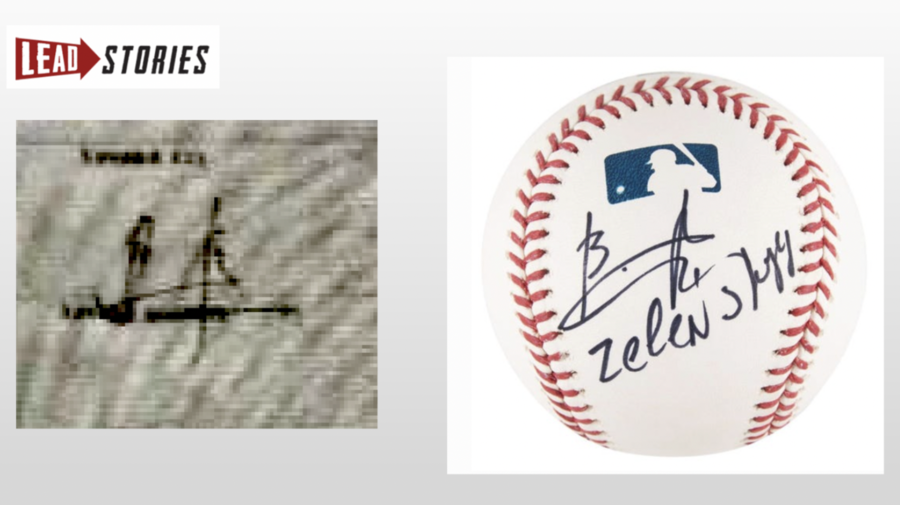