Is it true that a "classified" Azov document proves that over two-thirds of the Mariupol population support Russia? No, that's not true: The link to the English-language article by the state-controlled Syrian Arab News Agency (SANA) did not contain any evidence to support the claim. Multiple discrepancies cast doubts on the authenticity of the shared document allegedly found at one of the Azov regiment bases in Mariupol. The word "secret" in it is spelled in Russian, not Ukrainian. Other details describe previous stages of the Russian-Ukrainian conflict that started with the annexation of Crimea in late February 2014. Moreover, no credible sociological study confirms that more than two-thirds of Mariupol residents hold pro-Russian views.

Donetsk, SANA- According to secret documents of the Ukrainian Azov battalion of Nazi nationalists found in Mariupol, 70 % of the residents, who lived in Donetsk Republic's areas controlled by Kiev, support Russia. 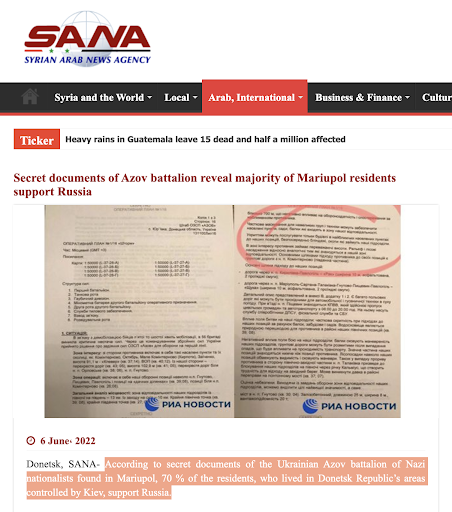 Similar English-language articles were published here and here. They all contained the reference to the document published on Telegram on June 5, 2022, by RIA Novosti, a Russian state-run news outlet.

The Azov Regiment is a Ukrainian unit founded as a volunteer battalion in 2014 that later grew into a regiment. It has been a long-term target of Russian propaganda, and Lead Stories has already debunked other claims related to it here and here. During the siege of Mariupol in spring 2022, Azov fighters retreated to the Azovstal steel plant that remained the last contested territory in the city between April 10 and May 16, 2022.

The publications that shared the pictures of the purported secret document claimed that it was found near school No. 61 in Mariupol, which they described as one of the Azov bases.

However, the city of Mariupol is not even mentioned in the file.

One of the villages the alleged document refers to is Gnutovo (spelled Huntove on the map below). Mentioned as a part of the Ukrainian defense line, it is located more than 20 kilometers (approximately 12.4 miles) away from Mariupol: 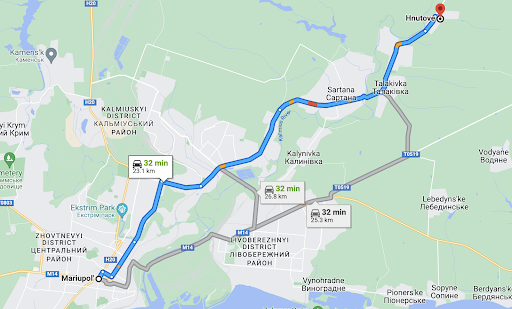 Pyshchevyk, another Ukrainian village discussed in the alleged document, is situated even farther, about 30 kilometers away from Mariupol (approximately 18.6 miles): 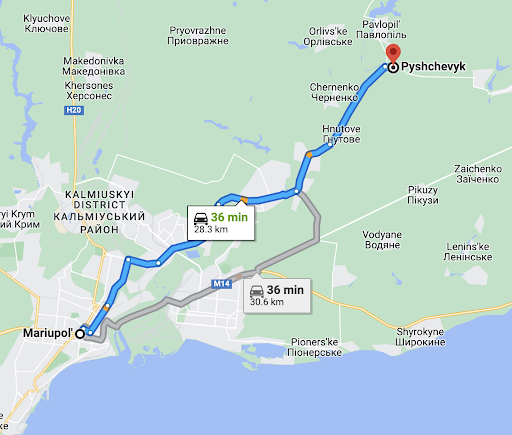 This is not the only discrepancy. Other details suggest that the purported Azov document discusses events that took place seven years ago.

The file does not contain a date, but the combination "131100Lip16" on the first page may mean July 2016: The word "lipen" means July in Ukrainian.

The same page contains a sentence that refers to the same period of time: "Due to the demobilization of fighters from the fifth and sixth waves of mobilization, the 56th Brigade had a critical shortage of forces." By June 2022, after Russia started a full-scale invasion of Ukraine, Kyiv had announced only four waves of drafting. By April 27, 2022, when Azov fighters had been under siege at Azovstal for more than two weeks, Ukraine was still undergoing only the second wave. But in 2014 and 2015, six waves of mobilization took place. In September 2016, Vladimir Talalay, a major general of the General Staff of the Armed Forces of Ukraine and the acting head of the personnel department, said that the Ukrainian army planned to fulfill the need for service members through military recruitment instead of the seventh wave of compulsory conscription.

What is also remarkable is that the stamp that allegedly indicates that this Ukrainian language document is classified uses a word - "cекретно" - that is common in Russian but rarely used in Ukrainian:

At least since 1994, Kyiv has been using the Ukrainian word "таємно" for classification purposes.

The central claim that 70 percent of the population in Ukraine, including Mariupol, are loyal to Russians was also misspelled: "Miсцеве населення налаштоване про росiйськи в 70% випадкiв". When spelled separately, про stops being a prefix and becomes a preposition, a Ukrainian equivalent of "about." Thus, this sentence translates into English as, "The local population is about Russian [not pro-Russian] in 70% of cases."

The key figure -- 70 percent -- raises questions as well. The only open-source mention of such a high level of support of Russia among Ukrainians comes from a November 2014 Radio "Liberty" interview with Victoria Pridushchenko. At the time, she led a Mariupol volunteer militia group that had joined forces with the Ukrainian army to regain control over the city. However, Pridushchenko didn't conduct any polls and omitted the source of her information.

Shortly before the annexation of Crimea in 2014, the Institute of Public Affairs in Warsaw, Poland, surveyed Ukraine on behalf of the German-based Bertelsmann Stiftung foundation. The study debunked the myth about a divided Ukraine. It had been invented about the time of the Orange Revolution (which took place between late 2004 and early 2005) by the same man who would turn into a behind-the-scenes driving force for the "denazification" of Ukraine in attempts to justify Russian aggression in 2022, Timofey Sergeytsev.

According to the Bertelsmann Stiftung poll, the overwhelming majority of Ukrainians described the country as their homeland (93 percent in eastern regions and 99 percent in western regions.) Only 5 percent of the eastern Ukrainian population supported the idea of converting their regions to independent states; in the south, this view was shared by 13 percent of the respondents. But over two-thirds of Ukrainians strongly opposed the idea of their regions becoming Russian territories, regardless of their proximity to the border.

In 2016, the Washington, D.C.-based International Republican Institute collaborated with a Ukrainian nonprofit group, Rating, to conduct another study, supported by Canada's government. According to this dataset, Mariupol and Severodonetsk were the most Russian-speaking cities in Ukraine: 80 percent of their residents didn't use any other languages.

However, a more nuanced analysis of the findings suggests that this figure should not be read as unconditional support of Russia. For example, when asked about the only economic union Ukraine should enter, 34 percent of the Mariupol population said it should be the Eurasian Customs Union between Russia, Belarus and Kazakhstan; but 28 percent that it should be the European Union. The rest didn't express an opinion. A similar picture emerged in Severodonetsk: 36 percent supported close economic ties with Russia, while 26 percent preferred collaboration with the EU. In comparison, in Kyiv, 64 percent wanted to join the EU, and only 6 percent supported the Eurasian Customs Union. Although neither Mariupol nor Severodonetsk demonstrated such a strong preference for pro-European policies, Russia also did not have 70 percent support there.

In 2017, the Ukrainian Center for Independent Political Research concluded that Russian-speaking Ukrainians are not necessarily unconditionally loyal to Russia as a result of their language preferences. According to this study, the language is a significantly weaker predictor of attitudes toward Moscow compared to generational differences in worldviews.