Did the U.S. Navy encounter real UFOs in July 2019 and shoot "hundreds of bullets" at them? No, that's not true: The Navy defined the objects as "unmanned aerial systems" (UAS), or as news reports described them, drones. The objects were originally classified as unidentified, but after May 17, 2022, testimony by Navy and Department of Defense officials and further investigation, it was changed to UAS, a military term for drones. A Navy spokesman told Lead Stories that during the event no weapons were fired at the UAS. The spokesman could not verify the content or origin of a video in an online article.

The UFO claim appeared in an online article (archived here) published on twacy.org on October 26, 2021, under the title "US Navy Destroyers Comes Under Attak By UFOs." It opened:

There's nothing created by mankind that could withstand what the US Navy Destroyers (Arleigh Burke class destroyer USS Kidd DDG-100) dished out on this July night, to those UFOs.

The article does not specify a date in July 2019 when the incident took place. 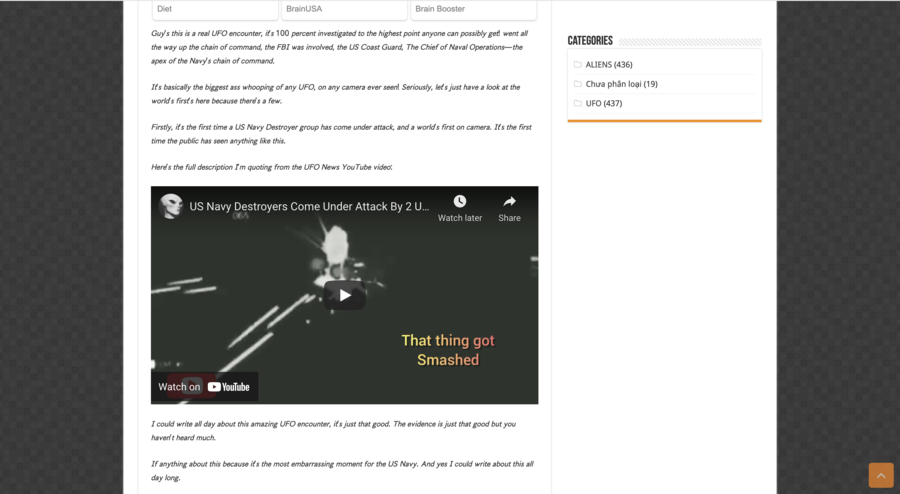 The article claimed that the Navy shot "hundreds of bullets" at a UFO, with the UFO shaking it off and flying away. The YouTube video in this story is used as a source. The black-and-white footage shows what looks like a ship shooting at what the video claims are two UFOs in the sky that emit light. Lead Stories tried reverse image searching a key part of this video, but no results were found.

Lead Stories reached out to the Navy about this claim. A Navy spokesman responded in a June 21, 2022, email:

The Pentagon has previously confirmed that U.S. Navy ships operating off the West Coast of the United States in July of 2019 encountered numerous unmanned aerial systems (UAS) operating in the vicinity of their operations area. The objects sighted were initially classified as "unidentified."

The International Trade Administration defines UAS as air vehicles that do not have a human pilot. These air vehicles are controlled remotely or flown autonomously. News reports by NBC News and the New York Post of Navy/DOD officials testifying before a congressional subcommittee described the objects in more common terminology -- remotely controlled drones.

The email response from the Navy spokesman to Lead Stories continued:

As noted in the May 17, 2022 testimony by Navy and DOD officials before the House of Representatives' Intelligence, Counterterrorism, Counterintelligence, and Counterproliferation Subcommittee, subsequent evaluation by the Department of Defense's Unidentified Aerial Phenomena Task Force resulted in the objects being identified as UAS.

At no time during the 2019 event were any of the objects directly engaged with any weapons.

We cannot verify the content/origin of the video provided in that story.