Is it likely that a church with a sign advocating for a particular vote on an issue will lose its tax-exempt status? Not really: Although the IRS suggests that 501(c)(3) organizations refrain from publicly supporting a particular vote on an issue when it's a part of an upcoming election, an outcome as drastic as the church losing its tax-exempt status for such an action probably won't happen. Churches are prohibited from intervening on behalf of candidates. 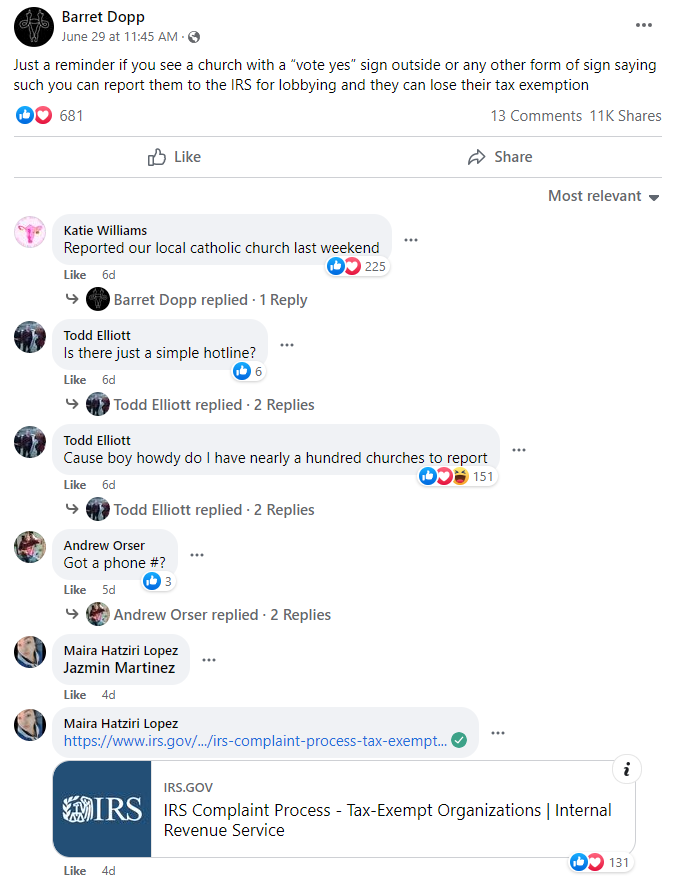 However, political campaign intervention and issue advocacy can be related, depending on the situation in question. In a frequently asked questions resource from IRS.gov about the ban on political campaign intervention, there is an answer regarding whether a 501(c)(3) organization can state its position on public policy issues that "candidates for public office are divided on":

An organization may take positions on public policy issues, including issues that divide candidates in an election for public office as long as the message does not in any way favor or oppose a candidate. Be aware that the message does not need to identify the candidate by name to be prohibited political campaign activity. A message that shows a picture of a candidate, refers to a candidate's political party affiliations, or contains other distinctive features of a candidate's platform or biography may be prohibited political campaign activity.

IRS.gov guidance states that expressing a stance on a particular public policy issue during an upcoming election is risky, although it doesn't appear to be outright prohibited:

A communication is particularly at risk of political campaign intervention when it makes reference to candidates or voting in a specific upcoming election. Nevertheless, the communication must still be considered in context before arriving at any conclusions.

More information about what 501(c)(3) organizations can and cannot do when it comes to political campaign intervention can be found at the links included on this page. Among those links, an online mini-course about the ban on political campaign intervention suggests that urging a particular vote for an issue in an upcoming election should be avoided (see "Issue Advocacy" section). However, as stated above, there is no specific ban on such an action overall.

Lead Stories also found the most notable -- if not the only -- case in which a church had its tax-exempt status revoked due to political campaign intervention. The Church at Pierce Creek, located in New York state and operating under Branch Ministries, Inc., sponsored an advertisement encouraging Christians to be wary of then-candidate Bill Clinton, and the IRS revoked its tax-exempt status. In Branch Ministries, Inc. v. Rossotti, the U.S. Court of Appeals for the District of Columbia Circuit upheld the decision by the IRS, reasoning that the church violated the Internal Revenue Code.