Is there an active public warning alert in Galveston, Texas, to be on the lookout for an "armed and very dangerous" man who attacks women as of June 6, 2022? No, that's not true: While the man seen in the post is genuinely a fugitive from the law, at least one police department has confirmed that the warnings -- across numerous states -- are false. This claim and similar posts have been debunked previously as copycat versions of a misleading social media scam.

The claim appeared in a Facebook post on July 6, 2022. Above a headshot photo of a man, the caption opens:

🚨Warning🚨
The public around Galveston is being warned to be alert. This man is moving around asking for food and help but when you invite him into your home he attacks you after checking if there are no men around. He is on drugs, armed and very dangerous 😭. He attacked an old single mom with a knife 2 days ago leaving her struggling for her life 😭. If you see him please report to the police. Warn others 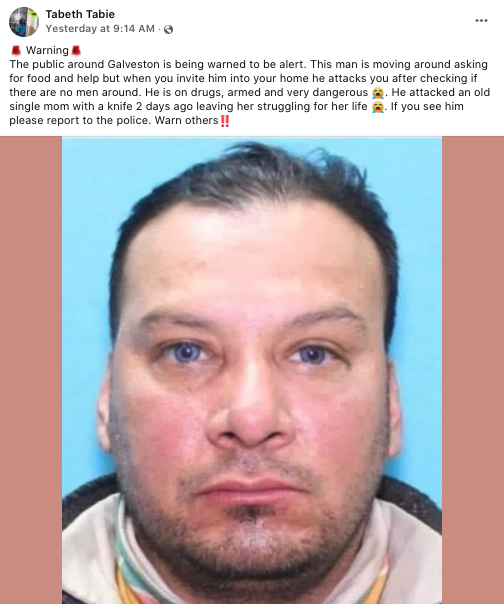 This claim appears in a series of similar scam posts claiming that "very dangerous" men are pretending to be homeless to carry out premeditated attacks on local homeowners.

The man pictured is Raynaldo Farias Tijerina, who in June of 2022 was on the Texas 10 Most Wanted Fugitives List.

The Hattiesburg (Mississippi) Police Department issued a "scam alert" in a June 28, 2022, Facebook post with this exact post and man in the photo. The police department also shared this June 26, 2022, ABC News article titled, "Scam Alert: Social media post warning about 2 homeless men attacking people not real," which depicts similar claims that were deemed to be false.

Lead Stories recently wrote about a similar series of claims to be false in "Fact Check: 'Mr. K Brendon' Is NOT A Real Danger -- It's A Ruse -- Using Canceled 2016 Public Warning." In it, we describe in-depth the ruse used to lure social media users into sharing false content:

The post is designed to trick people to urgently share it from a local online group where it was posted. Commenting is turned off to prevent others from exposing that it is a scam. The original post is bait, to trick members in a local group to share it. The post is then edited to become a misleading locally targeted real estate ad. Often the same photos are used to represent a home for sale in many towns, the same copy and paste personal stories about why the house must be sold are used by the many profiles seeding these morphing and deceptive posts into local groups.