Do recently declassified behind-the-scenes film clips show that the moon landing was really a hoax -- that it was actually filmed on a movie set here on Earth? No, that's not true: This does not show the staging of a massive hoax. These clips were taken from promotional pieces showing what went into the making of the 2018 IMAX movie, "First Man." The high-definition video clips have been modified with post-production filters to make them appear as if they are very old.

This hoax about a hoax has been circulating since at least June 25, 2021, when a Twitter post captioned in Spanish calls the trip to the moon a fraud. It shows several still images, the same scenes that appear in this July 21, 2022, Instagram video from unanswered_universe and weird_bun2020. The post is captioned:

unanswered_universe How do you build trust with someone who's been caught in a lie and still trying to lie their way out of it?
#truth #faith #wisdom #inspiration #realtalk #consciousness #spirituality

The caption on the margins of the video reads:

YOU CAN TELL US NOW
WE ALREADY KNOW 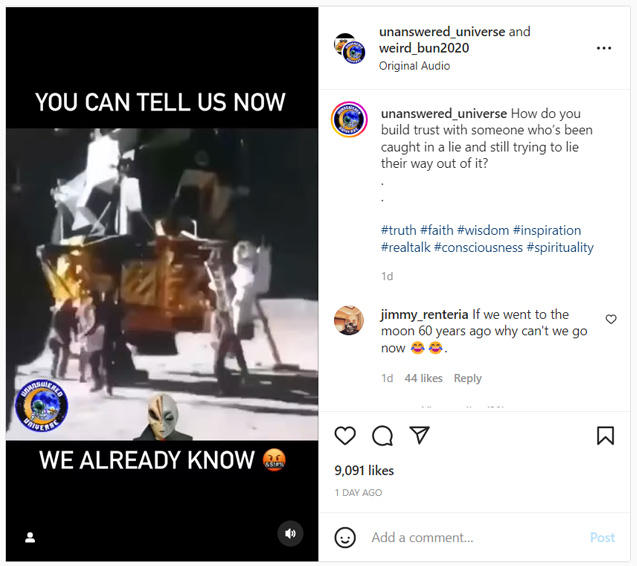 (Image source Instagram screenshot taken on Fri Jul 22 20:53:03 2022 UTC)
The audio track is marked on the Instagram video as "original audio," but the voice in this podcast does not match other videos posted by @unanswered_universe and @weird_bun2020 that are also marked as "original audio" and contain a wide variety of soundtracks. These two Instagram accounts post much of the same content in the same order.
The points made in the podcast audio clip do not provide any evidence that the moon landing is a hoax. The host simply relays two anecdotal skeptical opinions of two unidentified people.

The televised live broadcast of the Apollo 11 moon landing was not beamed from the moon to people's homes. The slow-scan signal was sent from the moon to monitoring stations, then relayed around the world, converted to 30 frames per second for live television broadcast.

Using screenshots from the video, Lead Stories found the Spanish language post on Twitter and eventually a Turkish language dogrula.org fact check article published on April 5, 2022. This article identified the source of most of the grainy footage as behind-the-scenes footage from the 2018 movie "First Man." The scene of the astronaut falling forward and trying to stand up is authentic NASA footage from the 1972 Apollo 16 mission showing John Young on the moon.

On October 10, 2018, the IMAX YouTube channel posted a video titled, "First Man IMAX® Behind the Frame." The high-definition preview includes interviews with the director, Damien Chazelle, and director of photography, Linus Sandgren. They discuss some of the cinematic concepts and techniques involved in the making of an IMAX film, and many scenes include the actors in spacesuits and crew together on the set. 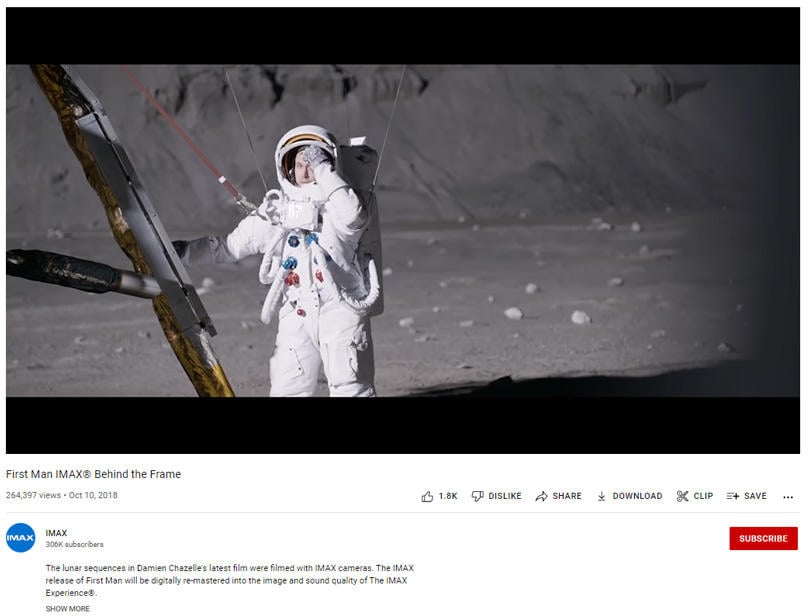 A second video on YouTube, "First Man/ VFX Featurette / DNEG" was posted on Jan 3, 2019. This video has a music soundtrack and shows some of the video effects, including before-and-after shots where undesirable elements like wires or objects in the background have been removed in post-production. At 5:01 in this video is a clip where the astronaut actor is wearing an overhead harness, and the wires can be seen.