Did the Supreme Court finally sign a verdict to impeach Speaker Pelosi? No, that's not true: The clickbait headline for a video that shows multiple republican lawmakers speaking but makes no mention of an impeachment of Pelosi and offers no evidence that it happened. The Supreme Court does not have the power to impeach a legislator, only the U.S. House of Representatives has the sole power to do so, according to the U.S. Constitution.

The claim appeared as a video where it was published on Facebook on July 20, 2022 under the title "Supreme Court 𝐅𝐈𝐍𝐀𝐋𝐋𝐘 signs 𝐕𝐄𝐑𝐃𝐈𝐂𝐓 to 𝐈𝐌𝐏𝐄𝐀𝐂𝐇 Speaker Pelosi 𝐚𝐬 Hunter's Laptop 𝐈𝐌𝐏𝐋𝐈𝐂𝐀𝐓𝐄𝐒 her". It opened with Senator Ted Cruz (R-TX) speaking: 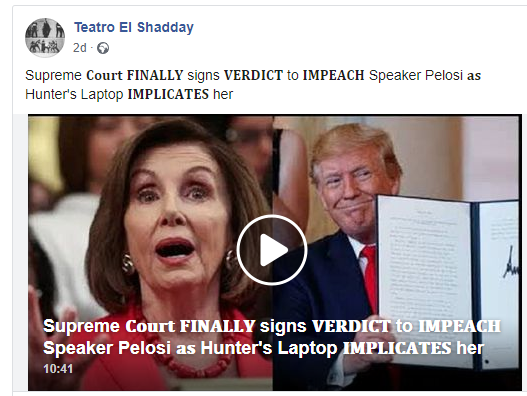 The U.S. Supreme Court does not have the power to impeach elected officials. That power lies with the U.S. House of Representatives according to the U.S. Constitution as cited on the Senate website (archived here):

The United States Constitution provides that the House of Representatives "shall have the sole Power of Impeachment" (Article I, section 2) and "the Senate shall have the sole Power to try all Impeachments ... [but] no person shall be convicted without the Concurrence of two-thirds of the Members present" (Article I, section 3). The president, vice president, and all civil officers of the United States are subject to impeachment.

Lead Stories reached out to Speaker Pelosi for comment and will update the story when a response is received.