Does Amazon host a charity event at the end of the year and distribute random unclaimed Amazon packages for $1.95? No, that's not true: An Amazon spokesperson wrote to us saying that Amazon will sell returns to third-party buyers if the items can't be resold. The buyers then sell such liquidated products to their own customers. The link in this Facebook post does not lead to a website owned by Amazon.

A lot of unclaimed packages mail accumulating at the end of each year.

According to the post, Amazon's rules say that they can throw these unclaimed packages away, but instead, they decide to host a charity event and "distribute" the packages for $1.95. The link in the post claims to lead to the opportunity to fill out a form and receive a pallet of packages.

In an August 12, 2022, email to Lead Stories, an Amazon spokesperson wrote:

At Amazon, the majority of returns are resold as 'new or 'used,' returned to suppliers and sellers or donated. In some instances, we sell returns that cannot be resold to third party buyers who sell the liquidated product to their own customers. 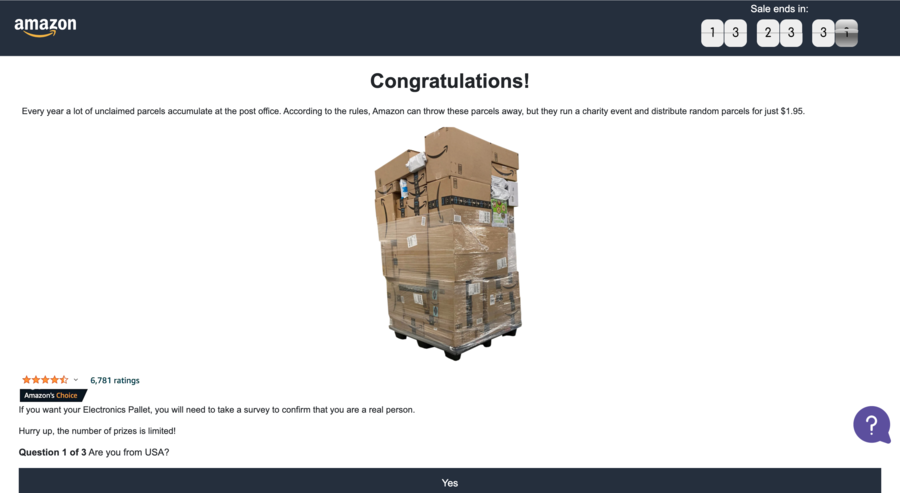 The URL of this page is nabillazhafira.com, which is not Amazon-owned or affiliated with Amazon. Users are also not able to click on the 6,781 ratings that can be seen on the page. That image of the ratings has most likely been photo edited in.

A local news station out of Hampton, Virginia, bought a pallet of Amazon returns from a third-party website that held an auction. This auction was not hosted by Amazon.