Did Amazon's Alexa offer this reply: "Joe Biden died in National Naval Medical Center" when asked: "Where did Joe Biden fall off his bicycle?" Yes, for several days in late July 2022, Amazon's virtual assistant Alexa responded to that specific question with a perplexing answer. But President Joe Biden did not die in July 2022. He fell off his bicycle in Delaware on June 18, 2022, while dismounting. No medical attention was required. The incident happened at a state park near Rehoboth Beach, Delaware. As for the answer from Alexa, an Amazon spokesperson acknowledged the error and said it has been fixed.

Around July 23, 2022, people who had discovered this glitch began to share their own experiments, prompting Alexa with a specific question and recording the results. One person's video was posted to Facebook on July 25, 2022. It is captioned: 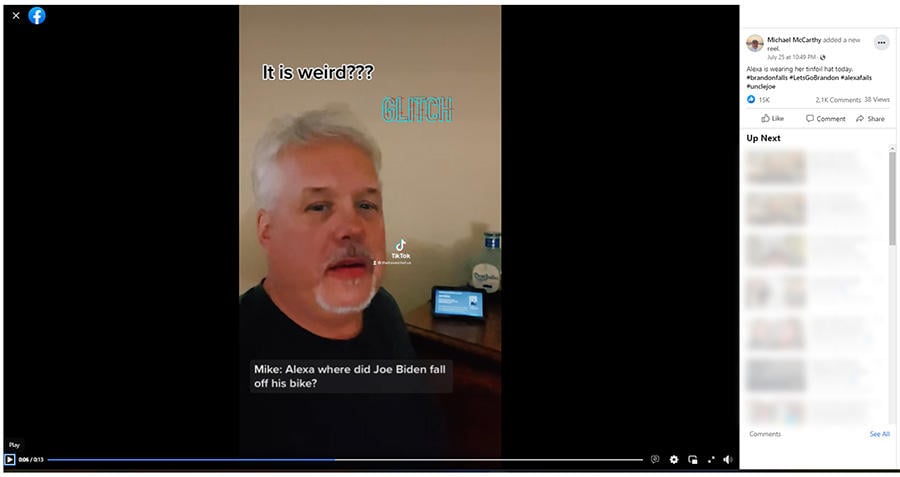 This video is only 13 seconds long. It opens with a man asking the virtual assistant:

Alexa, where did Joe Biden fall off his bike?

Lead Stories reached out to Amazon to ask about Alexa's response in these videos, and received an email on August 8, 2022. The Amazon spokesperson wrote:

This was an error that has been fixed.

Many people posted their own videos of the trending glitch, asking that specific question and receiving an identical response. One version posted to TikTok on July 23, 2022, asked several questions. These seemed to be intended to explore variables to discover the root of the problem.

Q: Alexa, where did Joe Biden fall off of his bicycle?
A: Joe Biden died in National Naval Medical Center.

Q: Alexa, where did Beau Biden fall off of his bicycle?
A: This might answer your question, Beau Biden died in Bethesda on May 30, 2015.

President Biden's eldest son's full name was Joseph Robinette "Beau" Biden III. He died of brain cancer on May 30, 2015 in Bethesda, Maryland at Walter Reed National Military Medical Center. This hospital is the result of the merging of Walter Reed Army Medical Center with the Bethesda National Naval Medical Center, a merger that was finalized in 2011.