Did France 2 intentionally misinform its audiences about an incident in the war in Ukraine on August 10, 2022? No, that's not true: The French TV channel's report about a strike that hit buildings surrounding Ukraine's Zaporizhzhia nuclear power plant overall correctly reflected the situation on that day, but one segment misidentified a building chimney as an unexploded missile. In response to an inquiry from Lead Stories, France 2 shared a statement that admitted a mistake during the video editing process that led to confusion and misinterpretation of that one scene on social media. The channel apologized for the "unfortunate error," but added that the editing mistake "does not change the reality of these strikes ..."

France 2 makes us believe that a Russian missile that failed to detonate hit the roof of the Zaporozhzhia nuclear power plant... The problem is... that it is a chimney.

The tweet contained a 17-second video opening with a video citation from the France 2 report and ending with the images mocking it by showing two chimneys on the same rooftop, with one described as a chimney and another as a missile. Here is what it looked like at the time of writing: 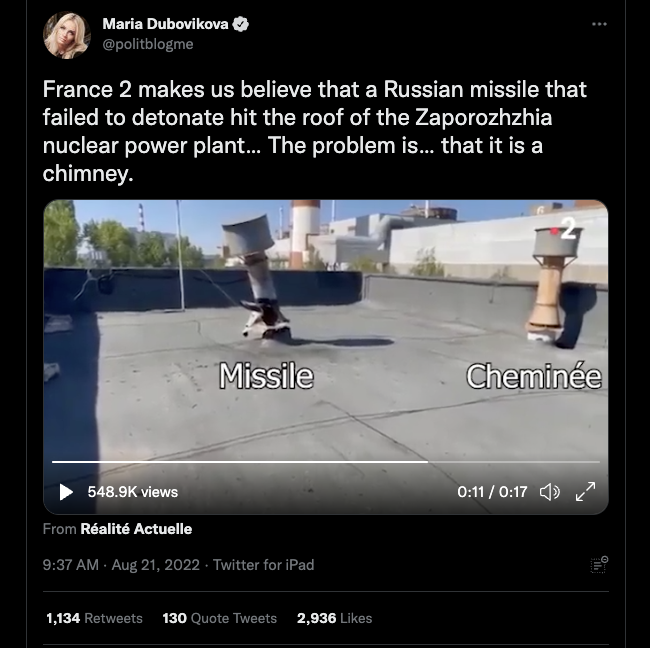 On August 10, 2022, France 2, a French public broadcaster, aired a report on the situation at the Zaporizhzhia nuclear plant during its 8 p.m. show. It opened:

Here is the Google Chrome translation:

A missile, planted in the roof and which did not explode, fell only a few meters from a nuclear reactor Wednesday, August 10. A little further on, a body of shells. Proof that the nuclear power plant in Zaporizhia (Ukraine) is now a battlefield. The damage is the result of bombings suffered by the plant during the weekend.

Simultaneously, France 2 audiences saw this shot, capturing what appeared to be a chimney hit by a missile and the rooftop marked by the signs of shelling: 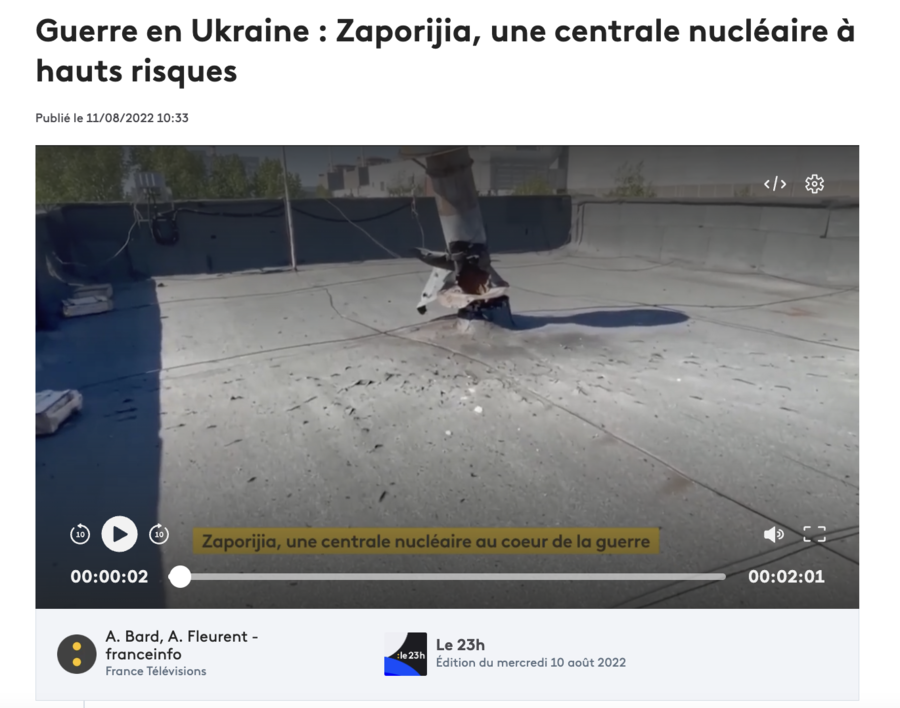 Later, the report showed another image of what appeared to be the remnants of what was used for the strike: 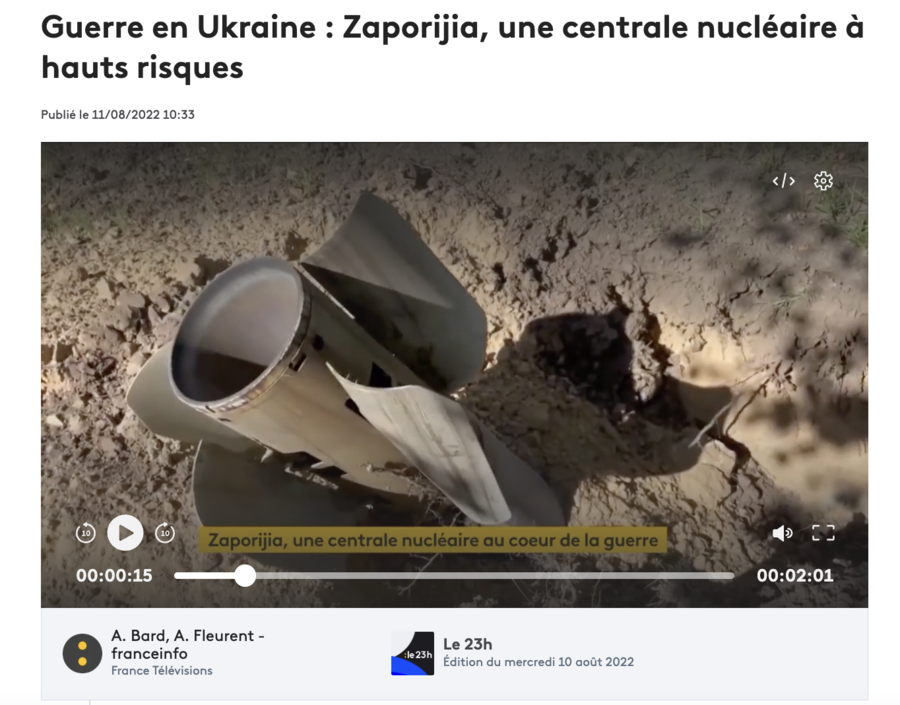 The office of the media ombudsman that serves as a mediator between the public and the state-owned France Télévisions group that includes France 2, replied to Lead Stories via its Facebook page on August 23, 2022, sharing the France 2 statement:

Here is the statement translated to English via Google Translate:

This story was notably produced using images from APTN (a major audiovisual information provider), an agency to which France Télévisions subscribes. These images show the damage caused by one of these strikes. They were accompanied by a descriptive text. By mistake, one of them was misinterpreted. It shows a damaged chimney, not a missile, as said in the commentary. We apologize to our viewers for this unfortunate error, which, however, does not change the reality of these strikes of which we have shown other images.

The same footage was used in the English-language report on France 24, another network owned by the French government that broadcasts in several languages. At the 1:13 mark, the viewers saw the shot of the damaged chimney. While the France 24 reporter did not say what it was and did not discuss where a particular missile landed and whether it exploded or not, he confirmed (at the 1:31 mark) that several shells landed around the nuclear power plant, also pointing out that the international observers were not allowed to the site at the time to assess the situation and the damage.

In addition to the French media, the attacks at Europe's largest nuclear power plant were covered by the AP website, NPR, Politico, the Guardian, ALJAZEERA and Fox News. Their dispatches did not contradict "the reality of these strikes" reported by France 2.

Maria Dubovikova, who published the English-language tweet, is a graduate of the prestigious Moscow State Institute of International Relations and describes herself as a "prominent independent analyst & media expert." However, her affiliations include the Russian Council For International Affairs and the Valdai International Discussion Club associated with Russian President Vladimir Putin. Also known as Maria Al Makahleh, she has a history of engagement with the same projects as Shehab Al Makahleh, a Jordan-based "media adviser for notable personalities in the Middle East" and another Valdai Club expert.

The way this claim spread showed signs of a possible campaign. For example, Dubovikova's tweet was shared by Dmitry Polyanskiy, Russia's first deputy permanent representative to the United Nations. It also appeared on Reddit, Patriots.Win and 9gag. Similar videos were posted on other social media platforms in French (for example, here, here and here) and Russian (here) as well.

Lead Stories has fact checked other controversial claims related to the 2022 Russian-Ukrainian conflict. These materials can be found here.