Were New Yorkers advised to pack "go bags" because there is an immediate threat from "Project Blue Beam"? No, that's not true: While city emergency managers have recommended residents create this type of emergency kit, it's not associated with any imminent or specific concern or threat.

The claim appears in an August 15, 2022, Instagram video on the "unanswered_universe" account page under the title: "What card trick or Project Blue Beam do they have planned for NY ? If there is an eminent threat why not say it?" The post's image includes a flashing graphic of the word, "Warning!" Its video message with a woman saying:

So it seems like the news is telling residents in New York to pack a go bag, just in case they need to leave the city in a hurry and they're asking everybody to have ID, proof of address, a debit card, stuff like that, water, emergency items. What do you think is happening? This is kind of making me think of the Cardi B video that I posted, the conspiracy theory about the tsunami and the flood and everything. What do you guys think? Let me know in the comments, this is kind of crazy. 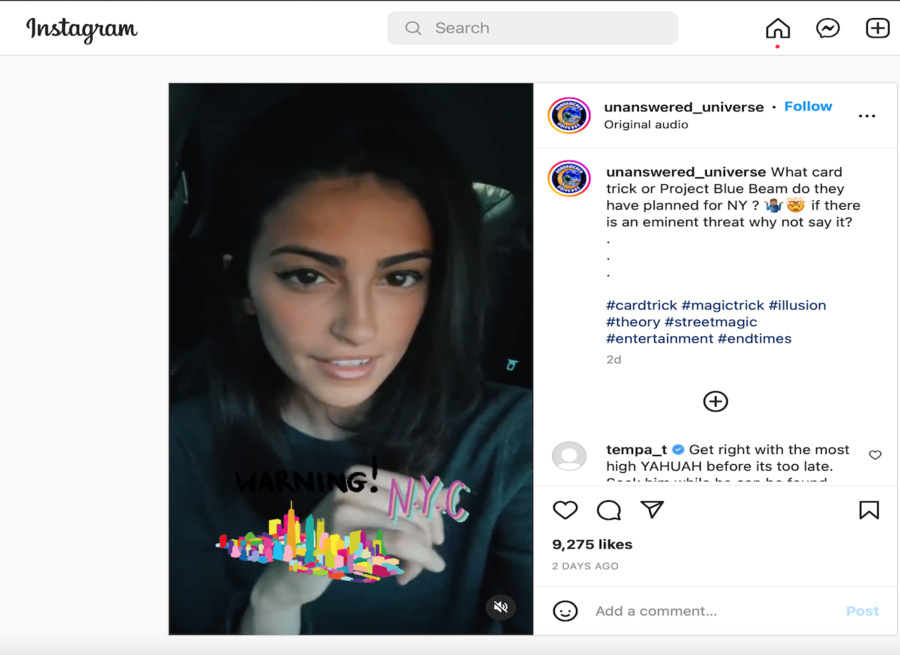 The unanswered_universe Instagram account page says it seeks to address "questions of the unknown" but is also intended for "entertainment not news."

The post, with the woman speaking backed by ominous-sounding music, is misleading on several fronts. First, the speaker states that "the news" is reporting the need to prepare to leave the city "in a hurry," but cites no specific reports to substantiate that. Second, the caption suggests there could be a threat from the long-running conspiracy theory Project Blue Beam, which claims that NASA and the United Nations are plotting to create a new world religion that will ultimately control the masses under a "New World Order."

Project Blue Beam was started by Canadian journalist Serge Monast in 1994 and grew out of his writings on conspiracy theories. Its goal was to establish a satanic religion that replaces national identity with world identity, eliminates artistic and scientific work and establish a one-world government.

And the idea and promotion of go bags, sometimes known as grab bags and emergency kits, by governments is an approach to disaster risk reduction and preparedness that is used worldwide.

In the United States, governments have done some form of emergency planning, including community preparedness actions such as creating emergency kits, since the mid-20th century, said Samantha Penta, an assistant professor in the College of Emergency Preparedness, Homeland Security and Cybersecurity at the University of Albany, in an email to Lead Stories on August 16, 2022.

In the 1940s and 1950s, the focus was on civil defense and preparing for a nuclear attack. Starting in the late 1970s and through the '90s, the focus shifted to natural disasters and has since swung back and forth in response to major U.S. events, she said.

"Typically, emergency managers adopt what is referred to as an all-hazards approach, where they plan for the kinds of disruptions and activities that are consistent across events regardless of the specific thing that caused them, and supplement those plans with more hazard-specific ones," Penta said.

Those could include severe winter storms, hurricanes and tornadoes, wildfires, earthquakes and more.

The New York City Emergency Management Department did publish a Twitter post on July 26, 2022, encouraging residents to prepare a "go bag" in case they had to leave home in a hurry due to an emergency. The post was not made in response to any specific concern, but as part of ongoing emergency preparedness educational efforts, said department spokesperson Ashleigh Holmes in an email to Lead Stories on August, 16, 2022.

"New York City Emergency Management's mission is to educate and prepare New Yorkers before, during and after a disaster," Holmes wrote. "This is part of our continued education and general preparedness tips."

New York's go-bag recommendation and preparedness advice is affiliated with National Preparedness Month activities, which are slated for September 2022, she said.

Among the common items recommended are identification and other important personal documents, medications, flashlights, batteries, bottles of water, and a first-aid kit, she said.